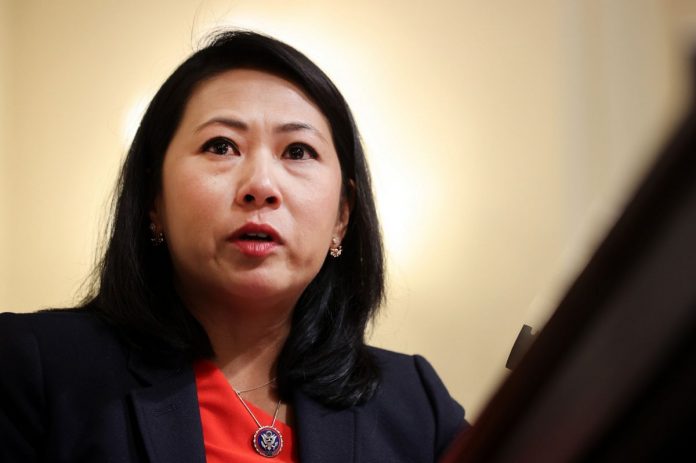 Former Congresswoman Stephanie Murphy, who has business ties to the Chinese Communist Party through her husband’s sportswear company, has been courting donors for weeks to support her campaign for Chair of the Florida Democrat Party.

Earlier this evening Manny Diaz, the Chair of the Florida Democrat Party that oversaw a stinging defeat in the 2022 midterms that saw nearly all of Florida’s 67 counties going for Governor Ron DeSantis, obtaining super majorities in the Florida Senate and House, and flipping several key congressional seats to the GOP, has officially announced his resignation ahead of a planned statewide meeting of Democrats in Maitland, Florida later this month.

According to the ultra-progressive blog Florida Phoenix, Diaz slammed the inability of the party apparatus to engage volunteers, listening to voters, and said the actions of hyper leftwing self-interested influencers led to the historic defeats endured by Florida Democrats in November of last year.

“Volunteer recruitment was not a priority,” he notes. “There was no energy or sense of community or urgency. Recruiting, training and building volunteers seemed to be an afterthought. Large events and recruitment efforts, traditional tools for capturing volunteers, did not exist. We have plenty of social media activists, not roll-up-your-sleeves volunteers. We communicate virtually, not personally.”

During the 2022 elections, candidates on all levels, from the race for Governor of Florida, state level cabinet posts, congressional seats, state legislature, and local governmental offices promoted the most far-left agenda ever presented to voters in Florida by Democrat candidates.

This journalist wrote a book about her connections to the Deep State, the power of the political donations from the family she married into, and how she managed to materialize out-of-nowhere in 2016.

You can read it for free below.

She also famously blamed the COVID-19 pandemic on President Trump, advocated for the removal of tariffs placed on China, chastised legal immigrants for wanting a secure border, and was one of the members of the J6 hoax committee that harassed hundreds of people on the basis of lies and concoctions of the mainstream media and her colleagues in the Democrat party.

However, Murphy has always billed herself as a moderate and has done a remarkable job in Central Florida snowing voters with this lie during her three terms in the United States House of Representatives.

She was a leading member of the sham J6 Committee that targeted the likes of Trump advisor Roger Stone, Stop The Steal activist Ali Alexander, General Michael Flynn and so many others.

Murphy’s father in law has been a mega donor to Barack Obama and then Mitt Romney in 2012, after Obama cracked down on for-profit universities, from which Murphy’s family derives its immense wealth due to their ownership of Full Sail University in Winter Park, Florida.

In recent months, Murphy has been calling major political donors in Florida expressing her interest in leading the Florida Democrat Party, parroting the same lie she pimped to voters during all three of her campaigns for US House in Central Florida. She is pragmatic, she is a moderate.

Only this time, she has found herself in a prime position to take over the Florida Democrat Party, highlighting the gobs of cash her father-in-law can donate to the coffers which have been tapped out since the Democrats have gone further to the left than Karl Marx. As a former elected official, she also qualifies to run for this position according to the bylaws of the Florida Democrat Party.

Murphy’s move to take over the operations for Florida Democrats should not be taken lightly. She has the family money and connections to foreign interests in the Chinese Communist Party who want to keep the United States on the tit of the CCP, albeit under the veil of a “moderate” leader.

She was in fact a member of the “Problem Solvers Caucus” and the leader of the “Blue Dog Democrats,” the first of which is a front for the UNIPARTY establishment, and the second which, has allowed Democrats in vulnerable seats to claim they are seeking the “middle ground” in the American body politick.

Just a few days ago, MSNBC (not surprisingly) released a feature piece on Murphy detailing her exploits in public office and stating how she is focused on being a mother to her young children, while not ruling out a future in politics.

With former openly gay, and far-left, Democrat State Representative Carlos Smith’s name being thrown around as a potential contender to lead the Florida Democrat Party, we should not be fooled into thinking that her candidacy would be anything different than a foreshadowing of a desolate reality where Florida turns into a Marxist hellhole like California, Illinois, or New York.

She just cleans up her radical America hating agenda with a St. John pantsuit and deep pockets.