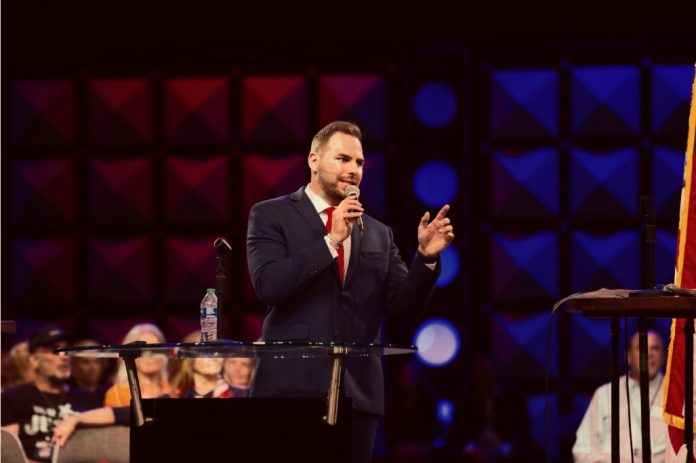 **FIRST PUBLISHED ON THE GATEWAY PUNDIT**

Jackson Lahmeyer, the Oklahoma United States Senate candidate who took on anti-Trump incumbent James Lankford, has launched a new organization to rally the evangelical faithful to President Donald J. Trump’s corner ahead of the 2024 GOP primary.

President Trump has long ties to the Christian evangelical community, despite what the fake news media wants to say.

Pastors for Trump, is geared towards organizing Christians across the United States.

Pastor Jackson Lahmeyer created the coalition to help recognize the efforts of millions of Christians across the United States in the political process and to provide a way to advocate for issues central to the faithful including the importance of life, marriage, freedom of speech, and personal responsibility.

Lahmeyer is joined by Pastor Craig Hagin, who is co-pastor of Rhema Bible Church and Chief Operating Officer For Kenneth Hagin Ministries and Pastor Mark Burns, Co-Founder & CEO of NOW Television Network, a Christian television network based out of South Carolina that reaches 11 million homes named by Time Magazine as “Trump’s’ Pastor.”

Hagin and Burns will serve on the Board of Directors for Pastors for Trump. Pastor Lahmeyer told this GP journalist the following.

“President Trump made it clear during his 2016 campaign for President of the United States that he was committed to bringing Christian leaders into the fold.

During his historic first term, he proved that he would deliver on the promises he made. Heading into 2024, it is more important now than ever to reaffirm the strength of the Christian faith and our willingness to support President Trump in his fight to return to the Oval Office” explained Lahmeyer.

Pastors for Trump is also promising to organize rallies across the United States, shared prayer chains, and open admission for those who would like to join their efforts.

Even though they just launched this week, Pastors for Trump has over 250,000 congregants in their flock, with representatives in nearly every state in America.

Lahmeyer also served as the Oklahoma State Coordinator for the Billy Graham Evangelistic Association leading more than 300 churches across Oklahoma to get engaged and fight for conservative values.In 2021-2022, Lahmeyer was a candidate for the United States Senate in Oklahoma and received endorsements from many America First Patriots including Roger Stone, Rudy Giuliani, John Paul Mac Isaac and Sebastian Gorka.

Learn more about Pastors for Trump by clicking here.