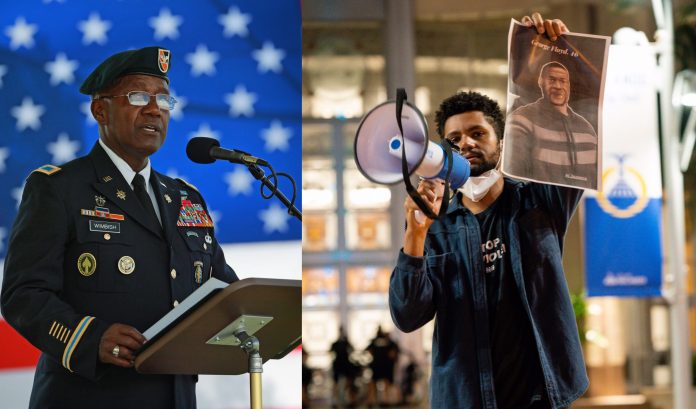 Can a Green Beret and decorated combat veteran stop a known gun-grabber from joining “The Squad” in Washington DC?

*First appeared in The Gateway Pundit*

In Central Florida’s 10th congressional district, voters have a clear choice when they head to the polls this November for the 2022 mid-term elections.

The Democrat nominee Maxwell Frost is a 25-year-old Gen Z gun control activist who won the August primary elections with support from socialist Vermont Senator Bernie Sanders and a collection of far-left progressive organizations who spent hundreds of thousands of dollars to help him secure 34% of the vote in a contest that featured two former members of congress and seven others vying for the Democratic nomination.

Frost was a leader with the March for Our Lives activist organization that is demanding unconstitutional gun control measures and has even supported the total disarmament of American citizens. He has proudly supported the domestic terrorist activists of Black Lives Matter and Antifa, even getting arrested during violent demonstrations in Washington DC last year.

He also supports open-border policies that have allowed caravans of illegal immigrants flow across our Southern border and the distribution of deadly drugs like Fentanyl across America. When it comes to the indoctrination of our youth in public schools, Maxwell Frost supports the inclusion of pornographic books in school libraries and the teaching of Marxist ideologies like Critical Race theory.

As far as unconstitutional lockdowns and mandates that destroyed small businesses across the United States, Frost is a known Covidian. He cheered on the closures, did nothing to address the health risks associated with the experimental vaccines, and failed to stand up for law enforcement officers or first responders who lost their jobs for refusing to comply with mandatory vaccine requirements.

Maxwell Frost’s connection to The Squad also derives from his connection to Sunrise, which is under the control of Justice Dems and serves as its sock puppet to run operations against the Democratic Party.

Frost is close with Sunrise personally and through “March for Our Lives.” pic.twitter.com/4ZIxEeJjNi

Frost aspires to be the first “Gen Z” member of congress and has signaled that he would align himself with “Squad” members Ilhan Omar, Rashida Tlaib, and AOC if elected in November.

In contrast, Calvin Wimbish, a retired Army Colonel and Green Beret who earned a Bronze Star, served in the United States Army from 1971 to 2012, including combat roles in Iraq and Afghanistan. He calls himself a “Frederick Douglas Republican” and currently works as an educator and instructor with the local chapters of the Army’s JROTC (Junior Reserve Officers’ Training Corps).

Colonel Wimbish spent the primary campaign for the GOP nomination signaling his support for the America First agenda, standing against the Defund The Police movement supported by Maxwell Frost and “The Squad”, and highlighting how he has never cowered to challenging circumstances.

And his battle with Gen Z gun control Maxwell Frost will certainly be a challenge. Registered Republican voters currently stand at just under 100,000 voters, while registered Democrats account for 203,000 of voters. Independent voters with no-party affiliation round out the voter rolls with 134,000 currently registered voters.

While CD10 has changed slightly due to the recent redistricting, there remains a large amount of African-American Democrat voters who Maxwell Frost, part Black and Cuban, needs come election day. However, many of those voters are on opposite sides of Frost when it comes to his support for LGBT indoctrination and pornographic books in public schools, along with those voters being opposed to Frost’s support for children to secretly undergo transitional surgery without parental consent.

Not to mention how many African-Americans in the district are small-business owners or entrepreneurs who reject the Marxist Critical Race Theory idea that they are victims and should be engaged in anti-White victimhood in order to achieve success in life.

There also remain concerns within the Black community about progressive Democrat attacks on the funding of charter schools, as many public schools within the district are plagued by the prevalence of criminal elements.

This is where someone like Wimbish, a decorated military veteran, and educator with two master’s degrees, can make his case to the African-American voters in CD10. With crime on the rise across America and in Central Florida, Wimbish argues that Frost’s anti-2A policies could leave voters in his district “unarmed” and at risk.

“The African-American community across the United States and in the 10th district deserve new leadership. Democrats have strung them along with broken promises and the lack of access to the resources they need to achieve their dreams.

Mr. Frost’s radical, and unconstitutional, gun grabbing policies would leave citizens unable to fend off the criminal element that will gladly snuff them out for a few dollars.

Unfortunately, they have been told that Republicans are the root cause of the problems the community faces on a daily basis and I will change that perception. It’s all about opportunity, hard work, and restoring our trust in God over the state,” Wimbish told this Gateway Pundit journalist.

Polling has also shown that Independent or no-party affiliation voters (134,000 in CD10) are very turned off by the mainstream media, Biden administration, and congressional democrats divisive rhetoric about President Donald J. Trump. They also have expressed concern over how the Biden administration has stifled small business owners, labeled concerned parents “domestic terrorists”, and celebrated the lawlessness currently being allowed to spread across the United States by cities or states that have adopted progressive soft-on-crime policies.

If Wimbish is able to address these community concerns and mount a well-funded campaign, he has a unique opportunity to stop “The Squad” from getting a new member in Washington DC who will give voters the same old political doublespeak who has left them without aggressive representation for decades.