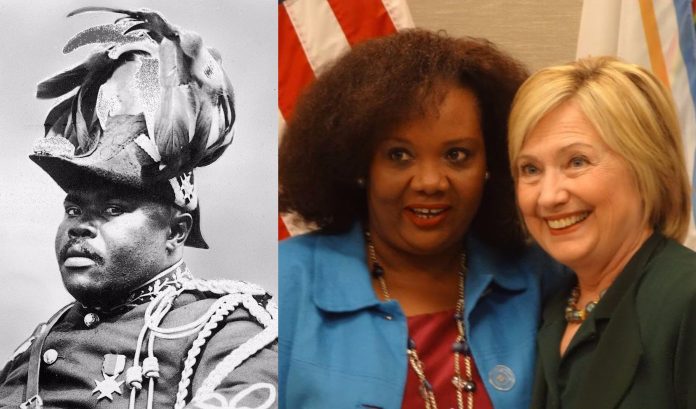 Dr. Karen Green, the Vice Chair of the Florida Democrat Party and current Democrat nominee in Florida’s 7th congressional district, has a colorful history, to say the least. She believes Governor Ron DeSantis wants to put African Americans in bondage and that the ghost of Black Nationalist leader Marcus Garvey “lives inside” her.

Even as the majority of Democrats across America and in the state of Florida are looking to political newcomers to represent them in the upcoming midterm elections, Democrat voters in Florida’s 7th congressional district picked someone who has spent close to fifteen years as political operative.

Dr. Karen Green was a Regional Field Director for Barack Obama’s 2008 presidential campaign in Florida, spent years working for his political committee Organize for America and was the Caribbean Director for both Obama and Hillary Clinton’s campaigns.

Green even handled advance for Bill and Hillary Clinton during the 2016 campaign in the Caribbean territories as well.

When Hillary was at risk of a credible convention fight from Vermont Senator Bernie Sanders during the Democrat National Convention, Dr. Green was a top lieutenant for Clinton, helping her whip delegates for the former Secretary of State who many believe stole the nomination from Sanders through intimidation of delegates and improper use of Democrat party resources that were available exclusively to the Clinton campaign.

Not surprisingly, Green is a rabid Covidian who tweeted in 2020 that anyone who questions the efficacy of the COVID-19 vaccines or Dr. Anthony Fauci’s dishonest  and dangerous manipulation of the American people during the pandemic as “dangerous brainwashed deniers.” She also bought the phony Russian collusion delusion that led to the first sham impeachment against President Donald J. Trump, regularly RT’ing some of the most ridiculous hot takes from pencilneck Congressman Adam Schiff of California. When it comes to discussions about gang or drug related gun violence, which account for the majority of gun violence instances in the United States, Green thinks that it’s a “racist trope”, because talking about criminals committing mass shootings in predominantly Democrat controlled minority populated cities is off limits. And when it comes to Governor Ron DeSantis, Dr. Karen Green has a whole lot to say. During an interview with The People’s Chat Room in late April of this year, she claimed that Governor DeSantis’ efforts to get “WOKE” racial, political, sexual politics out of public schools led to math and science books being removed.

Of course, the “Stop WOKE Act” and “Parental Rights in Education Act,” which Governor DeSantis signed into law earlier this year, did not remove math or science books from schools, it simply prevented educators from indoctrinating or sexualizing the children.

Green then stated that this was exactly like how slaveholders would forbid slaves from becoming educated and that Governor DeSantis wanted African-Americans to be placed in “bondage” and that Republicans like DeSantis want to return the United States to the post Civil war Jim Crow era laws that enforced segregation and were used by many Southern states to prevent African-Americans from voting.

That’s just absolutely insane, but in the modern Democrat party, everything that is antithetical to their race baiting, division sowing, anti-American policies is RACIST.

In the same interview, Green said that she believes that Hispanic voters abandoning the Democrat party in droves, or more specifically the history of Cuban Americans voting against Communist / Marxist ideologies are the result of “propaganda”, not the fact that many Hispanic immigrants fled Socialist / Communist / Marxist dictatorships for the freedoms we are granted in the United States of America.

The most bizarre part of the wide-ranging “People’s Chat Room” interview with Dr. Karen Green came when she claimed that dead Black Nationalist icon Marcus Garvey ghost, who was a racial sepreratist who supported segregation, was “inside her” and that she was the “steward” of his spirit.

Garvey was a proponent of the “Back to Africa” movement that advocated for Black people to return to Africa. He was also known as a supporter of segregationist Jim Crow laws, for his collaboration with the Ku Klux Klan, and for his prejudice against mixed-race people and Jews.

Garvey’s activism and teachings largely influenced the Black Power movement and leaders of the Nation of Islam, both of which are violent anti-white forerunners to the more commercialized current Black Lives Matter movement that promotes the violence and hatred against White Americans, law enforcement, and anyone who refuses to abide by the lawless, riotous, and Marxist landscape they are pushing the United States toward.

As Javier Manjarres of The Floridian Press reported earlier this week, it’s unlikely that Green will be able to put up much of a fight against GOP nominee Cory Mills, a decorated combat veteran who self-funded his campaign to the tune of $1.5m and has gone on record stating that he is willing to cut himself another check to win the general election.

Green has a negative balance in her campaign account and raised around $30,000 during her primary campaign, of which $12,000 came in the form of a loan she gave to her own campaign.

However, popular progressive state legislators like Representatives Carlos Guillermo Smith and Anna Eskamani have endorsed her campaign, so it’s possible they could use their army of volunteers to assist Green’s campaign against Cory Mills. It’s also likely that CD10 nominee Maxwell Frost, a Gen Z anti-gun political activist, could direct a sizable amount of financial resources towards Green’s campaign since he will more than likely retain Val Demings seat in the heavily Democrat district.

We recently wrote about Mr. Mill’s primary victory, which you can read here.

At the end of the day, Republicans in Florida’s 7th district (which includes all of Seminole County and some parts of Volusia County), should not let their foot off the gas. Adopting a complacement approach because Green’s campaign has shown little financial strength so far is not a smart move.

Emgage is widely credited for their volunteer efforts that led to the election of Minnesota Congresswoman Ilhan Omar and Michigan Congresswoman Rashida Tlaib in 2018. She could also tap her longtime connections to Clinton world or her former Billionaire boss Michael Bloomberg to raise campaign cash in short order.

And who knows, Green could conjure the ghost of Black Nationalist Marcus Garvey to help her mount a revolutionary challenge to GOP nominee Cory Mills…