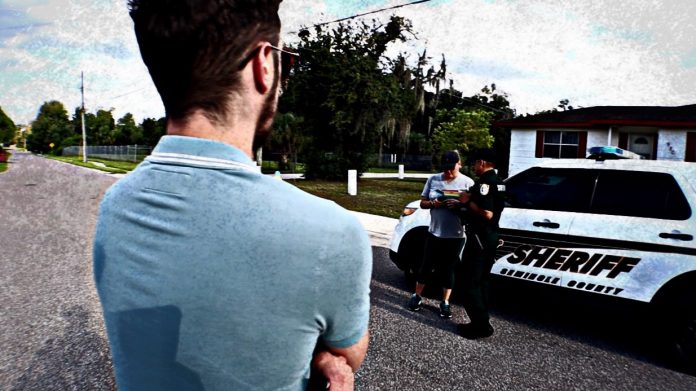 Jen Cousins, who is a lead plaintiff suing Florida Governor Ron DeSantis, claimed in a 911 phone call to the Seminole County Sheriff’s Office that this journalist had threatened to come to her home, is a Nazi, and very DANGEROUS person.

On August 15th, the Central Florida Post confronted Jen Cousins (Jennifer Cousins), over her advocacy to place filthy pornographic novels like Gender Queer back in public schools across the state of Florida. Cousins, a co-founder of the pro-porn and grooming non-profit Florida Freedom To Read responded by calling police, lobbing several false allegations against this journalist in an effort to elicit an aggressive response from law enforcement.

This journalist was forced out of an Orange County Public School meeting in October of 2021 for reading passages of the book during public comment, which Chairwoman Teresa Jacobs claimed was “not appropriate.”

Cousins has claimed in several interviews and social media posts that Gender Queer does not contain pornographic imagery or written text, despite the fact that the graphic novel discisses and depicts countless sexual interactions. Anyone with eyes knows that Cousins is lying, but that has not stopped her from continuing her lies in pursuit of placing pornographic material in the hands of children in Florida without parental consent.

Thankfully, the Seminole County Sheriff’s Office responded with professionalism, quickly realizing that Ms. Cousins’ claims were unfounded and ridiculous.Her allegations were so preposterous, that they didn’t even file any additional documentation past submitting a basic incident report.

We did not threaten to come to her home, we are not Nazis, and have never done anything to Jen Cousins that would lead her to think that we would do anything to harm her. Of course, that does not stop rabid leftists like Cousins from having hyperbolic meltdowns when confronted.

This journalist has since submitted a supplementary statement to the SCSO addressing Cousins false claims and is calling on the agency to prosecute Jen Cousins for making those false claims.

Florida Statute Section 817.49 states that it is a criminal offense for a person to willfully and knowingly give false information or make a false police report concerning a crime that the person knows did not actually take place. An individual can also be charged with this crime if they cause a false report or information to be given to police, even if they did not personally deliver the information.

If you would like to urge the agency to investigate Jen Cousins for making false claims to law enforcement, you can do so by emailing Public Information Officer Bob Kealing at bkealing@seminolesheriff.org. Please be respectful and kind in your communications.

As evidenced on the bodycam and below video, Cousins was appearing at a public park to do a campaign walk for Sarah Henry, who is one of her non-profit’s endorsed legislative candidates in the upcoming midterm elections.

In recent months, Cousins has led clandestine and secretive book drives for public school librarians to procure books that aim to sexualize children, indoctrinate them with pro-CRT beliefs, and encourage them to be hyper-focused on gender identity politics. This journalist reported on Cousins in relation to these book drives for The Gateway Pundit.

We have been at odds with Jen Cousins and her cohort of Covidian mask mandate, forced vaccine, and lockdown proponents for more than a year in Central Florida. They pushed to keep schools in a state of fear over COVID-19, while also holding several abortion parties across the region, where pro-abortion advocates pushed for unfettered killing of the unborn after trickling out of bars liquored up and incensed.

Cousins, like many modern era Biden Democrats, thinks that parents upset about the indocrination of their children in public schools are “domestic terrorists”, after the National School Boards Association lobbyied the Biden administration to label parents concerned about the sexualizing and politization of children as “domestic terrorists”, which Chris Rufo addressed on The War Room with Steve Bannon in 2021.

Chris Rufo Unleashed: “They’ve Now Targeted Our Kids – Classified Our Parents Domestic Terrorists. We’re NOT Going to Back Down” (VIDEO)

She is currently represented by Lambda Legal in her lawsuit against Florida Governor Ron DeSantis, which put out a book teaching gay youth how to visit “gloryholes”, so that they could engage in anonymous sex.

They called it the “Little Black Book.”