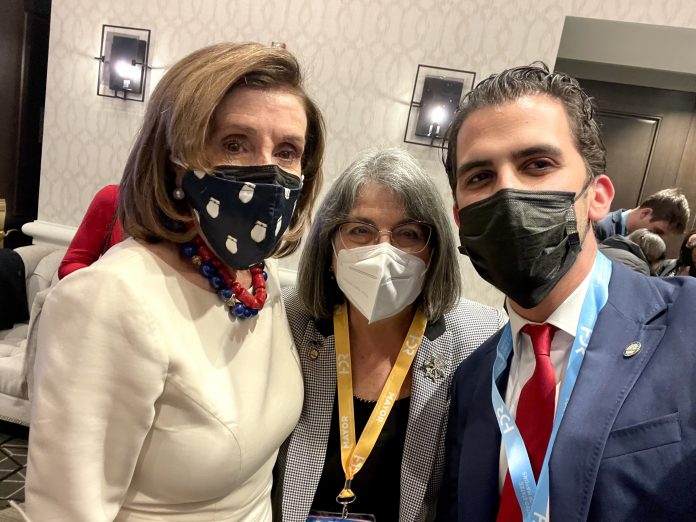 Andrew Gillum’s former Youth Director, Manny Orozco Ballestas, who we exposed for a series of disturbing social media posts in 2018, has changed his name to Manny Orozco and currently works as the Special Aide to progressive Miami-Dade Mayor Daniella Levine Cava.

After Democrat Andrew Gillum secured the nomination for Governor in 2018, the Central Florida Post published a series of exposes about Manny Orozco Ballestas, who Gillum had just appointed as his Youth Outreach Director.

Our research identified a series of posts, starting with a picture of Orozco Ballestas in a t-shirt that labeled states that voted for Donald J. Trump in the 2016 presidential election as “Dumbfuckistan.” While this demonstrated that Orozco Ballestas was closed minded and believed that Trump voters were not a real part of America, it was not nearly as disturbing as what we discovered three days later.

Orozco Ballestas spent years tweeting about rape, assasinating Donald Trump, and fat shaming women. But even those tweets were not rock bottom for the Youth Outreach Director for Andrew Gillum’s gubernatorial campaign in 2018 against Republican Ron DeSantis.

In early 2012, Manny Orozco Ballestas shared a meme describing how babies using pacifiers were preparing to perform oral sex on him. After we reported on Orozco Ballestas tweets, Gillum’s campaign removed him from his position as Youth Director, despite spending days saying our initial reports on the Central Florida Post were both untrue and politically motivated.

And just a day before the 2018 election was held in Florida, the Orlando Sentinel did a puff-piece on Orozco Ballestas, presumably preparing for a Gillum victory over Ron Desantis. Of course, they allowed Orozco Ballestas to play the victim and omitted any discussion about his pedophliac tweet.

Andrew Gillum ultimately did not win the election against Ron DeSantis, despite efforts from two Democrat Supervisor of Elections in South Florida “finding” mysterious caches of ballots that were overwhelmingly pro-Gillum. We were proud to be on the ground with investigative journalist Laura Loomer and hundreds of patriots exposing this 2020’esque scheme, helping then Congressman Ron DeSantis become Governor of Florida.

Following our reporting on Manny Orozco Ballestas in 2018, and his subsequent firing from Gillum’s campaign, Orozco Ballestas appears to have moved to Miami-Dade County in South Florida, where he worked on the 2020 mayoral campaign for Daniella Levine Cava, who would go on to become Mayor.

She hired Manny Orozco Ballestas to be her Special Aide and assist her office with media relations. However, by this time, Orozco Ballestas was going by “Manny Orozco”, likely to evade discussions about his social media posts that we exposed, including the pedophiliac tweet about infants use of pacifiers was somehow early preparation for them to perform oral sex on Orozco Ballestas. 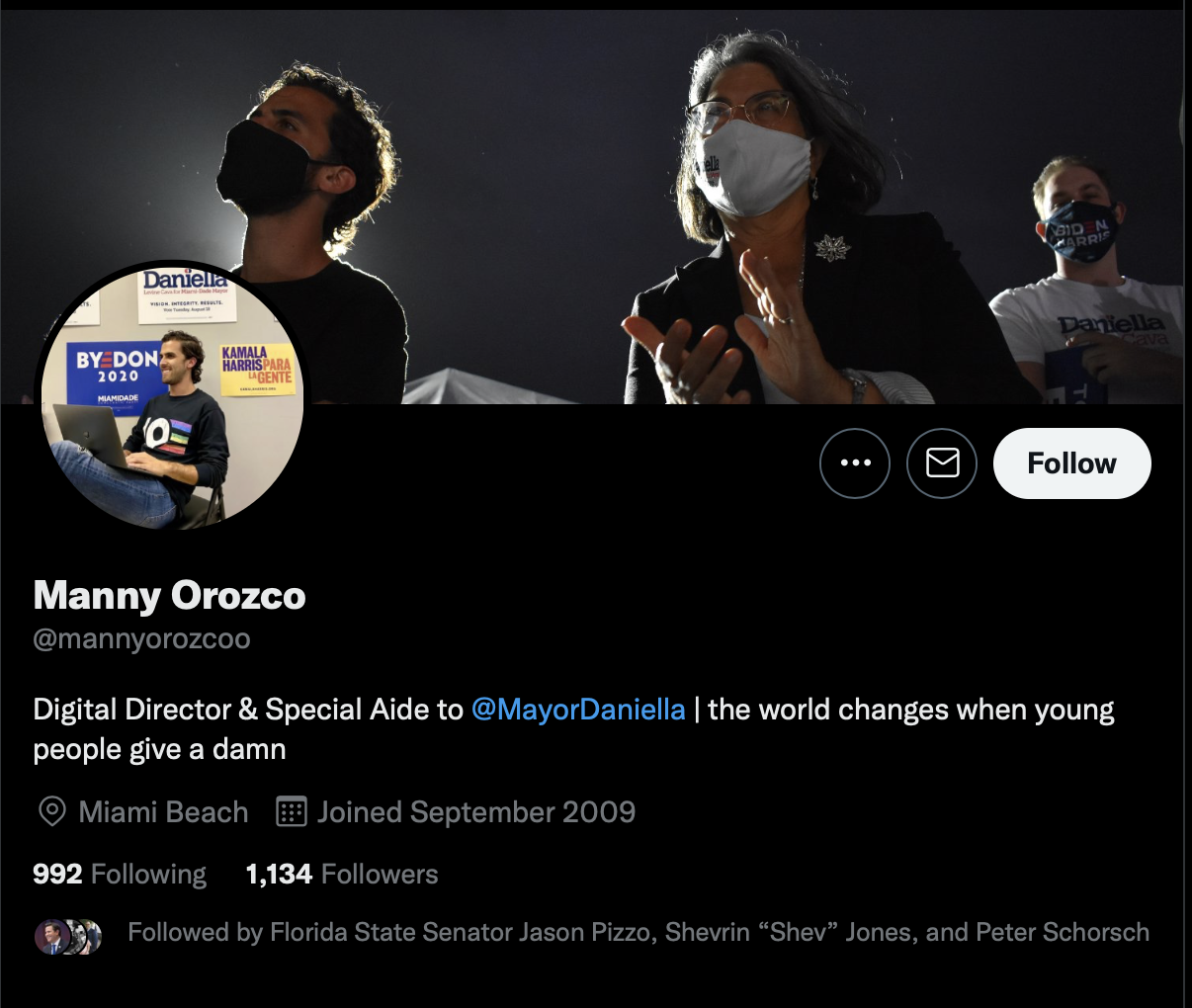 According to tweets on his new Twitter account, @MannyOrozco, he has been involved in leading efforts involving the youth of Miami-Dade County with Mayor Daniella Levine Cava, even including being present at a baby formula giveaway last month. 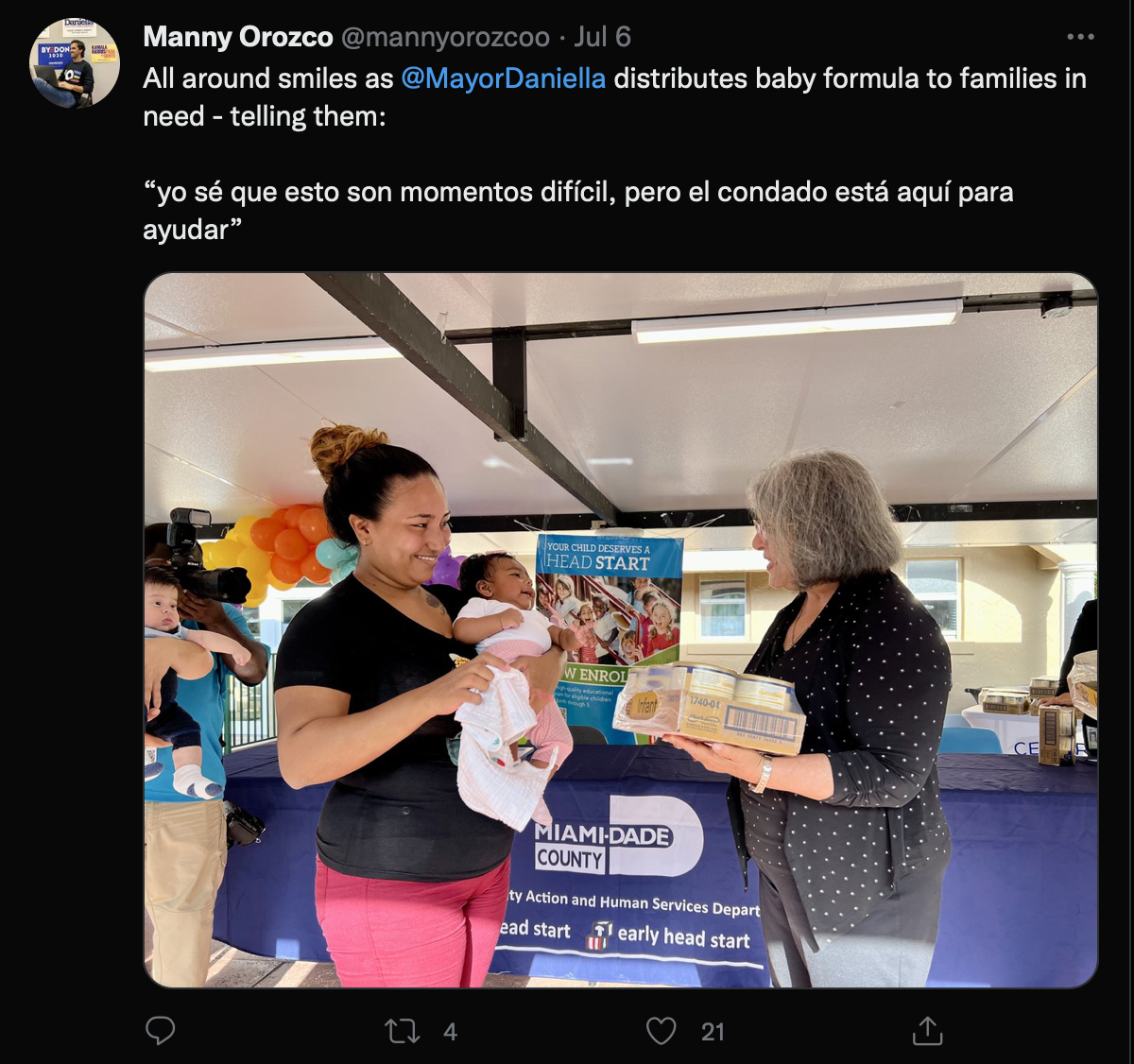 Yes, you read that right, the same person who thinks infants using pacificers is practice for them to perform oral sex on him, is being paid by taxpayers to be around infants and young children, with Mayor Daniella Levine in full support. 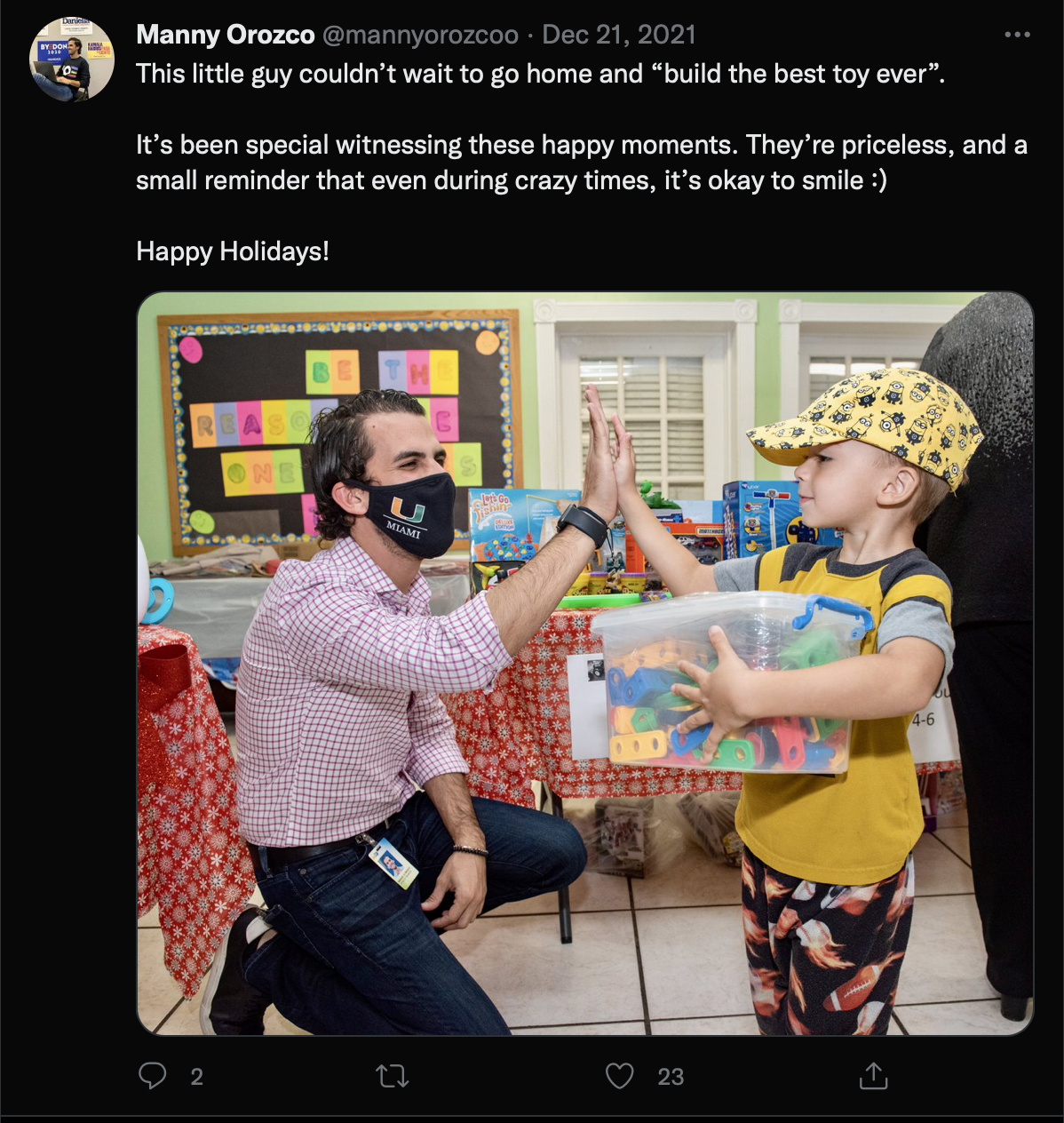 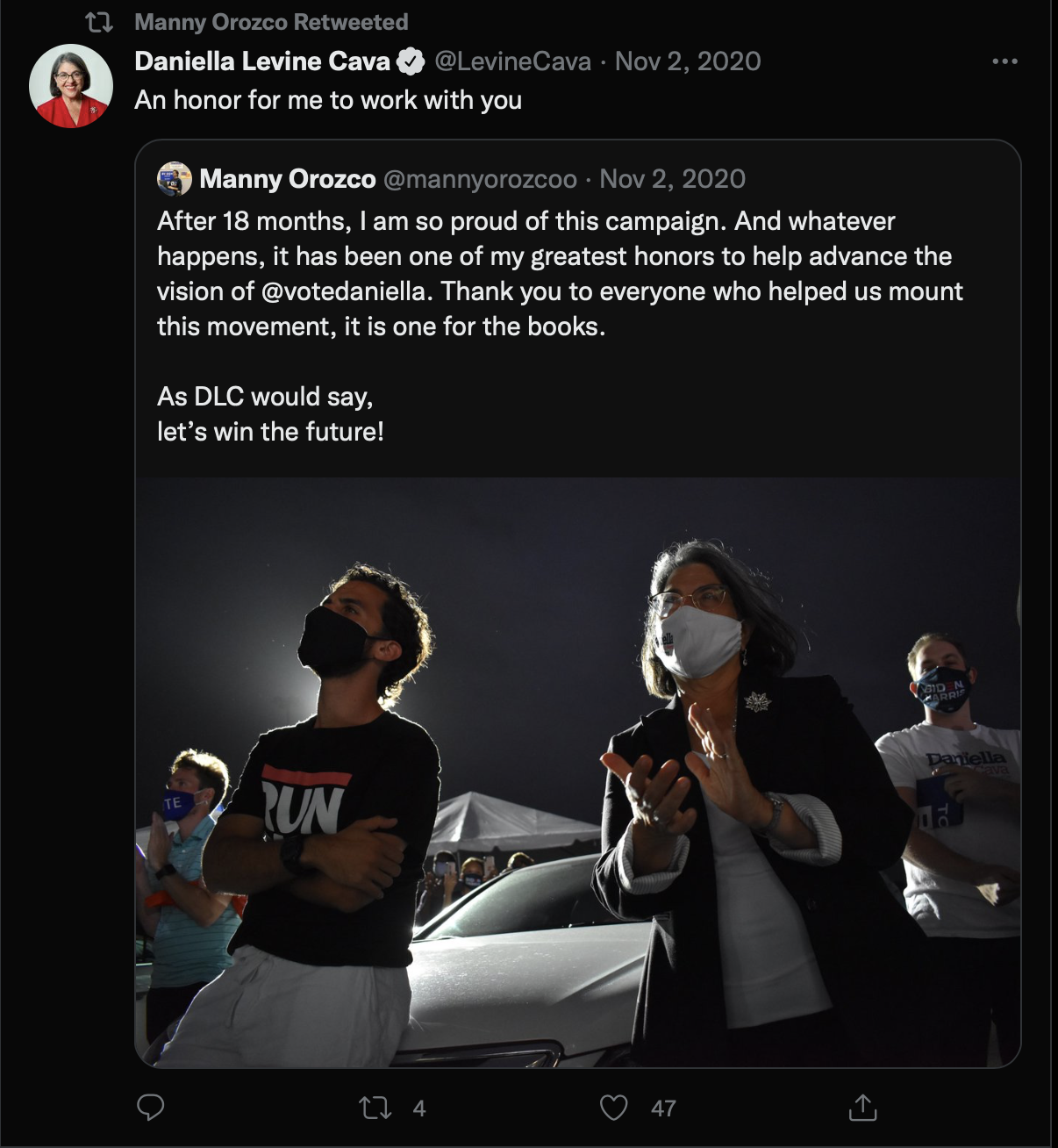 Mayor Daniella Levine Cava has even allowed Orozco Ballestas to travel with her to meet House Speaker Nancy Pelosi, further elevating him to places of power that he has no business being placed in. 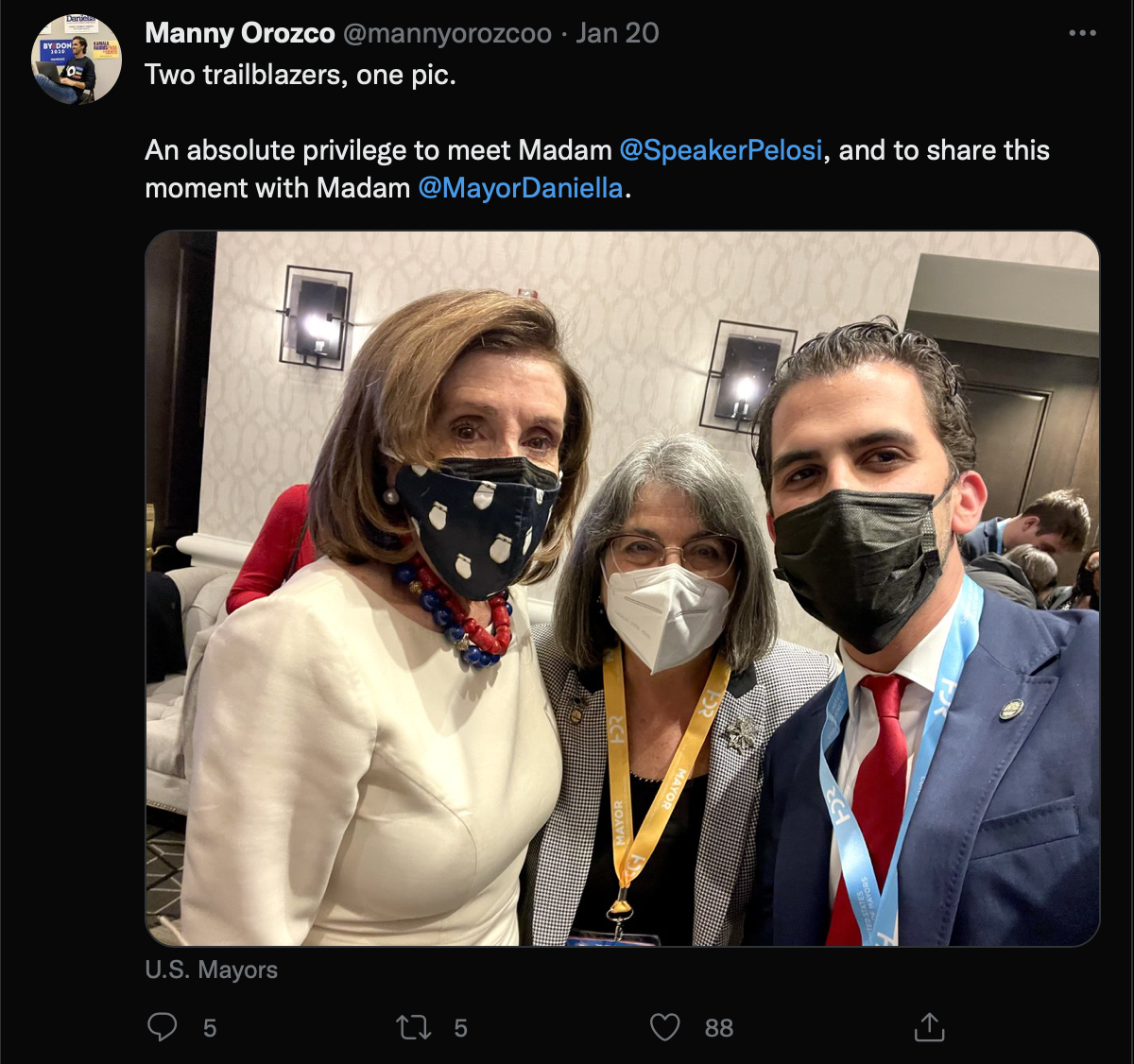 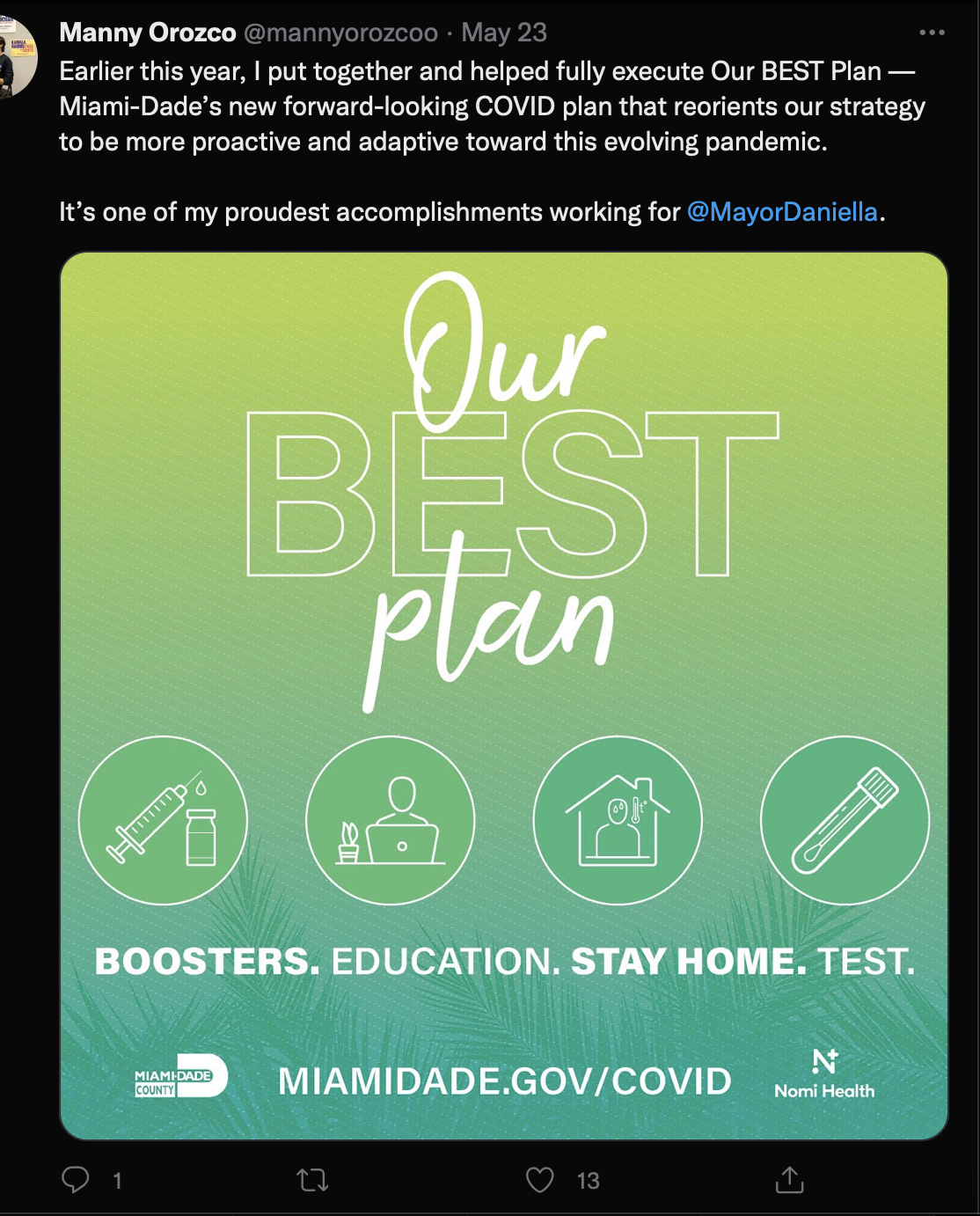 Almost 10 days ago, the Central Florida Post submitted a public records request to Miami-Dade County regarding Orozco Ballestas’ hiring, his current pay grade, and any disciplinary actions or complaints involving the former Gillum staffer. To date, Miami-Dade County has failed to fulfill these requests, despite strict public records laws in Florida requiring them to handle such requests in a timely manner.

Yesterday they finally acknowledged that they were still in the process of getting us these documents, but did not give any feedback on how much longer it would be before the Central Florida Post received them.

Mayor Daniella Levine Cava has a lot to explain when it comes to her affinity of Orozco Ballestas, including why she thinks it is wise to continue to allow him to shape city policy and be involved in youth outreach efforts on behalf of Miami-Dade taxpayers.

This is an ongoing story and we will update you as soon as more information becomes available.