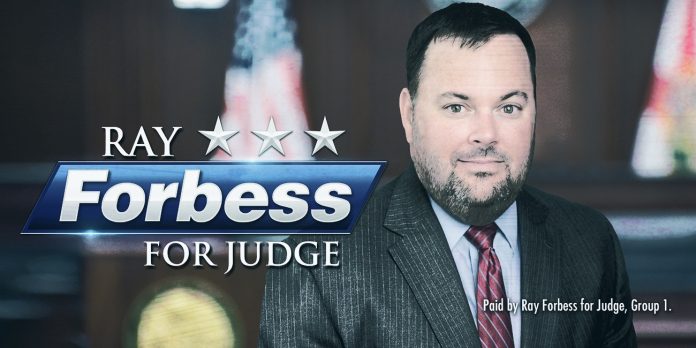 Raymond “Ray” Forbess, a former Clay County Assistant State Attorney who also worked in the local Circuit Court and with the Duval County State’s Attorney’s office, boasted on his law firm website about defending at least 20 child molesters or pedophiles. The website has since been scrubbed of any “case studies” relating to their history of representing those charged with sex crimes.

In a little over a month, voters across Florida will head to the polls to make their voices heard in the August primary elections. While state legislative, congressional, and races for various offices in the executive branch of Florida’s government may gain the most attention, Floridians also have important choices to make in local judicial races.

One such judicial race, Clay County Judge (Group 1), is taking place in the Jacksonville metropolitan area in Northeast Florida. Like most judicial races, you have a mixture of former prosecutors and private practice attorneys vying for the open seat in the county court system.

Raymond “Ray” Forbess is one of those candidates. His campaign website touts his experience on both sides of the courtroom, referencing his time as an Assistant State Attorney, as well as his time as a litigator in private practice at The Forbess law firm, which he runs with his father, Raymond Forbess, Sr.

This is how Forbess describes his work as a criminal defense attorney with his father on his campaign website.

“Child molestation, traveling to meet a minor, possession of child pornography, kidnapping, sexual battery, and transmission of harmful material to a minor.” 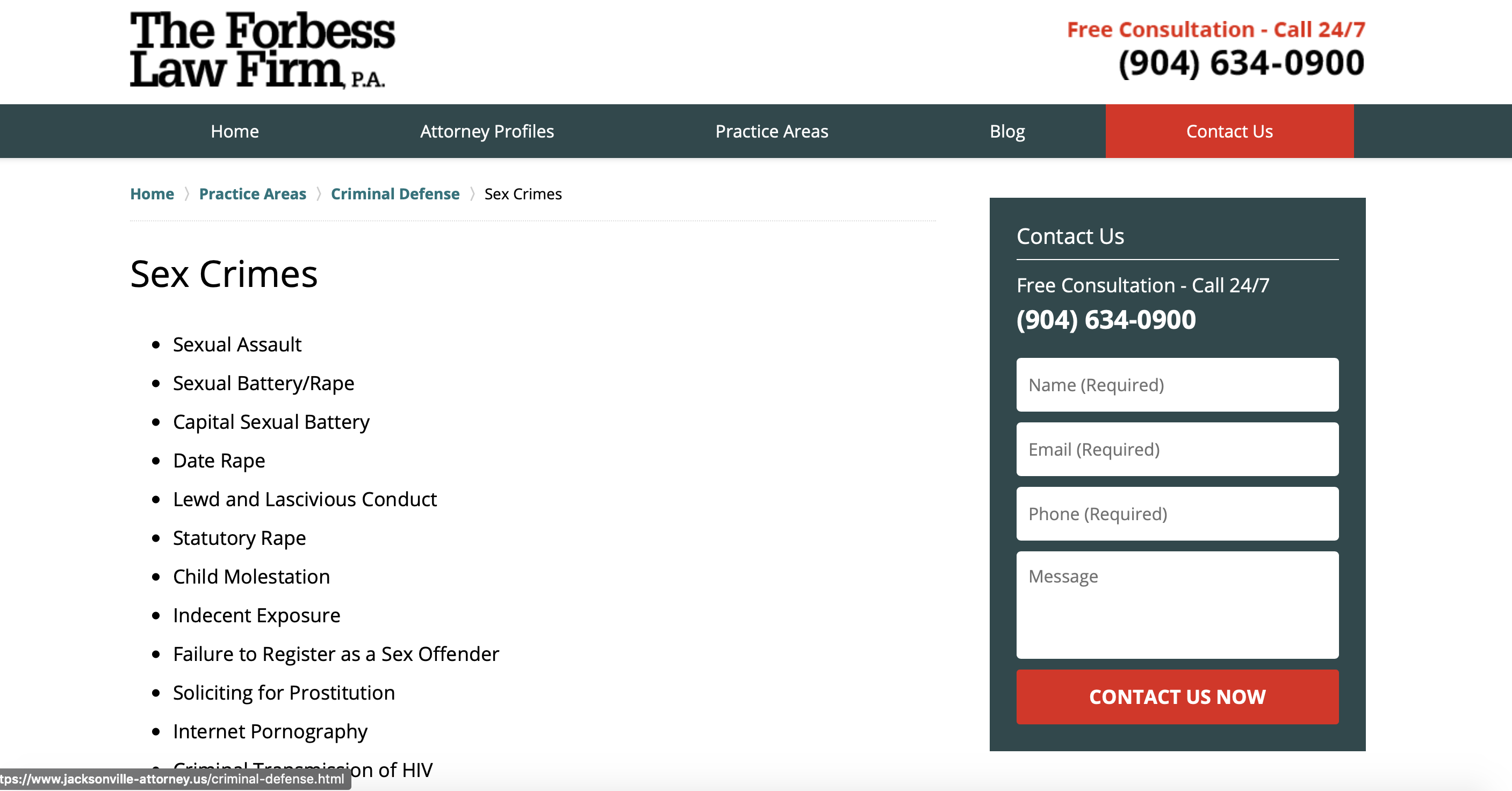 Up until June 22nd of 2022, The Forbess Law Firm website even boasted about at least 20 sex crime cases their attorneys were involved in, but that content has since been mysteriously scrubbed from the website.

The Central Florida Post used the Wayback Machine, an archival tool to recover the sex crimes “successes” from The Forbess Law Firm’s website. On the unredacted version of the firm’s site, they share in graphic detail how they were able to get charges completely dismissed or significanlty reduced for those accused of sex crimes, including some repeat offenders.

One such charge of capital sexual battery by a 60-year old man against a 6-year old girl even includes an omission from their client that he “left his hand on her vagina longer than he should have.”

Our client, C.S., a 60 year-old man, was arrested and held on no bond for Capital Sexual Battery, a Mandatory Life Felony. C.S. was accused of fondling and penetrating the genitals of a six-year old girl. The child said that C.S. stuck his finger in her genitals and “moved it all around”. When interviewed by detectives at the Jacksonville Sheriff’s Office, C.S. said that he left his hand on her vagina longer than he should have. C.S. was facing mandatory life in prison. After the facts of the case were examined and scrutinized by our firm, our Jacksonville Sex Crimes Lawyers were able to get all charges DISMISSED and our client was allowed to resume his normal life.

Another case study detailed how they helped a man get off scott free after he was accused of touching his girlfriend’s 6-year old daughter over 100 times on her legs and her vagina.

Our client, J.S., was arrested in Jacksonville for lewd and lascivious molestation, a first degree felony. The alleged victim, a 10 year-old girl, told her grandmother and the police that she was molested by our client. Our client dated the girl’s mother at one time. She said that the touching incidents occurred 4 years ago, when she was 6 years old. She claimed that he would touch her between her legs on her vagina over 100 times. The alleged victim’s sister told police she saw J.S. touch her sister and was afraid to tell earlier because she was afraid one of her family members would hurt him. Our client’s original bond was set at NONE, but then was set at $250,003 with an ankle monitor. Our Jacksonville Sex Crimes Attorneys investigated the case further and brought out inconsistencies in the testimony and evidence. Our Jacksonville Sex Law Firm was able to get all charges DISMISSED.

Yet another case study on The Forbess Law Firm detailing clients they previously represented for a wide-ranging host of sex crimes described how a 32-year old man was accused of “penetrating” a 12-year old girls vagina and fondling her breasts.

Our client, H.H., was arrested in Jacksonville and charged with 2 counts of lewd or lascivious molestation and 1 count of sexual battery. One lewd charge and the sexual battery charge were both life felonies. That means, if H.H. was convicted of either charge, he would face life in prison. The other lewd charge was a second degree felony, punishable for up to 15 years in prison. The alleged victim was H.H.’s 12 year-old step-daughter. The alleged victim told her mother and police that H.H, a 32 year-old man, kissed her with his tongue, used his hand to fondle her breasts, and digitally (finger) penetrated her vagina. After our Jacksonville Sex Crimes Attorneys investigated the charges thoroughly, we were able to get all sex charges DROPPED.

To be clear, merely being accused of any crime does not denote quilt, however it is incredibly concerning that Mr. Forbess and his father seem to have created a cottage industry or niche in representing people accused of sex-crimes in the Jacksonville, Florida area.

Moreover, as you can see in the wording in some of the case studies that they deleted from their website late last month, they seem to be proud of their work representing those accused of sex crimes and admit to working on such cases “on a daily basis.”

This should be incredibly concerning for Clay County residents. Do they really want someone who has a clear documented history defending those accused of child molestation and other sex crimes sitting on the bench if, God forbid, someone committed such heinous crimes against their children or loved ones?

Additionally, Forbess has loaned his campaign over $50,000 in personal funds according to the most recent finance report, which also begs to question if he is funding his campaign for Clay County Judge with monies earned defending child molestors, rapists, pedophiles and others accused of incredibly serious sex crimes?

As America remains in the dark about convicted pedophile Jeffrey Epstein’s client list and the full extent of his wide-ranging pedophile network, including the role of his madam Ghislaine Maxwell who spent decades procuring underage girls for Epstein and his associates, is it really in the best interest of the citizens of Clay County to elect someone like Raymond Forbess whose law firm has become known as one of the “go to” criminal defense outfit for those accused of sex crimes?

Lastly, if Mr. Forbess is proud of the role he and his law firm have played in providing legal counsel to these sexual predators, why has he erased the sex crimes case studies from his firm’s website and why does he not mention his history of providing criminal defense services to child molesters and pedophiles on his campaign website?

The Central Florida Post attempted to obtain comment from Raymond “Ray” Forbess about his firm’s role in representing child molesters and pedophiles, by phone and text message, but had not received a response at the time of publication.