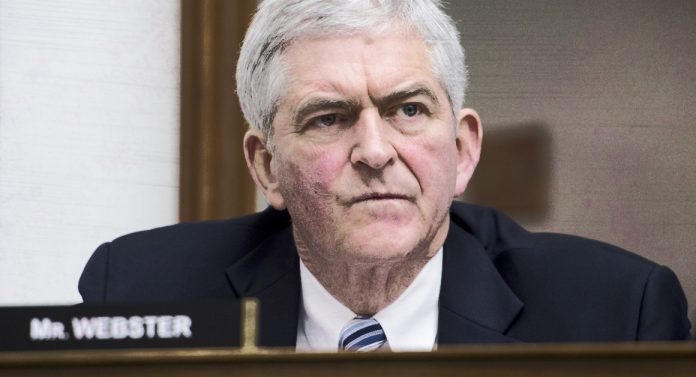 During his time in the state legislature, Webster voted for nearly $250 million in toll road increases, voted in favor of legislation that named a highway after himself, and even supported the idea of leasing our roadways to foreign business interests.

It is no secret that the Central Florida Post has voiced serious concerns over sending career politician Daniel Webster to the United States Congress for another term. Simply put, he has held elected office in the state or federal government since 1980 and represents the Bush era of the Republican Party, which was firmly cast into the dustbin of history with the historic election of Donald J. Trump as President of the United States in 2016.

We have addressed how he has refused to acknowledge on record that the 2020 election was stolen from President Trump, even failing to simply raise his hand in affirmation to that simple fact at a Lincoln Day Dinner for the Lake County GOP late last year, which was headlined by voter fraud and election integrity expert Seth Keshel. When the vote was held on whether or not to create the sham J6 Committee, which has predictably turned into a Soviet-style show trial and witch-hunt, Webster didn’t even show up to cast a vote on the matter.

And just a few weeks ago, we exposed how his campaign consultant and strategic advisor, Kirsten Borman Dougherty, counts pro-impeachment and J6 Committee backing Republicans as her main clients, aside from supporting the re-election efforts of Congressman Daniel Webster in Florida’s 11th congressional district.

Now, we have uncovered the fact that during his time in the state legislature, Dan Webster voted to raise tolls on numerous occasions over the years, to the tune of $250million+ to be specific. He even voted in favor of naming the Western Beltway in Central Florida after himself, which is now called the Daniel Webster Western Beltway.

However, most concerning, is the fact that then Senator Webster supported a 2007 bill from the Florida House of Representatives, which would have allowed the state of Florida to lease the ownership of our highways and toll roads to private entities, including foreign business interests. The bill 7033, included no provisions barring the state of Florida or regional expressway authorities from making private partnership agreements with non-United States corporations or conglomerates.

Two officials familiar with the discussions surrounding the legislation confirmed to the Central Florida Post that Webster was supportive of the idea, even when internal discussions about the bill began to include the fact that Florida would likely have to rely on foreign interests in their effort to privatize the highways and toll roads.

“Senator Webster straddled both sides of the debate over the privatization of roadways in public, but behind closed doors he was very open to the idea. Internal debate centered around which foreign entities would be able to provide the capital necessary to facilitate the privatization. Those discussions included exploring investment from Middle Eastern corporations, something that Senator Webster was not only supportive of, but actively pushed as a potential solution if the legislation passed,” once source explained to the Central Florida Post.

The legislation would end up not coming to fruition, however, it appears that it was a forerunner in terms of the consideration of Middle Eastern interests gaining access to critical infrastructure within the United States.

Seven years later, President Barack Obama negotiated a secret deal, codenamed “Project Pelican”, was started by the Obama administration to allow the former Nuclear scientist for Saddam Hussein to secure a 35 year lease on the container ship sector of Port Canaveral, where the Kennedy Space Center and NASA HQ

A source familiar with the discussions in 2007 between the Florida House and Senate leadership, which included Senate Majority Leader Daniel Webster, said that the Iraqi oil magnate that was awarded the Port Canaveral contract from the Obama administration was on their radar as a potential candidate the state of Florida could lease our roadways to.

Webster’s opponent, Laura Loomer, has been an outspoken critic of radical Islam. and ruing her career as an investigative journalist and activist, Loomer has spent years sounding the alarm of Islamic interest operating within the confines of America.

When contacted about our findings, Loomer gave Central Florida Post the following statement.

“Throughout my opponents 40 years as a career politician in the Sunshine State and DC, he has spent his time deceiving voters into thinking he has their best interest in mind. Whether it is denying the election fraud that occurred in 2020, his chronic absenteeism as the 7th most absent member of congress, his lack of interaction with his constituency, or his willingness to sell out critical Floridian infrastructure to foreign Islamic interests, Daniel Webster has proven that he is AMERICA LAST.

The GOP primary between Webster and Loomer is teeing up to be one of the most watched primaries in the nation. Republican voters are set to make their decision later this summer on August 23rd. Several reports have recently called the elderly congressman’s health into question, including a recent expose in The Floridian.