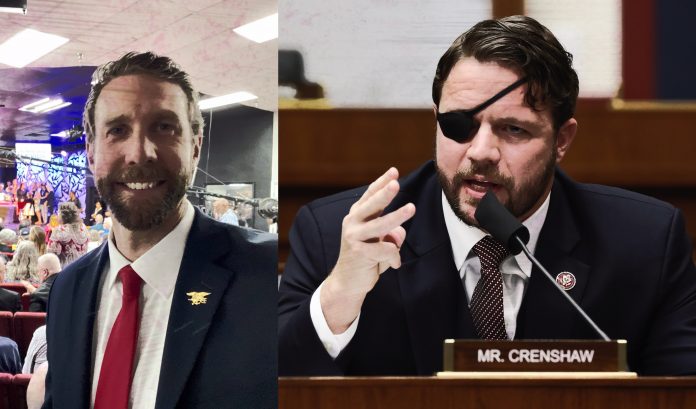 Navy Seal Brady Duke is attempting to claim the MAGA mantle in the GOP primary for Florida’s 7th congressional district, but the donors and endorsements he is attracting represent the corrupt Never Trump wing of the Republican Party.

By all accounts, Navy Seal Brady Duke seems to be a nice guy. He’s got a big family, moonlights as a pastor, and is now running for United States Congress in Central Florida. His service to this nation should be commended and respected. However, when you pull back the curtain on his biggest campaign donors and couple that with Duke touting the endorsement of Never Trumper Congressman Dan “Eyepatch McCain” Crenshaw, it becomes increasingly clear that he his already knee deep in the muck of the DC swamp.

Crenshaw most recently claimed that American mothers worried about the baby formula shortage were “pro-Russia and pro-Putin.” Congressman Crenshaw has long supported endless foreign wars and adopted the political posture of RINO United States Senator John McCain, cementing his status as “Eyepatch McCain” with his vote to send $54bn to Ukraine as Americans suffer staggering economic and public safety woes on the homefront.

Honored to have the support of Congressman Dan Crenshaw. pic.twitter.com/s59pSOyUfA

Over the past couple of weeks, the Central Florida Post has been reviewing Duke’s fundraising reports that are filed with the FEC, which has revealed not only how his campaign is being boosted by some very unsavory people.

Duke, who has not hidden the fact that he once advised casino magnate Steve Wynn on security and surveillance for his Las Vegas operations, launched his campaign with tens of thousands of dollars from Wynn, his wife, and top casino executives. Wynn had to step down from a prestigious fundraising post with the Republican Party after numerous sexual misconduct allegations and is currently being investigated for his ties to Chinese Communist Party leaders and business interests.

To date, Duke remains the clear choice of Sin City billionaires Wynn, despite the fact that Seminole County residents (most who were veterans), had their lives ruined by gambling operators in the Allied Veterans scandal just over a decade ago.

For those that don’t remember, Allied Veterans operated a $300million dollar gambling and lottery scheme, which led to federal prosecutors indicting close to 60 people for money laundering and racketeering.

But casino operators who have always had an eye on turning the state of Florida into “Sin City 2.0”, aren’t the only ones betting big on Brady Duke’s campaign for United States Congress.

Longwood, Florida based developer Richard Kahn cut a $2,900 check to Duke’s campaign towards the end of March. In 2013, Kahn was charged and pleaded guilty to bribery and corruption charges stemming from a shady land deal he attempted to secure with South Carolina State University through a series of bribes and illegal kickback with school officials.

Kahn has also donated to Congressman Dan Crenshaw and former Republican Congressman Carlos Curbelo, who bragged about being the first Republican to publicly support the first sham impeachment of President Donald J. Trump and was a founding member of the globalist Climate Change Caucus.

Duke has also taken over $10,000 from South Carolina couple David and Judy Trew, who have been big fundraisers for people like Lindsey Graham and fellow RINO Congresswoman Nancy Mace.

While the people who donate to political candidates do not define the nature of a candidate in the most absolute terms, it certainly shows voters how the political donor class views a particular candidate and demonstrates how the candidate aligns with their interests.

The same goes for the endorsements being touted by Duke, the most high-profile and problematic being the endorsement of Duke’s campaign by Texas Congressman Dan Crenshaw.

At a certain point, the common denominator becomes quite clear. People who prefer RINO, Never Trump, moderate Republicans have been flocking to either donate or endorse Duke’s campaign, all while Duke is telling voters that he is firmly America First and standing in the breach for President Donald J. Trump’s legacy.

Following the Crenshaw endorsement, Duke was roasted on his social media accounts, as he should have been for acting like he was just endorsed by a leading America First member of congress like Jim Jordan.

But it’s clear that he has been bought and paid for by establishment forces trying to stomp out the very America First platform he claims to champion.