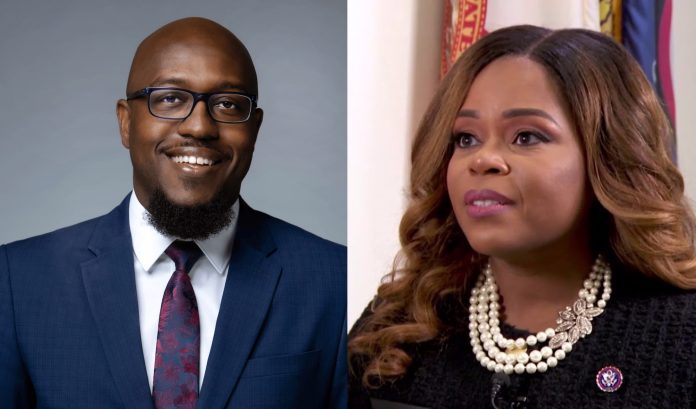 Dr. Drew Montez Clark is one of over 80 Black Republicans running for congress in 2022, which is a record setting amount according to the Washington Post and could help reshape the Congressional Black Caucus, moving it away from becoming a Democrat only (and far left) political apparatus in the United States Congress.

The Central Florida Post sat down with Drew Montez Clark, who is mounting a bold campaign to take down one of the newest members of The Squad a few weeks ago.

Clark is hoping to take on incumbent Congresswoman Sheila Cherfilus-McCormick, who ran unsuccessfully against longtime incumbent South Florida Congressman Alcee Hastings before ultimately winning a special election to fill the vacancy in Florida’s 20th congressional district late last year. She was supported by the AOC linked Brand New Congress organization, which has pushed to defund the police, social and racial justice legislation that is rooted in race baiting ideals that pit people of color against White Americans, and of course the insanely costly Green New Deal.

Cherfilus-McCormick also campaigned on the socialist policy of Universal Basic Income and Medicare for All, which would not only worsen the effects of inflation that Americans are currently facing, but increase the federal deficit by trillions and the annual federal tax burden on tens of thousands of small business owners and tens of millions more middle class Americans.

Given the consistent increase in voter turnout of Black Americans casting their ballot for Republican candidates since President Trump’s historic 2016 campaign and 2020 re-election bid, Democrat heavy Black congressional districts like the one Cherfilus-McCormick represents are becoming increasingly more competitive for Black Republicans who decided to throw their hat in the ring and run for elected office.

With the Biden administration being more concerned about sending $40billion to Ukraine, shutting down our baby formula production facilities, refusing to hold Democrat elected officials in predominantly majority minority for the systemic gang violence, and failing to address the rising food and gasoline prices, recent polling has shown that people like Cherfilus-McCormick might be at the most risk electorally that they have even been in modern American politics.

Dr. Drew Montez Clark’s parents, who were both educators during his upbringing, encouraged Montez Clark to be a free-thinker and use critical thought, which he says led him to becoming a Republican and later in his life adhering to the core America First principles advocated for by President Donald J. Trump and the MAGA movement. Before earning his Doctorate in Chiropractic Medicine from Life University in Georgia, Montez Clark earned a coveted walk on spot with the Virginia Tech college football team.

After graduating and earning his Chiropractic degree, he spent two-years abroad in Italy researching alternative medicine treatments to neurodegenerative diseases like Multiple Sclerosis and Parkinson’s, which Montez-Clark told The Central Florida Post helped him understand the hold that Big Pharma has on treating illness the lack of research being conducted on treatment paths that do not employ harsh chemicals and often addictive drugs.

Along with his wife, he runs two chiropractic facilities in South Florida, which is what prompted him to run for Florida House several years ago and for United States Congress in 2022.

“We really saw under President Trump how having someone with an understanding of business and desire to invest in growing small businesses like ours was crucial to us being able to provide for our patients and employees. Unfortunately, in Joe Biden’s America, people like Biden and House Speaker Nancy Pelosi are far more concerned about starting endless foreign wars in faraway places,” Montez Clark told this journalist.

He co-founded MAGA The Movement, which works to improve voter registration and activism efforts in areas where Republicans have historically ignored. He also serves as the Minority Outreach Director for The America Project, a 501c4 nonprofit founded by Overstock.com Founder Patrick Byrne and General Flynn. TAP is currently running several initatives working to uncover issues of election integrity and voter fraud in the 2020 elections.

“Sheila Cherfilus-McCormick is a rubber stamp for Nancy Pelosi’s agenda and her failed leadership. Americans are suffering because of Democrat control in Washington. High crime, high gas-prices, out-of-control inflation, and attacks on our constitutionally protected freedoms are hurting American families on a daily basis. We need real leadership that works on improving the lives of the American people, something I understand quite well.

I will fight to improve the lives of Americans. Special interests and establishment political power brokers will not dictate how I vote, which can’t be said of Congresswoman Cherfilus-McCormick.”

To learn more about Dr. Montez Clark’s campaign, you can click here.