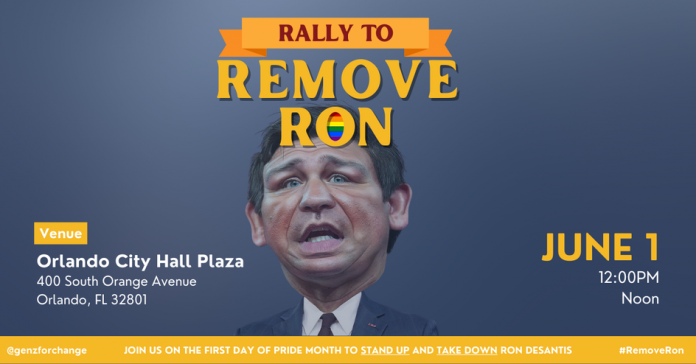 Billed as the “Rally to Remove Ron”, hundreds of looney left-wing political activists will protest outside of Orlando City Hall on Wednesday June 1st, a day before Florida Governor Ron DeSantis is set to be in Orlando with David Rubin at The Plaza. They will also protest on Thursday evening outside of The Plaza according to social media posts.

A collection of far-left activists that have been vocal about abolishing the 2nd Amendment and allowing educators to manipulate young children with depraved sexual discussions or content, will descend on Downtown Orlando this Wednesday to hold a “Rally to Remove Ron”, protest outside of Orlando City Hall at 12pm.

This is the same group of people who nearly evaporated with rage after Governor Ron DeSantis signed the Parental Rights in Education Act, which they have falsely coined the “Don’t Say Gay” bill.

On June 2nd, Ron DeSantis will be hosting an event to undoubtedly spew more hatred and bigotry.

That’s why on June 1st, we’ll be rallying in the SAME city to show him that come November we will vote him out!

However, the legislation prevents teachers and public school employees from engaging in discussions about sexual orientation and gener idenity with students in kindergarten through third grade. It also prevents other attempts at indoctrination of minors, like lessons plans or discussions about Critical Race Theory, which “woke” educators have used to label students as “oppressors” and the “oppressed”.

Anyone with the slighest moral or ethical compass, gay or not, understands that public school employees should be focused on the basics of educating our children and not involved in sexualizing children behind their parent’s backs.

Late last year, we exposed the fact that the Orange County Public Schools was providing the filthy pornography book Gender Queer to students without parental approval. This journalist discussed the dangers of doing so during public comment at an OCPS Board Meeting, which resulted in being forcefully removed from the chambers, for “violating decorum” and using “obscene language.”

This quickly went viral as Floridians, and people around the world, realized the hypocrisy of not being allowed to read aloud passages from a book during a public meeting with only adults in the room, while several schools in Orange County allowed young children to check out the book without parental permission.

Now, local far-left groups which have refused to denounce the domestic terrorist activity of Black Lives Matter and Antifa, will spend the rest of the week moving their online tempertrantrums about Governor Ron DeSantis into real life. 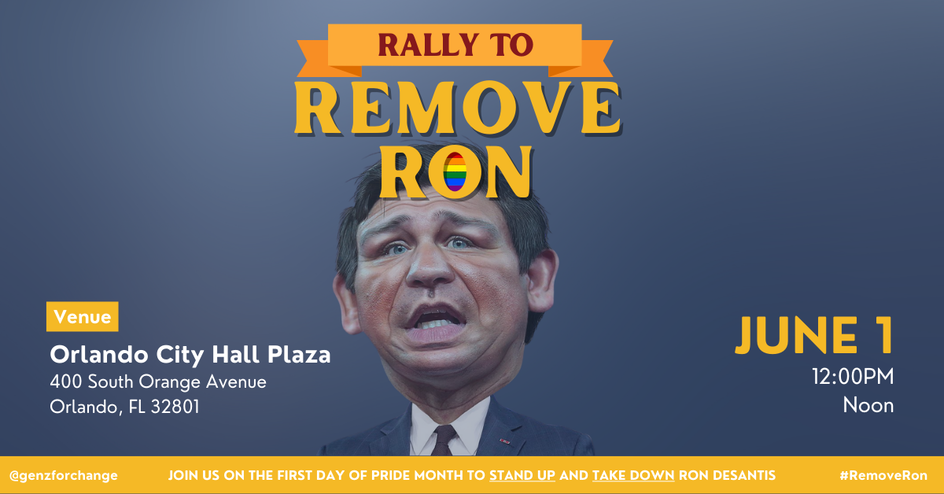 Join Jack Petocz and other powerful activists, politicians, and professionals to call for the removal of Ron DeSantis from office this November. Make your voice heard in the wake of LGBTQ+ discrimination, disenfranchisement of POC, mass shootings, and reckless COVID policy.

Since the rally was announced just before the Memorial Day holiday weekend, it’s highly unlikely the group had already obtained permitting from the City of Orlando to operate on city property, however it would not be unlikely for progressive Orlando Mayor Buddy Dyer to fast track the permitting process.

Alicia Farrant, a candidate for Orange County School Board in District 3, told the Central Florida Post that now is not the time to point fingers, but rather time for educators to focus solely on the education of Florida’s schoolchildren.

“As our nation is facing intolerable pain, we cannot allow tragedy to divide us even more.  Now is the time to set aside our political differences and come together in unity to ensure that safety is a top priority in our schools. We must focus on providing a healthy environment where all of our students and staff can focus on learning and education.

Now is not a time to point fingers but to see how we can come together in order to implement a multifaceted plan that would ensure every child, teacher and parent feels protected within the Orange County Public School system. One thing I know for certain is that we as Americans know how to rise up and become stronger in the face of evil. Hope always prevails,” Farrant told the Central Florida post.

Randy Ross, another candidate for office in the Orlando area, questioned why people would be rallying to vote out DeSantis, who he said is the best Governor in America. Ross, who is openly gay, served as the Orange County Chairman for Trump during the 2016 election cycle.

“A rally to encourage voting out the best Governor in the country?  Don’t these people have anything better to do?

I continue to remain surprisingly shocked at how the Left, specifically the LGBTQ community, highjacks any and all to fit their narratives. Governor Ron DeSantis signing the Parental Rights Bill into law was a victory for all Floridian parents who can and should have input on what and when their children will be taught sexual orientation and such. We’re lucky to have a Governor who fights for what’s right using common sense as well as intellect,” said Ross, who is a candidate for Florida House of Representatives in the 39th District.

The Central Florida Post will be there to cover the 12pm protest outside of Orlando City Hall on Wednesday and to document the protest outside of The Plaza at 630PM ahead of Governor Ron DeSantis’ appearance with journalist Dave Rubin.

For those looking to exercise their 1st Amendment rights in response to these far-left protests organized by out-of-town political groups, see the below flyer for more information on when and where to show up.

I’m sick of our babies not coming home from school bc our politicians on both sides refuse to enact gun reform. Join us as we rally for humanity. https://t.co/FAj5DGFmC6