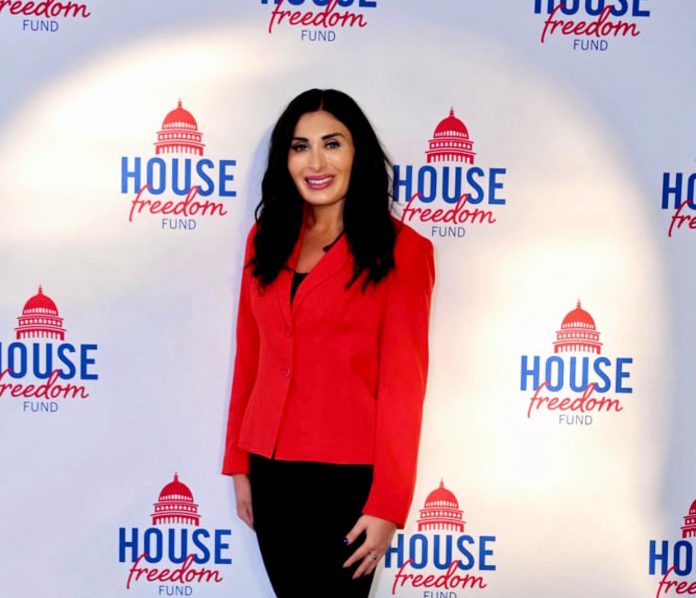 The investigative journalist turned congressional candidate has spent years exposing corruption in politics and Big Tech. Sending her to congress will certainly upset the established order in Washington DC, but isn’t that the point?

Laura Loomer is quite literally the MOST BANNED WOMAN in the world. Her dedication to exposing corruption across America has made her the #1 trending topic on Twitter more times than we can remember, even after the platform suspended her account.

For years, she has taken her in-your face brand of journalism from coast to coast, uncovering the misdeeds of politicians, elected officials and Big Tech platforms alike. As a congressional candidate going into the 2022 midterm elections that will determine if Republicans can regain the House and hold the Senate, Loomer’s campaign has garnered an incredible amount of attention for someone challenging an established career politician like Dan Webster, who has held elected office since 1980.

So, for those who are wondering why Laura Loomer should earn their vote in Florida’s 11th congressional district, we have put together our TOP 10 reasons on why voters should love Laura Loomer!

1). SHE’S ALWAYS BEEN EXACTLY WHO SHE CURRENTLY IS –> Whether it was during her college years at Barry University in Miami, Loomer has always had an interest in fighting for the truth. In 2015, while at Barry, Loomer infamously documented school officials giving their stamp of approval for her to start “Sympathetic Students in Support of the Islamic State of Iraq & Syria”. School employees would later suggest she tone done the name of the group, but had no issue in private conversations about Loomer forming a campus group to raise money for a terrorist organization. This caught the attention of James O’Keefe and Project Veritas, who ultimately released the video. Loomer was suspended and barred from her graduation ceremony, despite being an honors student. Nevertheless, the mission of exposing radicalism on college campuses was more important to her and that’s courage.

2). CONTINUES HER WORK FOR PROJECT VERITAS –> Project Veritas is a household name nowadays in the America First movement. However, some of their earliest smash hits were thanks to Laura Loomer. She spent years working with James O’Keefe at PV. Seeking to highlight the lack of security when it comes to the voting process in NYC, Loomer donned a full burqa and actually received the ballot of Hillary Clinton advisor Huma Abedin on election day in 2016.

3). LOOMER STORMS STAGE PLAY DEPICTING ASSASINATION OF PRESIDENT TRUMP –> Loomer and several others stormed the stage of a sick performance of Julius Caesar in NYC, which included actors playing out the assassination of someone pretending to be President Donald Trump. As becomes common with Loomer, she demonstrates in doing this that she knows how to draw attention to issues in ways that have a maximum impact. Her storming of the stage quickly went viral and spurred a nationwide discussion on the absolute insanity of the far-left who not only pretended killing President Trump in stage plays, but regularly flat out stated their desire to see him and his family murdered.

4). SHE HELPED SAVE FLORIDA FROM A GOVERNOR ANDREW GILLUM –> All throughout the general election matchup between then Congressman Ron DeSantis and former Tallahassee Mayor Andrew Gillum, Laura Loomer was barnstorming the state with myself and several other journalists working to expose the true socialist / marxist intent of Gillum’s campaign. I was violently attacked by a rabid mob of Gillum supporters in Tampa, both of us booted from a synagogue in South Florida. As soon as the recount was announced, Laura and I were the first on the ground in Broward and Palm Beach to keep an eye on Democrat Supervisors of Elections who were literally manufacturing or “finding” ballots. Unsealed ballot boxes were found in rental cars returned to the airport, hidden away in public schools, or arriving at the Supervisor of Elections office in Broward County in boxcar trucks with security seals broken. Wherever the leads took us, Loomer led the way. Big League Politics credited Loomer as part of a group of “troublemakers” who took down Andrew Gillum. After recent his gay meth orgy, we all owe her another THANK YOU!

5). CRASHED PELOSI’S HOUSE, THE WOMEN’S MARCH, GAVIN NEWSOM’S MANSION IN A SPAN OF WEEKS –> Loomer was BUSY in the final two weeks of January in 2019. First she crashed Nancy Pelosi’s ritzy Napa Valley estate with undocumented works, climbing over the properties wall (yet Nancy opposed securing our Southern Border and claimed “walls don’t work, are racist). Then she jumped on stage at the Women’s March in Washington DC, calling out the group for their ties to rabid anti-Semites. And then she climbed over the walls of the Governor’s Mansion in California to protest Gavin Newsom’s dangerous immigration policies with several other activists, clad in serapes and sombreros.

6). BANNED ON EVERY PLATFORM, DEBANKED, DEHUMANIZED… BUT DOESN’T STOP FIGHTING FOR THE AMERICA FIRST AGENDA –> Banned on Uber. Banned on Lyft. Banned on Facebook. Banned on Twitter. Banned on Instagram. Debanked by several financial institutions. Even after being under constant attack and the victim of an international campaign to silence her, Loomer has not slowed down one bit. She has not given up. In fact, she’s filed lawsuits against Big Tech and continued to speak out on behalf of other deplatformed individuals. She has not let the mainstream media smears and lies demoralize her. Most importantly, she has not responded to her deplatforming by shutting up or toeing whatever the latest neo-Marxist line of bullcrap the globalists are shoving down our throats.

7). MADE A VALIANT EFFORT IN 2020 AGAINST A LONGTIME DEMOCRAT INCUMBENT IN SOUTH FLORIDA, DID THE BEST ANY REPUBLICAN HAS EVER DONE IN THAT DISTRICT –> With the endorsement, support and vote of President Trump, Loomer ran an upstart campaign in Florida’s 21st congressional district against longtime incumbent Lois Frankel in 2020. She broke fundraising records and was the first deplatformed person to run for federal office. Despite coming up short on election day, Loomer performed better than any Republican ever has in FL-21. Plus we all know about the widespread fraud that happened in 2020, so she likely did even better than recorded.

8). LOOMER FELL IN LOVE WITH CENTRAL FLORIDA, SAW A CHANCE TO DEFEAT DO-NOTHING DAN WEBSTER, A RINO REPUBLICAN WHO HAS HELD ELECTED OFFICE SINCE 1980 –> After being invited to speak at some of the largest pro-Trump activist groups in Central Florida, Loomer has said that she comed to love people and atmosphere in FL-11. She also realized something important… Dan Webster is in a solidly safe GOP district, one where he should have no reason to not be the biggest champion for President Trump and the America First movement. And she makes a great point, how many real fighters do we have out of the nearly 100 solidly safe GOP districts? A handful at that. Unfortunately for the citizens in Florida’s 11th congressional district, career politician “Do-Nothing” Dan Webster is a feckless wimp who does not have the courage or energy to fight.

9). SHE HAS OUTRAISED AND OUTWORKED HER INCUMBENT CAREER POLITICIAN OPPONENT –> Loomer has continued to outraise Congressman Dan Webster, who should be burying her in the fundraising department given his years of allegiance to a litany of special interests and corporate conglomerates. However, he is not. Loomer has held dozens of events in the district, almost always to standing room only crowds. At the same time as she is outworking Webster on the ground, she is garnering donations from patriots across the nation and in Central Florida who want a true fighter to represent them in congress.

10). HER PAST PERSEVERANCE PROVES SHE CAN HANDLE THE PRESSURES OF ELECTED OFFICE AND DEFEAT THE SWAMP –>  They say to understand how someone will behave or act in the future, look to their past for guidance. With Laura Loomer, it’s CRYSTAL CLEAR. She has been a fighter since day one and has not let the pressures of cancel culture or slanderous attacks from the media slow her down. We have no reason to believe that sending her to the swamp will be any different, just a lot less corruption and a lot more meaningful legislative action!

As always, we encourage you to look at the candidates for elected office in your own time to make sure you are backing someone who aligns with your personal beliefs! Of course, we are big proponents of the America First movement and that is what impresses the Central Florida Post so much when it comes to Laura Loomer.

You can learn more about her campaign by clicking here.