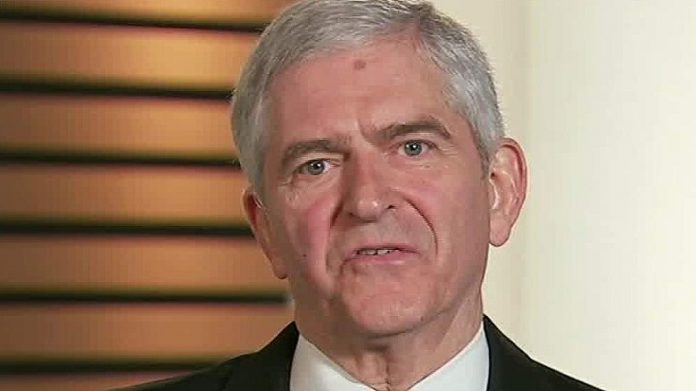 Congressman Daniel Webster’s challenger makes her case to GOP primary voters on why they should select her over the aging career politician.

As our nation quickly approaches one full year of the Joe Biden-Kamala Harris
administration, Americans watched this last week as the communist fake news media continued to glorify the protests that took place on January 6th , 2021 as an “assault on democracy”.

Over the past year, more than 700 Americans in 45 states have been charged in what has been described by the Biden Regime as the biggest criminal investigation in history. Thousands of Americans who showed up to Washington DC on January 6th to protest the fraudulent 2020 elections have been targeted by the FBI, harassed by the weaponized Department of Justice, and many of the nearly 700 who were arrested are being held in jails across the country in appalling conditions.

Here in America, the year is now 2022, and while we are not exactly a third world country…yet, we can honestly say that much like what happens in actual third world nations and failed states, the American government is politically persecuting Americans, undermining the sanctity and integrity of our vote, and we now have political prisoners in what is supposed to be the “land of the free”.

And as we look back on the last year, knowing that hundreds of our fellow
citizens have been waiting for justice in solitary confinement and denied their right to due process, there has been little to no outrage from the GOP establishment over the false portrayal of events on January 6th, and the abuse of power being exercised by Biden’s DOJ against President Donald Trump and his supporters.

As a 2022 AMERICA FIRST, Republican Congressional candidate in Florida’s 11 th District, I am deeply troubled by these harrowing times, especially when I revisit the inaction and cowardice of my RINO, Do-Nothing opponent, Congressman Daniel Webster, who did not vote in the House of Representatives when an act for the creation of an independent commission regarding January 6th was brought to the floor of the House for a vote.

Many people have asked me why I decided to primary Congressman Daniel Webster. And while there are many reasons why Daniel Webster is no longer fit to serve in Congress, his lack of leadership and disregard for the truth following the fraudulent 2020 elections and January 6 th protests is perhaps one of the most concerning and powerful reasons of all. By failing to show up to vote against Nancy Pelosi’s highly politicized January 6th commission, Daniel Webster committed dereliction of duty, he betrayed his fellow

Americans, and he displayed an astonishing lack of conviction when he refused to take a stand on the events that took place on January 6th. In 2021, Daniel Webster missed over 15% of the votes in Congress. It’s a rare occasion when Webster does decide to show up for work, yet he managed to be present in the Capitol on January 6th, 2021. So, of course, he had to milk the events of the day, and he tweeted in agreement with another member of Congress that Capitol Hill Police “saved his life” on January 6th 2021.

I can’t help but chuckle at Congressman Webster’s hyperbolic reaction to Americans demanding accountability at the United States Capitol. What exactly did Capitol police “save his life” from on January 6th? What “attacks on law enforcement doing their job” is Congressman Webster referring to? 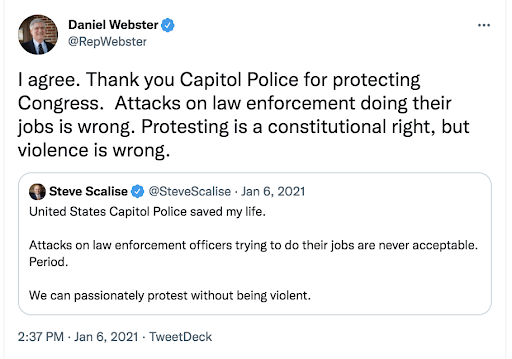 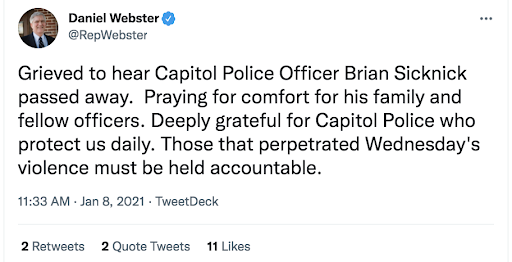 Is he referring to the un-armed American citizens from all 50 states who showed up to demand accountability for the improper handling of the 2020 elections? And why is Congressman Webster perpetuating the false narrative surrounding the death of Capitol Police Officer Brian Sicknick? Dan Webster’s tweet insinuated that “violence” at the Capitol and physical “attacks on law enforcement” was the cause of Officer Sicknick’s death, but a report from the medical examiner’s office ruled violent injuries out, and instead, said Officer Sicknick died from “natural causes”.

The autopsy found no evidence of internal or external injuries. Despite this fact, Congressman Webster still has not apologized for perpetuating false narratives surrounding January 6th!

You see, if Congressman Webster would have actually done his job and showed up to vote when the January 6 th Commission was created, he could have taken the opportunity to address the concerns of his constituents and call for an investigation into what he perceives as “violence”, and he could have pressed Pelosi and his Congressional colleagues who now makeup the January 6th Commission as to what extent the FBI and undercover operatives were involved in the planning of the breaching of the United States Capitol as part of an organized false flag operation to create mass condemnation of President Donald Trump and his supporters, and to justify the deplatforming by Big Tech social media companies of a sitting United States President and millions of his supporters over false claims of an “insurrection”.

But, clearly, Congressman Webster didn’t think these issues were important enough to address, because he skipped the vote and refused to use a proxy vote, which would have ensured that his constituents were properly represented during the votes concerning the Second Impeachment of President Trump, and the creation of the hyper-partisan January 6th Commission.

Perhaps Congressman Webster needs to revisit the First Amendment of the United States Constitution, which states…

“Congress shall make no law respecting an establishment of religion, or prohibiting the free exercise thereof; or abridging the freedom of speech, or of the press; or the right of the people peaceably to assemble, and to petition the Government for a redress of grievances.”

Without a doubt, the widespread fraud in the 2020 elections and the silencing of a United States President by social media companies that worked hand in hand with the Democrat Party machine to undermine the 2020 elections are major grievances that the people of the United States of America would like their member of Congress to address. This is difficult for Congressman Webster to comprehend, clearly, given that he has publicly signaled that he does not believe the 2020 elections were rigged or stolen.

As a member of Congress who represents one of the most Republican Districts in the state of Florida, Congressman Webster’s views regarding the 2020 elections are in direct opposition to the views of majority of the people he was elected to represent. According to a poll conducted by Monmouth University, roughly one-third of Americans believe that President Biden’s 2020 electoral “victory” was the result of widespread voter fraud.

When the people lose faith in the integrity of their elections, this is the very definition of a Constitutional crisis! And my question is, where is the GOP leadership, and where is Congressman Dan Webster to address the astonishing erosion of trust that Americans, and especially Republican voters now have in our electoral process here in the United States of America?

In the days after January 6th, what did Dan Webster do to address these concerns?

Daniel Webster is a failed, career politician who had loudly signaled that he is not up for the fight that is necessary and required from our representatives in these distressing times we are living through to take back our country from the tight, clenched fist of communism that is rapidly crushing our country.

Daniel Webster has had a chance to serve the voters interests for over 10 years as a member of the United States Congress in a majority red, Republican district, and he has neglected his duty to show up and fight. Do-Nothing Dan’s record is clear, and he has earned his nickname through his inaction and dereliction of duty, which is why I am asking you to send a real AMERICA FIRST FIGHTER and Constitutional Conservative to Congress and join me in my efforts on the campaign trail to unseat Congressman Daniel Webster in the Florida Republican Primary on August 23, 2022.

I look forward to meeting all of you on the campaign trail, hearing your concerns, and answering your questions. And I look forward to earning your vote and serving you as your next Congresswoman in Florida’s 11th District.

Laura Loomer, 28, is a Jewish Conservative investigative journalist and activist. Originally from Tucson, Arizona, Laura began her journalism career working as an undercover journalist for Project Veritas from 2015-2017. Loomer’s investigations have uncovered fraud and corruption within the Hillary Clinton campaign, Islamic extremism on college campuses, the Las Vegas Shooting, flaws and loopholes within the U.S. immigration system, and widespread voter fraud throughout the U.S.

Loomer, who is and always has been a loyal supporter of President Donald J Trump, has continued to fight for free speech and First Amendment rights for all Americans.

Loomer is running for Congress in Florida’s 11th Congressional District. She looks forward to representing her constituents in Congress.