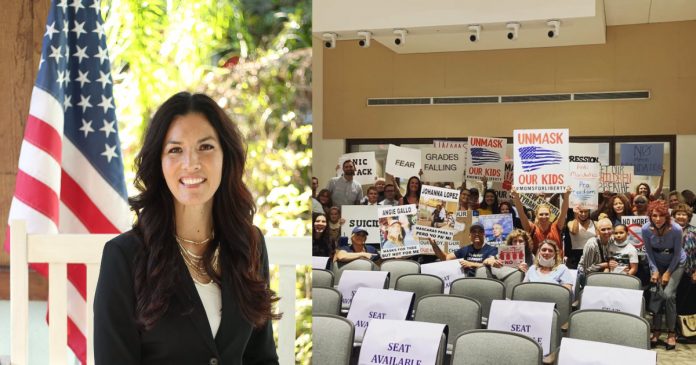 Alicia Farrant, who is a member of Moms for Liberty and FL Freedom Keepers, has been spending the past year attending Orange County Public School Board meetings to advocate for medical choice, parental rights and restoring morality & standards.

After dozens of OCPS school board meetings and rallies, Central Florida parent Alicia Farrant is going from parental rights activist to an officially filed candidate for the Orange County School Board in District 3, which covers South Orlando and is currently represented by Linda Kobert, who is not seeking another term.

Farrant and her husband Jonathan run Impact Nations, a Christian non-profit that has focused on communities in need in both Guatemala and El Salvador since 2012, where she serves as its Vice President. The non-profit’s projects include everything from building volcano homes, to starting the No Greater Love Orphanage in El Salvador. Alicia and her husband met while doing missionary work in Guatemala. Jonathan Farrant’s father Peter, was the founding pastor of iglesia El Calvario in Orlando, who later moved his family to Guatemala in the late eighties. Today, they have five-beautiful children who assist them in their missionary work. She is also a registered nurse.

According to Mrs. Farrant, Wigs of Hope, a project of the Farrant’s non-profit, has provided over 300 wigs to children, which Farrant hand sews, to kids suffering from cancer in Latin America.

Farrant told the Central Florida Post that her decades long experience of missionary work around the world has taught her the importance of service above self. She believes that makes her a uniquely qualified candidate.

“I have spent my life helping those who need our help the most. It’s really something that fuels me spiritually and emotionally, allowing me to not only be the best person that I can be, but the best mother and wife as well. A lot of people get into politics to serve themselves or some special interest group. Right now, the schoolchildren of Orange County need someone with a strong moral and ethical backbone, who will put their educational needs over the whims of radical ideologies that have no place in the classroom,” Farrant explained.

For more than a year, she has been doing just that as a concerned parent of five children, who have all been raised in the Orange County Public Schools system, according to her campaign website. She first started attending board meetings and speaking with school officials about her concerns over mandatory masking policies. Farrant says that not only do the masks fail to stop transmission of COVID-19, but that the choice of whether or not to mask schoolchildren should remain up to individual parents, not the government.

“As a parent, it‘s my responsibility to make that decision for my children. I did not sign up to co-parent with the government, it’s that simple,” said Farrant.

She has become involved with parental rights groups like Moms for Liberty and Freedom Keepers, who have been fixtures at anti-lockdown or anti-mandate protests and public meetings across the nation since the outbreak of the pandemic.

The issue of mandatory masking isn’t the only issue that Farrant has with the current school board leadership in Orange County. She also takes umbrage with the lack of action from the board when it comes to increasing the salaries of educators. However, Farrant thinks that politically motivated teachers unions have lost focus on securing those pay increases because they spend far too much time involving themselves in radical far-left political skirmishes that have nothing to do with protecting quality teachers or providing a quality education to students in Orange County.

“The OCPS School Board has failed our teachers as much as they have failed our students. We have the best teachers in the nation right here in Orange County, who should be honored and celebrated. As far as the teachers unions are concerned, they should be less focused on politics and more focused on helping to attract quality educators. We need to get back to the basics in our public schools that the foundation of our Great Nation was built upon.”

Farrant’s activism for parental rights extends past issues related to mandatory masking and other matters relating to the school board’s response to the COVID-19 pandemic. She has spoken out against the injection of Critical Race Theory into the curriculum and how children are being sexualized by pornographic materials that have flooded public school libraries across America.

Late last year, this journalist was approached by Alicia and Jonathan Farrant before a board meeting. They provided me a copy of the filthy pornographic novel Gender Queer, which was discovered in several of the districts high schools, which not only discusses a myriad of extremely adult sexual acts, but also depicts them in depraved illustrations. This journalist used his public comment time as a citizen of Orange County to read the book aloud to the OCPS School Board. Chairman Teresa Jacobs responded by having a meltdown on the dais and ordering the OCPS Police to forcibly remove this journalist from the meeting.

The gestapo’esque act was filmed and quickly went viral. In the following days and weeks, Farrant was quoted in publications from around the world slamming the book and calling for it to be removed from public schools. OCPS quickly removed the filthy pornography book, earning Farrant and many concerned parents in Orange County a clear victory.

The school board is still doing an internal review of Gender Queer to see if they will return it to school libraries. Farrant has since reported the book and several others in an official complaint. She says she is waiting for a response.

Looking forward towards what issues she will build her campaign around, Farrant told the Central Florida Post that simplicity and a return to morality is where she will start.

“Our schoolchildren need to focus on the basics. Reading, writing, arithmetic. An understanding of our American history that is not altered to incite racial division, but to understand the uniqueness of the freedoms and founding principles that make America a land of great opportunity for everyone.

My goal is to create unity no matter what political background you are from. To create a space where students can thrive and teachers can get back to the heart of teaching. I believe, together, we can raise the stand of excellence and create a better school system for our children!”

Those looking to get involved with Farrant’s campaign, or to donate to her efforts, can click here.