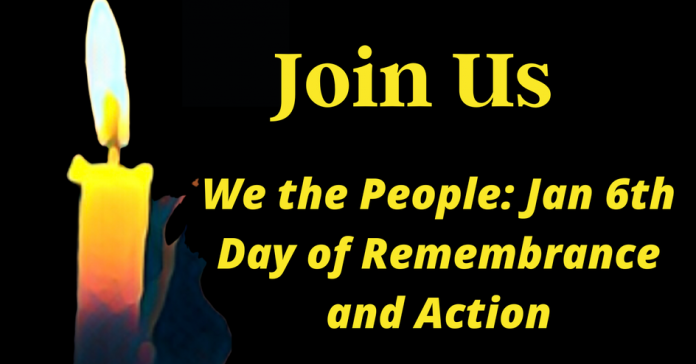 According to an invite being pushed by the Orange County Democrat Party, they plan on hosting a vigil to vilify fellow Americans who continue to rightfully acknowledge the widespread fraud that occurred during the 2020 election.

As the one year anniversary of the peaceful protests that occurred in our nation’s capitol on January 6th, Democrats are planning a “vigil” to vilify Trump supporters and any other American citizen who dares to question the mainstream media narrative about the documented and widespread voter fraud that occurred during the 2020 elections.

In the year since, hundreds of videos and activists present during the January 6th protests have made it clear how the Capitol Police ushered in thousands of protestors onto the capitol grounds. Just today, two suspected federal operatives (Ray Epps and Stewart Rhodes) have been subpoenaed as part of a court case involving the Oath Keepers. The National File published a story earlier today about this, discussing the increasingly substantial evidence that both were working on behalf of the FBI or intelligence agencies in an effort to push others to join them in committing illegal acts.

A third man, John Sullivan, a member of the BLM and Antifa movement who disguised himself as a Trump supporter as he urged individuals to commit illegal acts, eventually sold the footage to CNN before the money was confiscated by federal prosecutors.

Several people were murdered on January 6th, including Air Force veteran Ashlit Babbit, who was gunned down by Capitol Police officer Lt. Michael Byrd. Another was beaten to death by Capitol police officers, according to African-American conservatie activist Phillip Anderson.

Philip Anderson: Capitol Police Killed Rosanne Boyland on Jan. 6 – “She Was Holding My Hand When She Died” (AUDIO)

Despite this, Democrats and the media have been relentless in claiming J6 was an “armed insurrection”, which is not true, and claiming that nearly a half-dozen police officers were murdered during the protests, also not true.

The invite for the “January 6th Vigil for Democracy”, claims the following.

On January 6, a faction of elected officials turned their backs on America by inciting armed right-wing militants to attack our Capitol and then tried to block an investigation to cover up their role in this violence.

This was a violent and deadly attack on all Americans – on our country, our democracy, and our freedom as voters, to choose the leaders that represent us so that we have a government of, by, and for the people.

Mounting evidence shows that some elected leaders aided in the planning of this attack. These same lawmakers are continuing to spread daily lies about the validity of the 2020 election to keep their supporters engaged and enraged, which has led to death threats and violence against public officials.

These are interesting words coming from Democrats, who actively encouraged and financially supported years of violent riots by Antifa & BLM. Not once did they decry actual violent invasions of federal or local law enforcement agencies. Not once did they become outraged when these domestic terrorists murdered fellow citizens or police officers trying to protect the public.

However, post J6, the very same people who encouraged that very factual domestic terrorist activity and then said defunding law enforcement was the only way to end it, are spending their every waking moment calling for a federal police crackdown on political opponents.

The Biden Justice Department has obliged, jailing decorated veterans and docile grannies for the crime of “parading through the capitol”. Dozens or more federal officers, and fully armed, have conducted dozens or early morning raids on the homes of those present during January 6th, behaving like they are seizing the next “El Chapo” cocaine kingpin rather than their fellow American citizens. Once seized, many have been left to languish in horrific prison conditions. Some have been denied cancer medications, beaten by guards, had their cells flooded with sewage.

Congressional Democrats have also gotten in on the action, with their creation of the J6 Committee, which has been subpoenaing prominent Trump supporters for the crime of being present at constitutionally protected free speech gatherings on both January 5th and January 6th.

So, it should come as no surprise that the Orange County Democrats, led by a man (Wes Hodge), who cheered on the domestic terrorist actions of BLM and Antifa, supporting violent property destruction that often leads to the tragic loss of life of shop owners or good samaritans who attempt to stop the mayhem, are teaming up with the local branch of the Orlando Democratic Socialists to continue their own local version of January 6th fear-porn.

Democratic Socialists of America believe that ALL (yes… ALL), prisons should be emptied and that law enforcement should be abolished. They also think that illegals should have the same voting rights as natural born and properly (legally) assimilated immigrants. Public control of all private enterprise, telecommunications, and banking institutions under the banner of “social, racial, economic, environmental” justice is another top priority.

The phony vigil, a political form of kabuki theater, will take place on January 6th from 6-7PM on the corner of Robinson Street and North Eola Drive.

We will be there to document the performance art. At the time of publishing, we are working to confirm with the City of Orlando to determine if they are properly permitted.