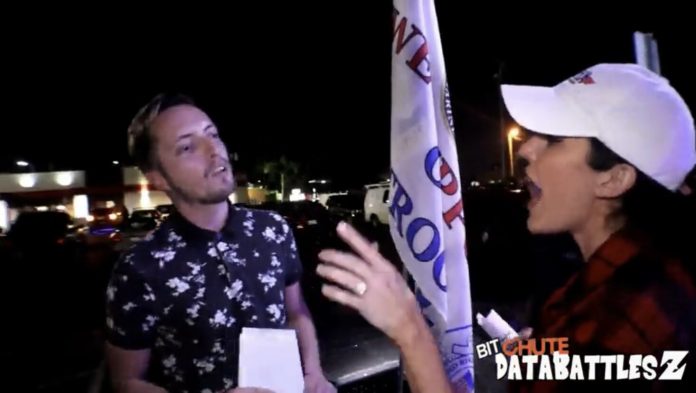 Luna, whose real name is Anna Paulina Mayerhofer, refuses to acknowledge her past employment as a dancer at the Red Rose Gentlemen’s Club in Fort Walton Beach, allegedly falsified her voter registration in Florida, claims that Roger Stone tried to poisoned her.

For the past several months, the Central Florida Post has been covering the melodrama that is the Anna Paulina Luna campaign for United States Congress in Florida’s 13th congressional district.

This includes her accusations that Trump advisor Roger Stone tried to “poison” her, how she colluded to get a decorated Marine combat veteran booted from a TPUSA event, and how she spent $150,000 of campaign funds on lawyers to continue her wild accusations that a cabal of candidates tried to organize a “hit-squad” to target her.

Luna pursued legal action to obtain a permanent restraining order surrounding these claims, something a local judge denied earlier this fall before closing the case.

In recent months, this journalist was thrown out of an Orange County Public Schools board meeting for exposing the fact that a pornographic gay sex novel was being provided to children without parental consent (police removed us from the meeting for merely quoting the book, a video that went viral and led to the removal of the dangerous literature).

We remind you of this because of the fact that Luna’s campaign and her supporters routinely malign Central Florida Post as “liberal hacks” or opponents of the America First movement, which is a total lie.

Last Friday, we confronted Anna Paulina Luna (real name Anna Paulina Mayerhofer) during a campaign event she organized at the Largo, Florida based Conservative Grounds coffee shop, which has become a popular hangout for Trump supporters from across the state of Florida, even snagging a shout-out from Donald Trump, Jr.

Central Florida Post set out to get a series of questions answered directly by Mayerhoffer, who is notoriously unwilling to take tough questions.

Why did she check the “White, not of Hispanic origin” box on her voter registration card in 2015 when she registered to vote in Florida? In current times, she claims to be Hispanic, with Mexican roots. Yet, for years, and presumably to present day, she does not officially claim that heritage on official registration documents.

When asked directly about this discrepancy, Luna claimed our questioning was “white shaming”, before retreating to a pickup truck outside of Conservative Grounds. As she emerged, Luna threatened a lawsuit over our line of questioning.

If she can’t handle hard questions from a journalist who is politically aligned with the America First movement, how the heck can we expect her to stand up to people like the dopey bartender AOC in the United States Congress?

Luna supporters then began hurling profanities in front of children, despite later accusing this journalist of “becoming vulgar” in front of children. Luna advocate and former congressional candidate Sharon Newby, even said that she “doesn’t like your kind”, referring to the fact that I am a gay conservative journalist.

You can watch her supporters go wild below.

President Donald Trump has long supported marriage equality, famously slamming Hillary Clinton’s record on the issue when he was a Manhattan businessman while she served in the United States Senate for New York. Candidate Trump would become the first Republican candidate to hold the LGBT flag on stage during a rally in 2016. He even appointed Ric Grennel as the Director of National Intelligence, the highest ever appointed member of the LGBT community in a high level cabinet position.

In 2014, when she was still active duty in the United States Air Force in Fort Walton Beach, Ms. Mayerhofer was working as a dancer (stripper, exotic entertainer) at the Red Rose Gentlemen’s Club in Fort Walton Beach, an establishment that was on the “Do Not Go” list for active duty members. Police reports, with sworn statements from witnesses, identified Luna’s role at the strip club as that of a dancer, though Luna has repeatedly claimed that she was “just a cocktail waitress.”

Years ago, while attending a friends bachelor party at Red Rose Gentlemen’s Club around the same time of Mayerhofer’s residency as a dancer, I did not witness a difference between the activities of those working as dancers and those serving cocktails, from what I recall.

The woman who witnessed Mayerhofer working as a dancer, was at one point involved with Mayerhofer’s ex-husband Andy Gamberzky during their estrangement, during which Anna filed a protective order against the other woman, who she claimed was in violation of that order by showing up to the Red Rose Gentlemen’s Club. An investigation by the Okaloosa County Sheriff’s office found Mayerhofer’s allegations to be untrue and did not pursue charges.

When asked directly about her past at the Red Rose Gentlemen’s Club, owned by Cash’s Liquor, which has drawn controversy for billboards proclaiming “Getting America Laid and Happy Since 1965”, Luna continued to claim she “wasn’t a stripper”, but did admit to working there in violation of the United States Air Force “Do Not Go” policy.

During our time trying to get the truth from Ms. Mayerhofer, her supporters did get physical and nasty on several occasions, behaving more like Antifa and BLM Democrats than members of the America First movement.

Following our encounter with Luna, David Happe, a noted pro-Luna podcaster who has not been shy about his support of her campaign, reached out to us to ask for an interview, which we happily accepted as we have nothing to hide.

In that interview, which you can listen to here, we discuss many of our concerns with Happe, confirming that a direct question and answer interview with Mayerhofer is the only way that voters can learn the whole truth about her record.

Happe provided us documents that proclaim to prove Mayerhoffer’s military service, during which she was not deployed or involved in combat operations, despite campaign messaging discussing “spilling blood” and imagery that would lead voters to believe that she was a special operator. He also provided Ancestry.com results purporting to be from Mayerhofer, that claim she is 33% “Spanish or Portuguese”, despite some of her supporters claiming she is “50% or more” Hispanic.

If true, why not check Hispanic on your voter registration Anna?

An article accompanying Happe’s podcast improperly claimed that we we were harassing Mayerhofer’s supporters during the campaign event, which was a toy drive for local children, where Mayerhofer’s campaign staff was present and handing out promotional materials or apparel for the campaign. As a journalist, confronting candidates in person is the only option we have left when they refuse to be honest (or participate at all) in interviews conducted through email, phone calls, or text messages.

We respect Mr. Happe’s work as a podcaster and local publisher, standing by his constitutionally protected free speech rights as we do any American citizen. As Mr. Happe openly admitted during our interview, he and I likely agree on nearly 100% of the issues, our feelings on Anna Paulina Mayerhofer notwithstanding.

This is not in any way, shape, or form “harassing.”

The Central Florida Post investigation into Anna Paulina Mayerhofer is ongoing and will continue until the voters get the answers they deserve. As the nation hangs on by a thread under the disastrous leadership of “President” Joe Biden, it is imperative that the candidates put forward in the 2022 election cycle are completely above board, lest we give the Democrats an opening to make voters uneasy about casting their votes for Republicans.

Unfortunately, President Trump has been burned by recent early endorsements in GOP primaries, most specifically in the Pennsylvania GOP US Senate primary, where a candidate with a slew of personal shortcomings like Mayerhofer, had to drop out of the race after an embarrassing custody case with his ex-wife, just after receiving the endorsement of President Trump in a hotly contested primary, much like Florida’s 13th congressional district.

This is why we will continue to ask these questions of Anna Paulina Mayerhofer, so that President Trump is not put in an equally as embarrassing situation where a candidate he has previously backed has to drop out due to their messy personal lives.