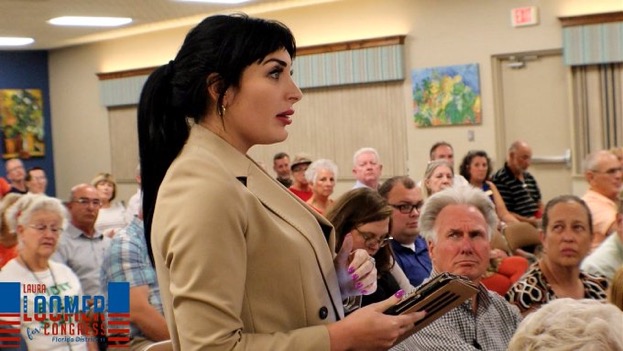 Activists that drive turnout in Republican primary contests are signaling that Laura Loomer is the kind of candidate they want in Florida’s 11th congressional district.

Just months after announcing her candidacy for congress in Florida’s 11th congressional district, investigative journalist and author Laura Loomer appears to have a lock on key grassroots leaders across the district. Loomer, who recently mounted a primary challenge against career politician Dan Webster, also nearly doubled the incumbent in donations collected last quarter, according to The Floridian Press.

Webster has served in elected office since 1980, making him the quintessential career politician who is more concerned about cocktail parties than his constituents.

Now, activists in the district, some of whom currently or previously held leadership roles with the Lake County Republican Executive Committee and influential conservative political groups are telling the Central Florida Post that Loomer is their choice in next summer’s August primary election for the GOP nomination in Florida’s 11th district. Considered one of the most conservative districts in the state of Florida, the person who emerges victorious from the primary will head to the nation’s capitol in January of 2023.

Sue Parent, a board member of the Lake County Voting and Election Integrity Project, which is pushing for a full-scale audit of the 2020 election in Lake County, called Loomer a go-getter who will fight for the needs of the local community.

“For me, grassroots means that ordinary, average citizens get together, in part, to improve the social and political needs of their community. Laura Loomer is a go-getter and is willing to step up for Lake County citizens regardless of their party affiliation. She is seeking truth in government and I am all for that,” Parent explained.

To understand the future, we must look to the past. And Loomer’s track record on accountability in her capacity as a journalist paints a very scary picture for the establishment on both sides in Washington, DC. She birthed a form of guerrilla journalism, where she calls out elected leaders, political candidates and the powers-that-be in real-time, recording the whole thing and streaming to her millions of followers on social media.

Over the years she has confronted former FBI Director James Comey for his many lies and misdeeds. She caught Hillary Clinton at a Costco book signing with some very uncomfortable questions. Both Gavin Newsom and Nancy Pelosi are also on the list. Loomer was even arrested and thrown out of the trial for the wife of the Pulse shooter for highlighting the role radical Islam played in motivating the shooter in carrying out the attacks and his wife in assisting his efforts.

Often referred to as “the most banned woman in the world”, Loomer is no stranger to deplatforming and censorship, she’s been banned on every major digital platform that most of us consider an integral part of our lives. This lead her to “Loomer” Jack Dorsey during a congressional hearing, where members of the establishment GOP targeted her instead of standing up for free speech and against the tyranny of big tech.

“I have been following Laura for years and am so impressed with her ability to hold the powerful accountable. Before she announced her campaign for congress, she spoke to one of the largest crowds we’ve ever gotten. The fighting spirit she has maintained over the years was present that day and remains so. We need that kind of energy in Washington to protect our founding principles,” said Vail.

Over the years Loomer has become a fixture across Florida, drawing hundreds of people to hear her speak, hitting nearly every part of the Sunshine State to attend rallies or confronting rotten politicians. During the 2018 campaign and recount efforts in the Ron DeSantis vs. Andrew Gillum race, I remember Loomer traversing the state with me as we relentlessly exposed Andrew Gillum, a months-long effort that Big League Politics said was crucial in stopping Florida from becoming a socialist state.

Jim Volpe, who served as President Trump’s campaign Chairman for Lake County 2016, was also the Vice President of Villagers for Trump from 2017 to 2019. Volpe helped organize the Trump Day Dinner in October of 2018, which was attended by President Trump.

“I have 15 years of experience in Lake and Sumter County politics. Other than in my campaign for Donald Trump, I have never experienced this level of  enthusiasm for a candidate for office in our area as I have for Laura. I visualize her popularity growing similar to what I experienced in 2016 with then businessman Donald J. Trump,” Volpe told the Central Florida Post.

Even Michael Levine, who was the Chairman of the Lake County GOP in a pre-Trump era, is pushing for Loomer to defeat incumbent Congressman Daniel Webster in the 2022 primary. Levine thinks Webster is part of the problem in DC and must be removed from office.

“We need someone who will truly fight for the core American values that make this country great. There is no middle ground and we cannot afford to allow people like Dan Webster to continue to waste his seat in congress while our country is being torn apart from within by anti-American forces that DC-insiders like Webster refuse to stop. At this point, he is just a placeholder for his friends in the Democrat party,” concluded Levine, who also said that Webster’s refusal to raise his hand in recognition of the 2020 election being stolen during Lake County GOP’s recent Lincoln Day Dinner was “outrageous.”

With Loomer quickly rounding up a rolodex like this for her campaign and no signs of her campaign slowing down in sight, one has to wonder if Congressman Webster will ever wake up or fight back.

If his lackluster fundraising performance and increasing reclusiveness are any indications, the answer is a resounding no. And that’s good news for the citizens of Florida’s 11th congressional district.

Love her or hate her, Loomer’s track record proves she has the willingness to put in the work that people should expect from their elected representatives.