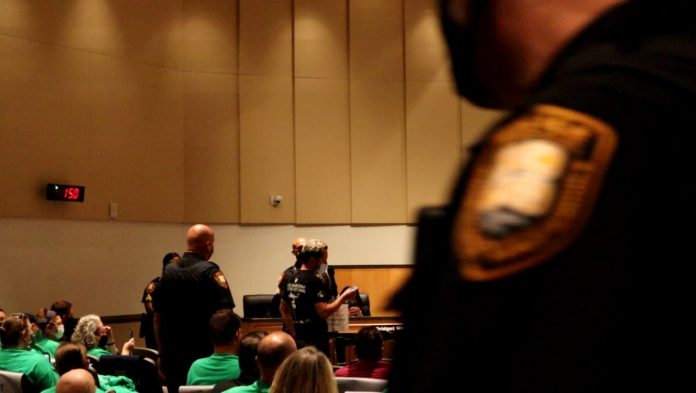 Apparently a graphic pornographic novel is okay for students in Orange County to read privately, but not for this journalist to read aloud to members of the Orange County Public Schools Board.

**FIRST PUBLISHED IN THE GATEWAY PUNDIT**

In Orange County, Florida on Tuesday, this Gateway Pundit contributor attended the Orange County Public Schools board meeting to document the discussion on their illegal mask mandate, which is in violation of Governor DeSantis’ executive order banning such mandates on students.

The Orange County School Board is one of a handful of Florida’s 67 county boards that have flaunted the governor’s order, even as the courts have sided with the DeSantis administration pending current litigation of the matter.

However, shortly before the meeting, this journalist was approached by two concerned parents about a sexually explicit book, which has garnered national attention, that their child found featured prominently in the library of Boone High School on a bookstand promoting the LGBT community during Pride Month.

Gender Queer includes countless images of male-on-male sexual encounters, accompanied by words that one would expect to find inside literary works at adult pornography shops or gay sex clubs and bathhouses. Even so, this book was purchased and pushed by school officials at Boone High School in Orlando, Florida, despite it clearly violating county guidelines.

Jonathan Farrant, who showed up with his wife to express his outrage over the book being made available and given special promotion by Boone High School Staff, told TGP the following in a joint statement with his wife Alicia.

“We are completely disgusted at this evil and how the OCPS School Board, Principal, Librarian and others would have the audacity to allow this type of pornographic filth in our schools. It is time to raise up an army of people and parents that are willing to stand for the morality of our educational system,” stated the Farrants.

When public comment commenced ahead of the listed agenda items during Tuesday afternoon’s meeting, this GP journalist used his allotted time to alert OCPS Board Members of the situation by reading some of the more graphic passages from Gender Queer.

With no children present at the meeting, it is unclear why OCPS Chairman Teresa Jacobs did not want parents to be made aware of the explicit nature of Gender Queer, especially as it violates the district guidelines she was elected to uphold. This same school board claims to be interested in “protecting” children by forced masking, but their concern for the moral and ethical well-being of those same children who are being exposed to pornographic material, seems to be non-existent.

Parents sitting in the front row were outraged over the removal and excuse by OCPS Board Chair Teresa Jacobs, who claimed she had “no idea” the book was in the classroom, to which the parents replied “that’s the problem.”

Brevard County Public Schools, which neighbors Orange County,immediately pulled the book from schools after they were made aware that students had access to it, for violating district guidelines. School Board districts in Virginia have also recently pulled Gender Queer for similar reasons.

State Representative Anthony Sabatini, who is running to represent Orange County in the United States Congress in Florida’s 7th congressional district, is calling on the OCPS School Board to resign immediately in wake of the news about Gender Queer.

“The entire Orange County School Board must resign immediately. This absolutely disgusting and potentially criminal decision to put these pornographic materials in the schools is disturbing. It’s a shocking new low, even for Orange County,” Sabatini explained via text.

The content is so abhorrent, that Virginia TV stations have refused to air an ad from a group called Independent Women’s Voice showing images of the illustrations in Gender Queer, according to a report from Yahoo News.

The OCPS School Board took no immediate action during Tuesday’s meeting. County officials and represenatives of Boone High School did not respond to requests for comment.