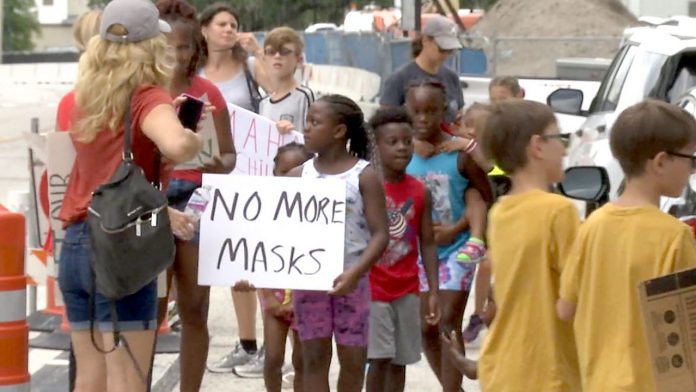 As parents across the nation have expressed frustration over Critical Race Theory, adult sexual conversations being adopted into curriculum and masking mandates… their anger should be applauded.

Earlier this month, the Biden Justice Department released a statement that they intend on dispatching federal investigators and prosecutors to “assess” death threats and outbreaks of violence at school board meetings nationwide, even going as far as to say that parental anger fit the definition of “domestic terrorism.”

This came after the National School Board Association called on the Biden administration to do just that, send federal “shock troops” to quell dissent during public meetings from sea to shining sea.

Like clockwork, within days of this plea from the far-left NSBA, the Biden Justice Department agreed to the demands. Never-mind that public discourse in America, especially before elected bodies, is the thread that stitched together the fabric that helped our Founding Fathers write the US Constitution and declare independence from Great Britain.

Our new normal is whatever the woke mob or partisan political overlords desire, our history and our strengths as a nation be damned.

In Orange County, the Orange County School Board is set to meet on Tuesday, October 26th. This marks the 60-day conclusion of a mandatory masking policy that the majority of parents have opposed.

When this rule was instituted in August, the OCPS Board promised to review the policy in 60-days and decide whether or not to extend it or revert back to an opt-in policy where parents could make the decision on whether or not their children needed to be masked for 8-hours a day while on school grounds.

Since then, the OCPS Board has limited public comment and taken other draconian measures at the behest of local mask and vaxx activist groups, tossing the concerns of every other parent aside in a brutally aggressive manner. Despite attempts to limit public comment or prioritize left-wing speakers, I was honored to earn an applause during a previous OCPS Board meeting, where I advocated for a return to freedom from tyranny.

Nevertheless, groups like Moms for Liberty have remained vocal in their opposition to the mandatory masking mandate, and they should. We don’t enter into a co-parenting contract with the government when we send our children to school. They are sent there to learn, period.

However, with the looming threat of being classified as a “domestic terrorist” and being put under the boot of unrestrained federal officials, what is the proper response for parents or other community leaders who support parental choice?

The response is to remain fearless. Continue to show up at these meetings.
The anger and frustration on display over OCPS Board defying Governor DeSantis’ lawful (and court upheld) order against mandatory mandates means that they are the lawbreakers. They are the ones who should be under investigation and charged.

Fear is a powerful tool and from local far-left activists all the way up to President Joe Biden, the mob has been deputized politically and legally to continue their fear mongering to scare us into submission.

Say no to fear and do not submit. We hope to see everyone on October 26th for the next OCPS Board meeting, where we will be filming from end to end in order to protect parents from being maligned by the media or powerdrunk authoritarian activists who use deceptively edited videos to frame themselves as victims.

Please email jengels@centralfloridapost.com for more information, or for ways that you can help hold the OCPS Board accountable.