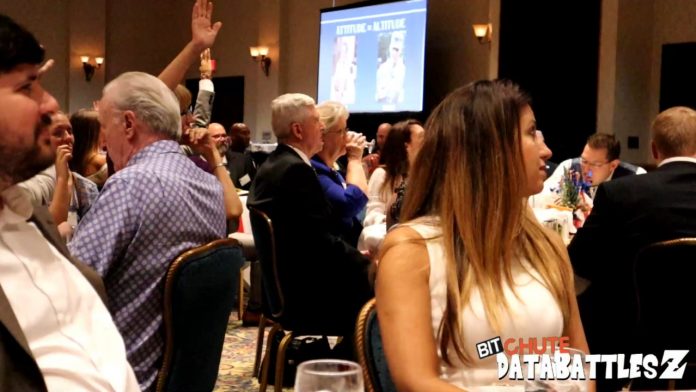 The congressman for Florida’s 11th district, who has held elected office since 1980, refused to acknowledge the widespread voter fraud that allowed the election to be stolen from President Donald J. Trump in 2020.

In what is sure to become a flashpoint in Central Florida politics during the August primaries of the 2022 election cycle, the Republican primary race in Florida’s 11th district continues to heat up as it likely heads towards a veritable fever pitch for America First advocates seeking a true advocate in D.C.

This past Friday, one of our journalists was able to attend the Lake County GOP Lincoln Day Dinner at the Mission Inn Hotel. Featured speakers included former Army Captain Seth Keshel, who has gained notoriety for his research concluding that the 2020 election was in fact stolen as a result of fraudulent or manipulated voting that helped secure a Biden victory “on paper” against President Trump.

Keshel has been working with former National Security Advisor General Michael Flynn on election integrity. Loomer was the first congressional candidate endorsed by Flynn in the 2020 elections.

During Keshel’s speech, he asked the crowd on two occasions to affirm, based on his evidence and the evidence of dozens of other experts, that not only was the national vote compromised by massive voter fraud, but that even the state of Florida fell victim to such fraud.

In full view of the entire gathering of hundreds of GOP activists, Congressman Dan Webster failed to acknowledge this fact, according to a journalist from the Central Florida Post and numerous other sources who were present.

For many, this is a blatant slap in the face to America First advocates who remain angered at GOP inaction over the blatant election theft. However, for Webster, this is not just a simple faux pas, but rather another thread for his primary challenger Loomer to pull from as she mounts an impressive primary challenge to the career politician who has not encountered a legitimate or vigorous primary challenger in decades.

And the pulse of the people certainly seems to be swaying to Laura Loomer, who nearly doubled Congressman Webster in last quarter’s fundraising haul, according to the Floridian Press.

For voters, Loomer provides them a true chance at having an activist member of the United States Congress representing them in DC, a departure from the hands-off and accomplishmentless tenure of Mr. Webster who has struggled to rally support for a continuation of his time as an elected official which began in state government in 1980.

Prior to Loomer announcing her challenge of Webster just over a month ago, the congressman rarely tweeted or hit the talk-show circuit in defense of President Trump’s victory in the 2020 elections or his long list of historic accomplishments. His public commentary remains anemic.

As we find ourselves fighting for the very fabric of our nation, the presence of people like Daniel Webster under the banner of the GOP, which remains almost 100% loyal to President Trump, presents a very serious problem for the survival of the Republic.

The appetite for do-nothing politicians like Webster is non-existent. The hunger for fighters like Laura Loomer who have proven time and again that they are willing to take the fight for freedom to the streets is palpable.

Just this past weekend, she marched with hundreds of personal choice and medical freedoms advocates through the streets of Downtown Orlando.
For those asking the last time that Congressman Webster showed such outward and public passion?

It was 1978, the first year he considered and ultimately ran for elected office in the next cycle. The Sex Pistols played their final show. Ted Bundy went on a murderous rampage at Florida State University and The Bee Gees’ “Stayin Alive” was the #1 hit song.

*Congressman Webster’s campaign refused to address his behavior at the Lake County GOP Lincoln Day Dinner, instead attacking the integrity of this publication and engaging in other acts of deflection.*