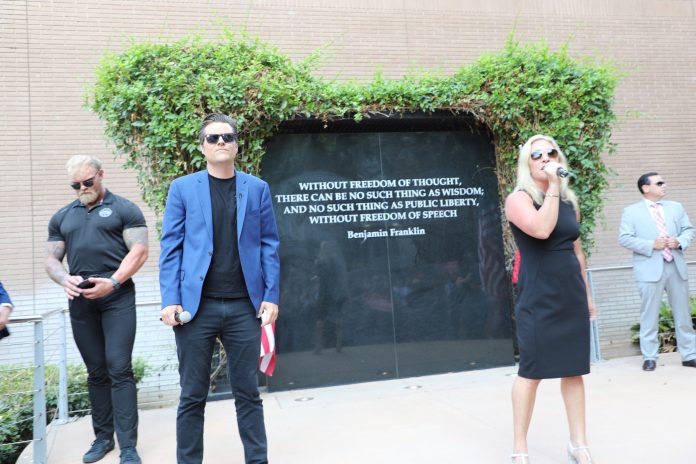 FIRST APPEARED IN THE GATEWAY PUNDIT

Several weeks ago, Congressman Matt Gaetz and Congresswoman Marjorie Taylor Greene were in the state of California hosting several rallies across the state as part of their “America First” tour across America.

After far-left activists were able to pressure the town of Riverside from allowing one of those rallies to occur within city limits, the duo announced that they had found a place to host their rally in the City of Anaheim. Like before, far-left activists went into full panic mode on social media and urged their cohorts to conduct another online pressure campaign, this time targeting Anaheim city officials and members of the Anaheim City Council.

Public records obtained by this journalist, shared publicly for the first time as an exclusive for TGP, show just how demented the Democrat party has become in 2021.

Close to a dozen individuals in total petitioned the City of Anaheim to take action against the America First rally, claiming that hate speech was not constitutionally protected (which it is, but we all know that being America First is now hate speech). Only a handful of those emails calling for the City of Anaheim to take action were from actual residents, including a former public official who was booted from an appointed post several years ago after appearing at an open-borders rally alongside members of the domestic terrorist organization Antifa.

These records also show Councilmember Jose Moreno emailing his fellow elected officials to consider a review of the private venues conditional use permit as a means of shutting down the event if the owners refused to cave to public pressure, claiming that the rally would have a high likelihood of violence. However, a review of livestreams of the dozens of America First rallies held by Gaetz and MTG so far do not contain evidence to support those claims. Furthermore, it is a known fact that any violence that occurs at pro-Trump gatherings comes from domestic terrorist groups like Antifa and BLM.

Morero also suggested a strong statement of opposition to the event occuring in the City of Anaheim be disseminated. And they did just that, as you can see in the tweets from the City of Anaheim. This means that the Anaheim City Council plotted internally to coerce a private venue to cancel an event, either through veiled threats about the standing of their current permitting or public pressure via official statements released to the public.

It doesn’t end there. City officials were also instructed to inform the venue owners of outstanding code enforcement issues related to unpermitted tenant improvements on the property as a way to pressure them into cancelling the rally in order to prevent “negative impacts” on their property and surrounding areas. This is documented in a follow-up email that a City of Anaheim Code Enforcement official sent to the owners of the private venue.

Two city officials forwarded this email along with congratulatory statements, patting themselves on the back for using the power of the city to coerce a private venue into shutting down a rally featuring two members of congress that are staunch defenders of President Trump’s America First agenda.

Sandra Lozeau, the Community Preservation and Licensing Manager of the Code Enforcement Department exclaimed “YES HE DID. GO TEAM.” Another city employee, celebrated by saying “THANK YOU :).”

The City Commission, the administrative staff and law enforcement of the City of Anaheim used their power as elected officials and employees paid by taxpayers to silence constitutionally protected free speech. They used their power to coerce a business owner of a private venue to cancel an event because they hate America First… and then the celebrate about it never thinking that their backroom dealings would see the light of day.

Congressman Matt Gaetz and Congresswoman Marjorie Taylor Greene had suspected that the City of Anaheim had applied some pressure on the private venue and have stated that they will be taking legal action against the city for doing so.

“The City of Anaheim publicly bragged about shutting down our America First rally because of our viewpoint. These internal emails are the legal smoking gun that our First Amendment rights were violated.

We will return to Anaheim. Next time, with an injunction against the oversoyed tyrants of their government in hand,” proclaimed Gaetz.

Congresswoman Marjorie Taylor Greene was equally as upset when told about the public records this journalist obtained, calling it “shocking and appalling.”

“Last month, Matt Gaetz and myself had our America First Rally cancelled over and over again by Californian cities acting as little Communist dictatorships hell-bent on silencing free speech.

Now, internal emails from City of Anaheim officials reveal that their attack on the First Amendment was plotted and schemed with the taxpayer dime and targeted us specifically because of our views.

It’s shocking and appalling that government officials hate conservatives in California so much that they use the power and force of government to shut us down.

The America First rally tour with Gaetz and Greene was recently in Florida and is expected to continue throughout the rest of this year. Congressman Gaetz is also confirmed as a headline speaker at the American Priority Conference in October, alongside Roger Stone, General Michael Flynn, Dinesh D’Souza, Congressman Paul Gosar and others.