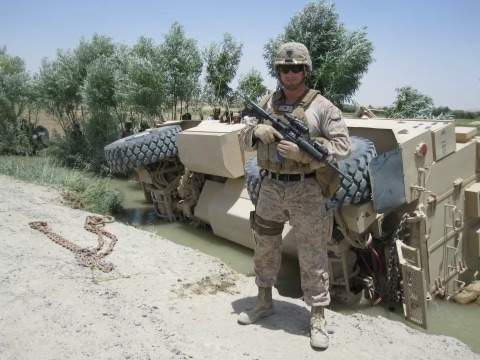 Despite constantly crowing about “fighting cancel culture” and standing up to censorship, the Charlie Kirk led group has sunk to a new low by forcibly removing a Marine combat veteran, who served during two deployments, from their Student Action Summit in Tampa.

In a shocking show of disrespect to a United States Marine combat veteran, TPUSA officials had prospective congressional candidate Matt Tito removed from their Student Action Summit in Tampa on Sunday.

Tito is a close friend of veteran political strategist Roger Stone and was falsely accused by congressional district 13 GOP candidate Anna Paulina Luna of being involved in a plot to kill her. William Braddock, who until recently was Paulina’s primary opponent, was illegally recorded stating that he had access to Russian “hit-squads” that could “take Paulina out” if he determined she was a political threat to him winning the nomination. Tito has demanded a public apology from Luna regarding her allegations and is currently considering taking legal action against her to clear his name.

Mr. Tito was never involved in Braddock’s dubious machinations, but Paulina, who is deceiving voters with advertisements and photo shoots making it look like she saw combat, is extremely concerned about Tito’s viability as a prospective opponent, especially since he has called her out in the past for misrepresenting her service record. Even more worrisome to Luna is the fact that Roger Stone, a longtime advisor to President Donald J. Trump, would likely counsel Tito if he does indeed file paperwork to run for congress against Luna in the GOP primary.

Luna is so paranoid in fact, that she has even accused Mr. Stone of “trying to poison her” and went to great lengths to stop a profile on Stone for the publication El American, where she is a correspondent. Stone told the Central Florida Post that he is concerned about Luna’s “mental stability.” You can read about that here.

Back to TPUSA’s Student Action Summit. Tito was granted four VIP passes by the head of events for TPUSA to attend last week, which is why he was incredibly confused as to why a mob of security guards swarmed him in the lobby of the venue on Sunday afternoon.

“First they told me there was a conflict of interest and that was why I needed to leave the premises. Eventually they informed me that the source of that conflict was none other than Anna Paulina Luna,” explained Tito.

After exiting the venue peacefully, Tito was able to find out that the order came directly from TPUSA Chief Operating Officer Tyler Bowyer, something the Central Florida Post has been able to independently confirm. Bowyer was instructed to remove Tito by Luna, who claimed that Tito had been taunting her during the TPUSA event.

This is false according to Tito and several other people we spoke to who were on the grounds at the event.

“For an organization that likes to claim they don’t believe in cancel culture, they sure do cancel people pretty quickly when Luna sends the orders,” continued Tito.

TPUSA COO Tyler Bowyer declined to provide comment, instead directing this journalist to TPUSA spokesman Andrew Klovet, who also declined to explain why they decided to eject and embarrass a combat veteran who risked life and limb for his country.

Efforts to obtain comment from Anna Paulina Luna and her consultant James Blair, were also unsuccessful.

With an ever growing list of lies and dishonest manipulative behavior from Anna Paulina Luna, voters in Florida’s 13th congressional district should be increasingly concerned about her mental fitness for public office.

Turning Point USA should be ashamed for what they did to Tito and issue an immediate apology.