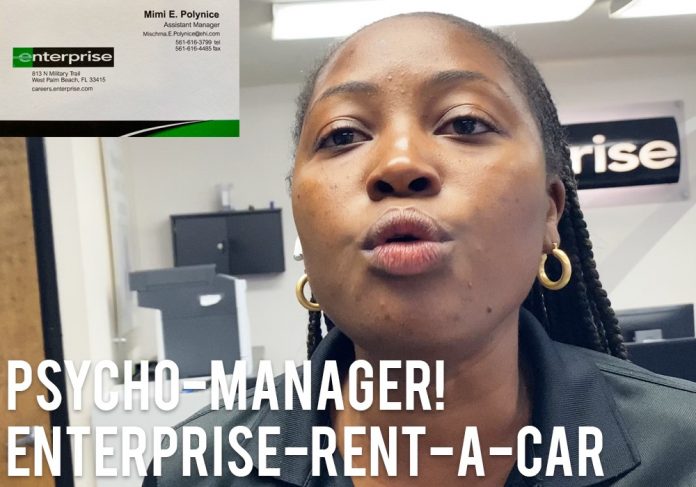 Mimi Polynice, an assistant manager at Enterprise Rent-A-Car West Palm Beach, berated a customer before citing “privilege” and aggressively snatching the keys from the ignition.

Bobby Pickles, who runs a t-shirt printing company in West Palm Beach, Florida thought it would be a quick in-and-out while picking up his rental car at Enterprise Rent-A-Car on Thursday.

However, the seemingly simple process quickly turned into a nightmare. After checking in and waiting nearly 45-minutes for an employee to turn over possession of a rental car he had already paid for, Pickles realized that he needed to remind the staff that he had yet to receive the keys.

So, he went back inside and asked another employee what the status of his rental was. That’s when Mimi Polynice, the African-American assistant manager, informed him he needed to check-in and wait his turn. Pickles informed Polynice that he had already checked in and paid, having waited over 30-minutes.

Polynice then grabbed the keys to his rental and walked him outside, where Pickles began loading his possessions into the vehicle. This is when Polynice told him it was a “privilege” to have a rental car. Pickles, an Italian American with a light complexion, responded that she should not speak to her customers like that.

Privilege is a common term used by Marxist groups like Black Lives Matter to perpetuate the myth of “systemic racism” and the evils of White Americans.

And then, according to Pickles, Ms. Polynice told him that if he “said another fucking word” that she would cancel his rental. The West Palm Beach entreprenur reiterated that she was conducting herself in an unprofessional manner.

That’s when Polynice became possessed with rage and aggressively entered his rental vehicle, ripping the keys from the car as she shouted more expletives, before returning inside.

Fearing for the safety of Polynice’s fellow employees and himself, Pickles grabbed his camera equipment before reentering the Enterprise Rent-A-Car office to simply get the keys and leave before the situation escalated further.

Polynice remained in an aggressive and crazed state, hurling expletive after expletive towards Pickles, at one point approaching him in an extremely menacing manner, all of which is documented in the below video, posted on the Youtube account of Bobby Pickles’ podcast show.

Despite Pickles repeated attempts to deescalate the situation, Polynice continued to harass and badger him, leading to police being called, all caught on the above video.

Pickles gave a statement and then attempted to rent a car from two other local Enterprise Rent-A-Car locations, who informed him that he was placed on a “no-rent” list by Polynice. After reporting this to Enterprise Rent-A-Car’s corporate office and receiving numerous escalations of his request, Pickles has still not been reimbursed nearly $600 by the company or issued a formal apology.

Could you imagine if a WHITE assistant manager behaved in this manner towards a person of color? Treating them like an unruly child and lecturing them about their “privilege”? Black Lives Matter and other domestic terrorist groups like Antifa would be burning down the West Palm Beach Enterprise Rent-A-Car and it would be trending #1 on Twitter.

Pickles believes that Polynice was abusing her position of power over him due to his skin color and told the Central Florida Post the following.

I support the police, but we all know they have that blue line where they back each other up and will not snitch on each other — well, that same thing happens in corporate America.

I bet more people are going to start recording their interactions at some of these business institutions, so that employees are held accountable for their bad behavior.

I find it ironic that Enterprise-Rent-A-Car’s Twitter handle is @enterprisecares because I do not believe they truly care about their customers, if they allow their store managers to talk to people the way Mimi Ploynice felt entitled to speak to me.

The fact that this Enterprise assistant manager used the word “privilege” while denying me a service, makes me feel that there was a racist component to her hostility towards me. That word is a dog whistle in the BLM movement.

Furthermore, Pickles told us that the rental was for an employee of his, a person of color, who was having car troubles. In Polynice’s shocking attempt to lash out against a person she clearly believes is part of “systemic white supremacy”, she actually negatively impacted a fellow person of color.

Enrique Tarrio, an Afro-Cuban and Chairman of the right-leaning Pro-West men’s fraternal organization Proud Boys, a group that Pickles is a member of, said that Ms. Polynice has the privilege of having a job in this economy.

“The Democrats have destroyed thousands of businesses in America with their draconian and unconstitutional lockdowns. This Marxist outburst by an Assistant Manager of Enterprise Rent-A-Car is shocking, but not surprising. The one who needs to learn about her “privilege” is Mimi Polynice and she should lose her privilege of having a job for this overt act of discrimination,” concluded Tarrio.

Efforts to reach Mimi Polynice and her supervisors were unsuccessful. We will update you on this story as there is more information.

Those wishing to show their displeasure with Mimi Polynice, can call the West Palm Beach Enterprise Rent-A-Car by calling 561-616-3799 or by emailing her directly Mischma.E.Polynice@ehi.com