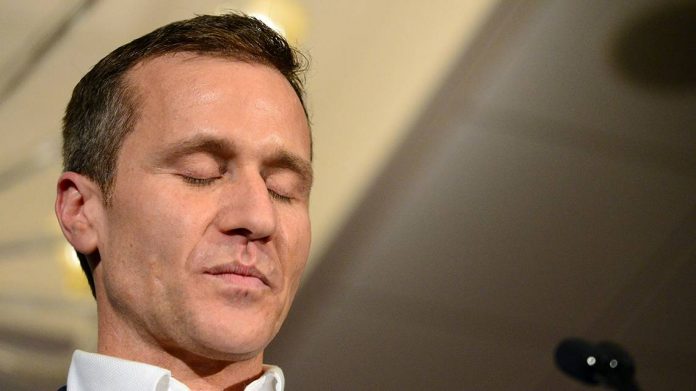 As for Eric Greitens, his past is chock-full of DEEP connections to these Deep State, America-hating globalists and his time as Governor of Missouri was riddled with policies that are in direct contradiction to President Trump’s America First agenda.

That’s why I was disappointed to see her name on the list of hosts for two Florida fundraisers for one of the most corrupt Never Trumper’s running for the US Senate today, Former Missouri governor Eric Greitens.

The facts about Greitens are so stunning I can only assume that Kimberly Guilfoyle is unaware of them.

Then there are the fundraisers themselves. The fundraiser in Naples, Florida is being run by JoAnn DeBartolo, who I have only recently learned is a grifter and clout chaser, far more interested in collecting money than actually electing any America first candidates to public office.

And then there is a West Palm Beach fundraiser, in which numerous people listed on the event committee have never given their consent, and in many cases are unaware that they had been listed.

Longtime Trump advisor and veteran political strategist Roger Stone, who has worked for ten presidential campaigns during his nearly 40-years working to elect America First candidates in all levels of government, is also concerned about Greitens.

When asked for comment about his connections to globalists and the Never Trump hacks of the Republican establishment, he told The National File the following.

“Why any supporter of President Trump would support Eric Greitens is beyond me. Greitens is a globalist who is closer to Barack Obama than Donald Trump and his background is sketchy to say the least . I agree with Senator Josh Hawley, this man should never be in the United States Senate.”

Now to the stunning facts about Soros puppet Eric Greitens, a man whose presence in a federal penitentiary would be more appropriate than his presence in the U.S. Senate.

Connections to people like George Soros, the World Economic Forum, Bill and Melinda Gates, Bill Clinton and the Obama’s should be a political death sentence for anyone running for political office as an “America First” candidate that proclaims they will carry on President Trump’s historic legacy.

As for Eric Greitens, his past is chock-full of DEEP connections to these Deep State, America-hating globalists and his time as Governor of Missouri was riddled with policies that are in direct contradiction to President Trump’s America First agenda.

First, let’s start with Greitens longstanding history of supporting Americorps, a program started by the Clinton administration that is funded by the American taxpayers and pinned up by globalist heavyweights like Soros, Gates, et al. While Americorps started with good intentions, the recent COVID-19 pandemic has shown the American people how government funded programs polluted by globalist ideologies can be used against the citizenry. Greitens has never walked back his support for Americorps, even as Bill Clinton has praised the government funded organizations army of “contact tracers” to identify and track individuals who have contracted the Coronavirus. During the Obama administration, Greitens was a regular in the Oval Office, according to several news reports, touting his Mission Continues non-profit. He even hosted First Lady Michelle Obama for an ice cream social in Missouri. When Obama pushed for mandatory service in the Americorps as part of a $1billion proposal, Greitens was a regular proponent of this wasteful spending, despite its many longstanding ties to globalist heavyweights.

Also during the Obama years, Greitens served on the Board of Directors for the Franklin Project, an operation run by the Aspen Institute. The Aspen Institute is primarily funded by Bill Gates and George Soros’ Open Society Foundation.

Some of Greitens contemporaries during his time with the Franklin Project?
Barbara Bush, Arianna Huffington, Chelsea Clinton and a laundry list of former Clinton/Obama White House officials, along with noted far-left journalists that harbor the same deranged Trump Derangement Syndrome.

These are the same people who spent President Trump’s first-term organizing illegal coup attempts, publishing an ever-flowing tsunami of fake news, and of course, the Russian Collusion delusion that led to two-failed impeachments.

Remember General Stanley McChrystal? The rogue general who collaborated with the likes of Comey/Brennan/Clapper to take down President Trump? He was another contemporary of Greitens, serving on the Board of the Aspen Institute, which oversaw Greitens efforts at the Franklin Project. McChrystal was also an evangelist for mandatory Americorps service with Greitens.

The Aspen Institute was born out of a desire to push “racial justice” and the myth of “systemic racism” in the streets of South Side Chicago, the political birthplace of Barack and Michelle Obama.

The allegedly “America First” Greitens even served on the Board of Directors of Robin Hood, a NYC charity funded by George Soros. His associate on the BOD of Robin Hood? None other than serial sexual predator Harvey Weinstein. Robin Hood is now currently pushing Common Core and race-based curriculum to demonize White people from groups like the 1619 Project, which President Trump banished from our classrooms.

Prior to his governorship, Greitens was a Davos Fellow.

Davos is a project of the World Economic Forum, well known for their anti-American globalist agenda that has been pushing for a New World or One World Order for nearly 100 years.

Does this resume sound like a conservative, pro-Trump candidate for United States Senate. These are the very people who President Trump fought against during his campaign, while he was in the Oval Office and now as a private citizen. Greitens’ life has been shaped by those who hold the exact opposite worldview of President Trump and his 80million+ loyal supporters.

This was all before Greitens was elected Governor of Missouri under the false pretense of being a Trump ally.

So how did he actually govern after he hoodwinked The Show-Me-State?

He kicked off his term being praised by radical LGBT groups who oppose religious freedom. They actually bragged about having an “ally” in Greitens. These are the same people who not only hate God, but want to send drag queens with histories of sex crimes into our schools to brainwash our children.

It gets worse. Greitens put the Missouri state capitol on a “gun lockdown”, after claiming in campaign ads that “he was a gun guy.” He also continued to mischaracterize his military service during the campaign. Navy Seals he served alongside called him out for his lies, exposing his comparative lack of service or team leads during his time as a Navy Seal,  who his fellow seals claim embellished his service record to deceive voters.

A group of those Navy Seals released an 8-minute documentary exposing Greitens for violating the Navy Seal Ethos, highlighting his service record and frequent use of his background to increase book sales or media appearances.

And in a glaring sign of disrespect for the will of the voters, Greitens moved to appoint Drew Erdmann to a newly created and unelected role of Chief Operation Officer for the State of Missouri. Erdmann spent years as a partner at McKinsey & Company, a management consultant firm known for eroding the rights of citizens through unelected bureaucratic roles like the one Greitens bestowed upon Erdmann. McKinsey & Company’s longtime partner Jeff Skilling founded Enron and we all know what happened there.

In the present, McKinsey & Company has been home to Chelsea Clinton, applauded China for their response to the Coronavirus and promoted aggressive and unconstitutional contact tracing programs.

Are these the kind of people you would appoint as the COO of your state if you were Governor? What does this say about Greitens inner compass? It tells us that his heart is with the globalist elite, not the American people.

Wonder why Greitens is still allowed on social media? He’s a stooge of Big Tech, having taken hundreds of thousands of dollars in campaign contributions from some of Silicon Valley’s most vile free speech haters.

After researching his background and speaking to dozens of people familiar with his true stances, I cannot in good conscience standby as Mr. Greitens deceives the voters of Missouri once again. I cannot allow him to fleece millions of patriots across America of their hard earned money, based on false promises.

Most importantly, I refuse to let someone like Kimberly Guilfoyle, who has immense respect in the America First movement, be roped into the wolf’s lair by dishonest grifters like Eric Greitens.

Especially with this globalist barging into my home state, where he will no doubt lie to my fellow Floridians and friends who do not wish to return to the globalist era of George Bush.

Not on my watch. Not in my state. Not in our movement. Not at the expense of the myriad of accomplishments secured under President Trump. We have enough on our plate fighting the Democrats, mainstream media, deranged Hollywood sycophants and terrorist organizations like BLM and Antifa.

We don’t need more Mitt Romneys or Liz Cheneys or Adam Kinzingers. America First OR NOTHING!

We are done with Globalist Goblins and we refuse Eric Greitens.