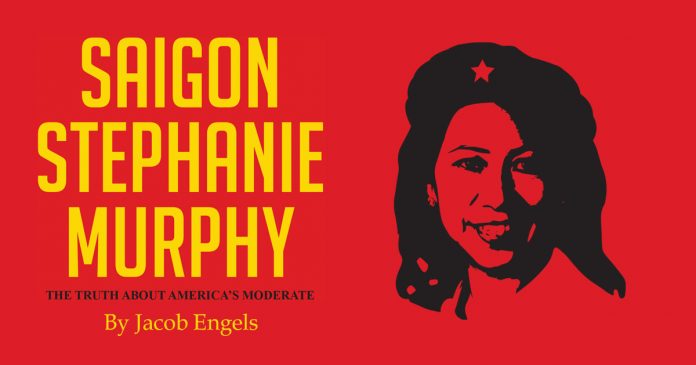 In February of 2020, I published by first book “Saigon Stephanie Murphy: The Truth About America’s Moderate”, predicting that she would seek higher office and eventually run for President of the United States. News reports have confirmed that she will run for United States Senate in Florida against Marco Rubio in 2022.

For years, the Central Florida Post has been sounding the alarm about Congresswoman Stephanie Murphy, warning Floridians and the American people about her Deep State connections and close ties to the Chinese Communist Party.

From her mysterious beginnings in Saigon to her quick rise in politics bolstered by a familial connection to Hillary Clinton, Stephanie Murphy is bad news for the American People. That’s why I published “Saigon Stephanie Murphy: The Truth About America’s Moderate”.

Since its publication, Murphy has sought to reward the Chinese Communist Party by removing tariffs after they released the Coronavirus upon the world, a move that proves her affinity for the CCP. It also shows how she is willing to use her own power to help her husbands business, which produces nearly 100% of their products in CCP controlled factories in China.

In the past year, Murphy has made it clear that she is for an uncontrolled open border, votes with Nancy Pelosi in lockstep, supports the domestic terrorist activity of Black Lives Matter and Antifa.

That’s why I have decided to provide a free online copy of my book, so that voters can understand the clear and present danger of elevating Murphy to the United States Senate. I will be releasing an updated 2nd edition in the coming months.

Below is a chapter guide and way to view the book FOR FREE online.

*GROOMED BY THE DEEP STATE*
We all know that Stephanie Murphy has been tied to the hip of the Deep State since being elected to congress… but how long have they been involved in her life?

*SOCIAL CLIMBER*
What did Stephanie Murphy gain by marrying into to the wealth and power of Full Sail University? How close is her husband’s business to the Chinese Communist Party?

*2016*
She took out a lion of congress when she defeated John Mica. What lead up to the launch of her campaign and why didn’t local media investigate her earnings from Full Sail?

*Steakhouse Stephanie*
As Hurricane Irma ravaged our state, Congresswoman Murphy was anywhere but where she needed to be. During the 2018 election, she attacked journalists with lies about security threats and contemplated abolishing the 2nd Amendment.

*Kneeling For Nancy*
After proclaiming for years that she was a “moderate” who didn’t take orders from Nancy Pelosi, we see the facade crack. From gun rights to open borders, we see less and less of “Moderate Murphy”.

*Ascendancy To The Presidency*
While the idea of President Murphy might sound far fetched, it’s a lot more realistic than you might imagine. She has the family money and love of the press. Can she be stopped or are we looking at a totalitarian Communist as the future leader of the United States of America?