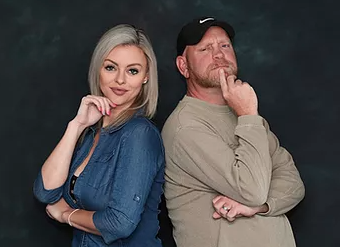 Spawned out of Coronavirus fear mongering and unconstitutional lockdowns and mask mandates, Matt Buff and Brittany Walker decided they were fed up and weren’t going to take it anymore.

Over the past 9 months, we have all had our fair share of frustrations and upset over the unconstitutional orders and mandates imposed upon us by the government as part of their efforts to “slow the spread” of the Coronavirus.

Many have expressed their feelings on social media or in the form of good ole fashion protests in the streets. For Matt Buff and Brittany Walker, their outlet was to hop on the airwaves and broadcast their outrage or insights on what is currently happening right now on local conservative talk radio.

For Buff, who has been a fixture on talk radio in the past and runs a successful marketing company, not being able to see his son play baseball and enjoy life was the biggest motivating factor in jumping back into the realm of radio.

“From the beginning, this was all about controlling our lives with unconstitutional orders and mandates. The government and media never cared about our safety, they only cared about controlling the masses through fear and fascistic fear mongering. I couldn’t just sit there and say nothing,” said Buff.

Walker, who is the Co-Founder of Protect Central Florida, a movement focused on holding government accountable all across Central Florida, knew she had to amplify her voice in an effort to help her fellow citizens remain free and protect their civil liberties.

“They can’t take away our freedoms and infringe on our liberties. Our founding documents are meant to protect us from the type of lockdown tyranny we have seen over the past 9 months. As I have done in the past, I will use my voice and vigor to fight for the citizens as they are under direct assault from the Democrats and leftist media,” explained Walker.

Slowly but surely, they have built a dedicated and sizeable audience since the start of the pandemic. And in the month of February, they have netted one of their biggest gets to date, Roger Stone, who many know as a longtime high-level political operative and decades long close personal confidante to President Donald Trump. Stone was recently issued a full and complete pardon, clearing him from any and all wrongdoing as a result of the Russiagate fueled show trial lead by an Obama appointed judge, corrupt prosecutors and tainted all Democrat DC jury.

They have also nabbed Bryson Gray, an up and coming rapper who has made a name for himself with his collection of chart-topping hits that focus on the America First agenda and our constitutional rights like the right to bear arms and free speech.

Gray’s Youtube channel has racked up millions upon millions views in his meteoric rise.

“The Buff Show” Broadcasts On 94.9FM “The Answer” Live On Mondays, Tuesdays, Thursdays at 7PM and Saturdays at 3PM.

From Spotify to Pandora, and all other major streaming platforms, The Buff Show can be listened to live and on-demand. To learn more, visit THEBUFFSHOW.COM.

Who knows, you might even hear yours truly on-the-air in the weeks to come. Stay tuned and stay safe Central Florida!