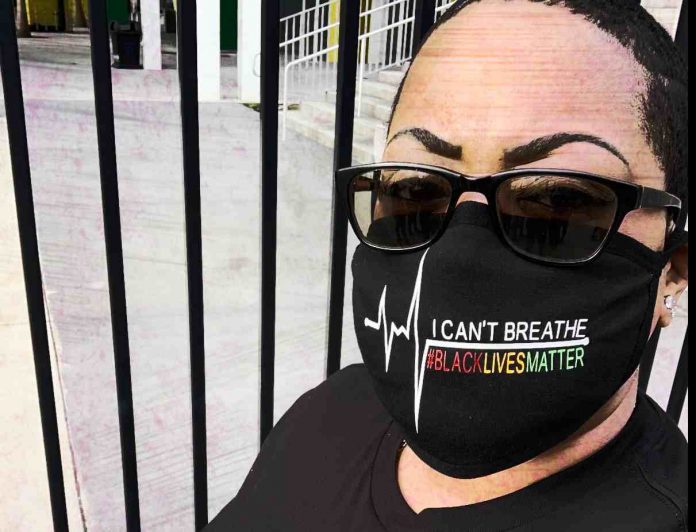 Sheena Rena, who served in various secretarial or assistant roles over the past 10 years in the City of Sanford, was repeatedly written up and reprimanded in the lead up to the City Commission appointing her to the vacancy in District 1 of the City Commission.

An investigation by the Central Florida Post has revealed that Sheena Rena, who was recently appointed as City Commissioner for Sanford’s 1st District, was repeatedly insubordinate and was even barred from interacting with the Mayor and City Commission after violating harassing members of the City Commission.

Rena, a local leader of the Black Lives Matter domestic terrorist organization that was caught on tape taking over the streets of Downtown Sanford while chanting “Black Power,” had a problem following the rules and with taking direction from her superiors.

While the insubordination and violations of the codes of conduct for city employees spans nearly half a decade, the most recent violation occurred in the lead up to the 2018 election cycle. Rena, who at the time was an administrative support specialist making around $23,000 annually, repeatedly engaged in political activity while she was on taxpayer time, which violated four separate city policies.

Records obtained by the Central Florida Post via a public records request confirm this. This means that Rena, who framed herself as a model city employee during her interview before the City Commission who was at the time considering several candidates to fill the District 1 vacancy, lied to the City Commission and voters of Sanford.

In March of 2017, an official memorandum was sent to Rena by City Manager Bonaparte, where Bonaparte referenced a 2016 incident which earned Rena a permanent ban from interacting with the City Commission. The incident in question was a November 2016 Citizens Participation portion of a City Commission meeting, where Rena violated Chapter II. Section 2.71 (F).

“The employee has been guilty of insubordination or of disgraceful conduct,” the letter referencing the official reprimand read. Our sources say that Rena engaged the City Council in an aggressive and inappropriate manner, so much so that City Manager Bonaparte determined her behavior was also “Conduct Unbecoming of a City Employee.”

Another high-ranking source told us that Britton’s worrisome behavior at the meeting was preceded by months of hostile interactions with City Commissioners who were not caving to numerous outlandish demands made by Britton, at that time still a low-level city employee.

Speaking off the record due to the fact that the source is still employed with the City of Sanford and fears retribution from Rena now that she holds the power of a City Commissioner, our source told us the following,

“Ms. Britton got it in her head that she should be in charge and that the City Commission should be taking direction from her on a multitude of issues that she neither had the depth or experience to be commenting on. These were early warning signs of her delusions of grandeur, and quite frankly, of her propensity to lash out at anyone who was in between her and her fantasies of running the show.”

This and her actions at the November 2016 City Commission meeting forced City Manager Bonaparte to forbid Rena from having any further interaction with the City Commission. It was so severe that she was informed that any future problems from Rena could result in further disciplinary action, and most likely termination.

Now you might be asking why Rena was not terminated in 2018 when she was abusing her work resources to meddle in location elections on the taxpayer dime right? It is uncertain why she was allowed to remain employed and we are currently investigating that.

The only positive piece of information in Rena’s file dates all the way back to 2011, when she was rewarded $100 for placing some holiday decorations in the Utilities Department and partaking in some community events.

We understand that many voters, who were robbed of selecting who would fill the District 1 vacancy, will be extremely angry to learn that Rena concealed her troubling history of insubordination and harassment, we are right there with. What is equally as angering is that no City Commissioners or even City Manager Bonaparte took it upon themselves to reveal this during her interview.

Residents of Sanford deserve an explanation from everyone involved, most importantly Ms. Rena who outright lied to the voting public and our elected leaders in the summer of 2020. We also deserve to know why she was not removed in 2018 after Bonaparte promised to remove her if she violated city policies again.

Also concerning is the fact that Britton has gone by nearly a half-dozen aliases according to name change documents submitted to the City of Sanford. Why is this? Criminal records searches involving these aliases returned not even a single parking ticket in all of Britton’s adult life, which was deemed a red flag by our investigator, who theorizes Britton most likely had her record expunged to conceal a criminal past.

It is also important to note that City Manager Norton Bonaparte was the lead in the investigations into Britton. Bonaparte, like Britton, is African American. Here’s why that is important. When we openly criticized Britton’s involvement in the domestic terrorist organization Black Lives Matter, Britton and her allies routinely claimed that any criticism or critque of her political activities or past was “racist” or “white supremacist conspiracy theories.”

Does that mean Britton believes that a fellow person of color like Bonaparte is a white nationalist or racist?

Lastly, we should demand that Rena’s online activity during work hours be monitored and tracked for the public to view or evaluate, given her history of conducting partisan political activities on taxpayer time. That should include her personal computers, cell phones and laptops.

Until we can prove she can be trusted, these internal records prove that Rena is likely abusing her power at a much higher level.

This is an ongoing investigation into Rena that includes numerous other avenues. We remain committed to publishing this series as quickly as possible for the residents of Sanford.