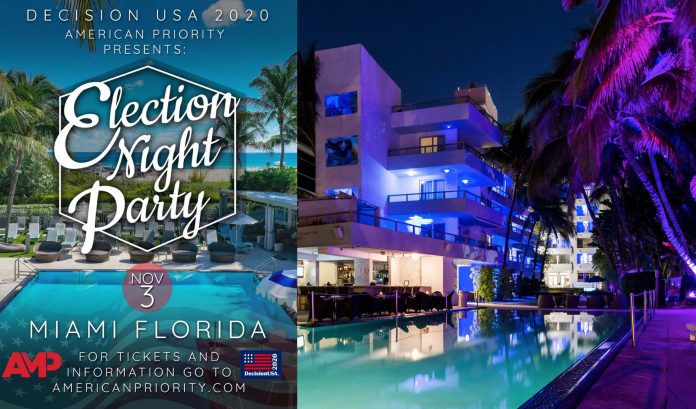 The team behind the recent American Priority Festival 2020 at Trump National Doral, which snagged some most popular icons of the MAGA movement, are still in Florida and planning an election night party in Miami, Beach on November 3rd.

American Priority 2020 drew hundreds of conservatives from around the nation, lasting from October 8th-11th. The American Priority “Election Night Party” is also expected to draw a sizeable attendance from activists and leaders in the MAGA movement alike.

High profile celebrities are rumored to be in attendance from TV, sports, and politics.

Hosted at Miami Beach’s Sagamore Hotel, the party will take place on the pool deck and feature cabanas and bungalows for guests. Group rates for the AMP Election Night Party are available.

Bryson Gray, who performed during American Priority 2020 at Trump National Doral, will DJ the party. Gray, a pro-Trump rapper, has amassed a sizeable following online. His recent release, Gun Totin’ Patriot, is about to surpass 700,000 views on Youtube alone.

Tom Shadilay, one of the leader organizers behind American Priority, also said that they will be one of a dozen or more satellite locations for election night coverage from DecisionUSA 2020.

Featured hosts for the election night coverage include noted historian Larry Schweikart, investigative reporter and Founder of UncoverDC Tracey Beanz and pollster Richard Baris (who was the only one to call Trump’s victory in 2016.)

“We will be conducting interviews with attendees, dropping in on other parties across the nation and doing our best to provide up-to-the-minute election results and coverage for our guests. Not only will you be having a great time, but you will also be some of the first to know exactly what is going on as polls close.”

Fifty States Vodka, an American made product that is gluten free and non-GMO will be the drink sponsor for the event.

Alex Phillips, the Founder of American Priority, told the Central Florida Post that “no patriot wants to miss this.”

AMP is so excited to be hosting an oceanfront poolside election night event in beautiful South Beach Miami, Florida on November 3rd! Miami is like a second home to AMP and we can’t wait to celebrate the re-election of President Donald Trump with all of our favorite patriots. In true AMP fashion we will be featuring live musical performances, including MAGA rapper Bryson Gray, and have a few VERY special guests confirmed. No Florida patriot wants to miss this party.

You may purchase tickets here and register for your room here. Ask for the AMP Election Night Party group rate.