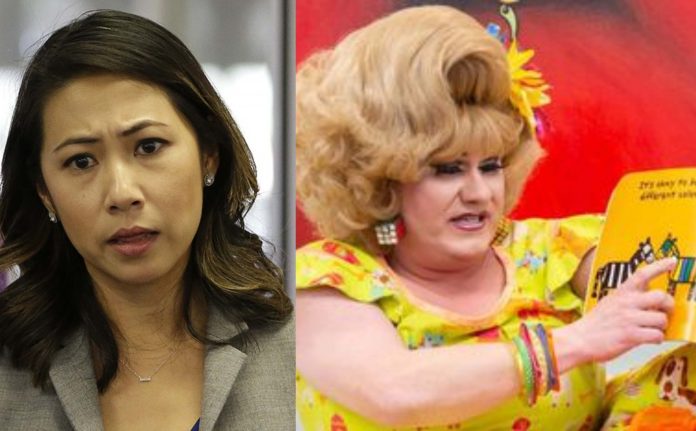 Stephanie Murphy, who claims she is one of the most “Moderate” Democrat members of congress, is hosting a “Drag Queen Bingo” with a Drag Queen tied to depraved “Drag Queen Story Hour”.

Floridians have come to understand that Congresswoman Stephanie Murphy is anything but the moderate Democrat she has claimed to be since narrowly winning election in 2016. Voting with Nancy Pelosi nearly 100% of the time, including casting her vote to impeach President Trump based entirely off the phony Clinton-funded Steele Dossier, Mrs. Murphy assumes the role of a middle-of-the-road deal maker every two years to trick voters into giving her another term.

Murphy, who famously pushed to end tariffs on China after they unleashed the Coronavirus pandemic on the United States, has also used her power as a member of congress to strip Americans of the constitutionally protected 2nd Amendment rights and has fought to prioritize the needs of illegal immigrants over our veterans and seniors.

This journalist has chronicled her deceit extensively at The Gateway Pundit and Central Florida Post, also having published the 2020 book “Saigon Stephanie – The Truth About America’s Moderate”, which details her ties to the Chinese Communist Party and just how far-left this self-proclaimed “moderate” really is.

Across America, several DQSH hosts have been exposed as child predators or perverts with a litany of previous sex crime charges or convictions. The events themselves seek to sexual children and impart on them details related to sexual acts and other inappropriate content not meant for children.

So, one has to wonder how exactly Stephanie Murphy can continue to claim her status as a “moderate”, when she is in fact hosting and promoting a participant in “Drag Queen Story Hour”, even requesting anywhere from $500 to $2500 to join the Zoom call. Not only is she signaling her support for the depraved activities of DQSH, she is looking to raise campaign cash.

The fact that we as a society have allowed Drag Queen Story Hour to infect our pop-culture should have us all ashamed. As for Congresswoman Stephanie Murphy, she should be ashamed for being a willing participant and normalizing this. Shame on her.