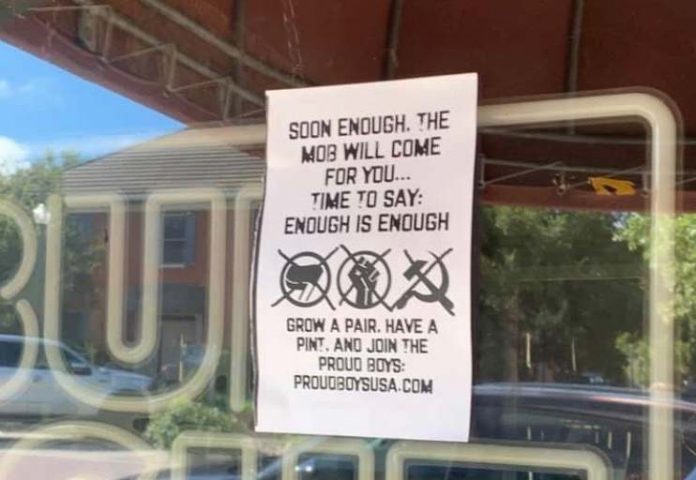 Lua Hancock, Stetson University’s Vice President of Campus Life and Student Success, has sent out a mass email to faculty and students demonizing the Proud Boys for exercising their free speech rights in DeLand, Florida, where the campus is located.

According to photos circulating on social media, members of the Florida chapter of the Proud Boys, a pro-west men’s fraternal group, placed and distributed posters calling out the BLM mob and dangerous anti-American political ideologies that have taken over the Democrat Party. The fliers, a completely legal form of free speech, read as follows.

“Soon Enough The Mob Will Come For You. Time To Say: ENOUGH IS ENOUGH.”

Displayed beneath the text were images related to the domestic terrorist group Antifa, BLM, and Communism… all crossed out before encouraging people to sign up to become a member at proudboysusa.com.

We have been in touch with the DeLand Police Department who has assured us that they are aware of the posting of these flyers and are monitoring the situation.  Our community stands against hate based propaganda and the fear it aims to instill in our community.  Please bring any hate incidents or concerns to our community by contacting public safety, the DeLand Police or using reportit.stetson.edu.

In her email, Lua Hancock called the fliers hate based propaganda and asked people to report anyone involved with the fliers to the police or a tipline set up by Stetson University. While it is disheartening, it’s not surprising that yet another “academic” thinks it’s appropriate to encourage Gestapo like tactics and mob pressure against anyone who advocates for traditional American values and opposition to deadly anti-American ideals. According to the Proud Boys Florida Chapter President Tyler Ziolkowski, the SPLC is currently being sued by the Proud Boys after falsely labeling the men’s fraternal group as a hate group.

“What exactly is wrong with loving your country and believing that the WEST IS THE BEST? I’d like to know why Ms. Hancock hates America, free expression, Western values? We’d gladly buy her a ticket to whatever communist or socialist shithole she’d like to relocate, since she believes America is so awful.”

For those that are unaware, the Proud Boys are a multi-racial group led by an Afro-Cuban whose family fled to America in order to escape Fidel Castro’s brutal communist regime. The group has been constantly slandered and maligned for standing up for Western values since their founding shortly before the 2016 elections.

“For Lua Hancock to use her position at Stetson University to advocate for Marxism, Communism and domestic terrorist groups like Antifa is deeply disturbing. We wonder why so many of our young people have become infected with rage and unwarranted hate for America, but people like Lua Hancock serve a reminder of why colleges and universities should investigated for indoctrinating our youth. The ideals of freedom and liberty will not be snuffed out, no matter how hard treasonous defectors like Hancock try,” said Proud Boys Chairman Enrique.

Anyone willing to communicate their unhappiness with Lua Hancock, may email her here at lhancock@stetson.edu.