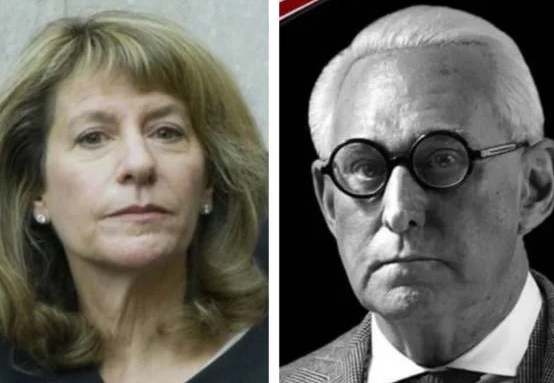 The story appeared out of nowhere as means to silence the longtime Trump advisor in the months leading up to his trial? Was it based on facts or fiction?

When Hillary Clinton’s former Lawyer Aaron Zelinsky testified via Skype to the House Judiciary Committee last week he recycled one of the most stunning twists in the story of the prosecution of Roger Stone, Zelinsky, among the dirtiest of Mueller’s dirty cops, said Stone deserved a longer sentence than the 40 months issued by Judge Amy Berman Jackson because he said “Stone threatened a federal judge.”

But did he? You won’t find the truth in the fake news media feeding frenzy that feasted off this story in February of 2019.

Under siege by CNN, MSNBC, New York Times, the Washington Post, The Daily Beast, and The Huffington Post with a veritable tsunami of stories predicting he would be charged by Mueller for Russian Collusion, conspiring with Wikileaks on the timing of their publication of the Hillary Clinton-related material the release, advance knowledge and involvement in the theft of John Podesta’s e-mails, Conspiracy Against the United States, violation of the Foreign Contribution Ban in laundering of  millions in Russian cash and worse. Some of these stories illegally leaked from the special counsel’s office. How else could CNN know that the Mueller hit squad had obtained Stone’s Bank and IRS records? How else did Reuters know the name of the parade of current and former Stone associates dragged before the grand jury prior to the day of their appearance? How did the Washington Post know that Mueller subpoenaed the Trump Organization’s phone records to track the candidates 2016 calls with Stone?

Using his social media platforms, occasional hits on FOX News or OAN, his blog the Stone Cold Truth and his daily late afternoon show at Infowars, and a barrage of outgoing emails to highly developed lists of stakeholders in the media and political world, Stone counterpunched as best as possible against this torrent of lies and vituperation. A one man truth squad, Stone punched back amazing effectiveness against the monolith of corporate media being spoon-fed by Mueller’s henchmen. Some of the dissections of obvious Washington Post and New York Times hit pieces, were turned around in hours and blast e-mailed to the political cognoscenti, remain classics of the genre.

The over-the-top FBI raid on his home to arrest him gave Stone greater media access and the sympathy of those on the right who had never particularly liked him. It was clear that prosecutors had to silence him. Shortly after Sara Murray of CNN e-mailed Stone and asked what he was going to do when “Judge Jackson silences you,” which Stone immediately posted online, their method of doing so would become clear, inadvertently handed to them by Stone himself.

On February 18, 2019, Stone posted a graphic of Judge Jackson on his Instagram feed that had in the upper left corner the logo of the organization that created it, Corruption Central. Someone at Buzzfeed who has never held a rifle with a scope in his or her life, decided the logo looked like a crosshair on a rifle and then accused Stone of threatening to kill the Judge.

Lost in the immediate fake news feeding frenzy is the fact that this same logo appears in the same place on other images of individuals Corruption Central had publicly criticized, including Mark Zuckerberg and Kamala Harris. By the time the fake news media conflagration was over, this story became “Roger Stone posted a picture of the Judge with Crosshairs over her face”. Stone insisted on his Infowars show that it wasn’t a crosshairs, which of course it wasn’t, but he was pissing into a tidal wave. Summonsed to Washington by the media-whipped-up Judge Amy Berman Jackson to explain this matter on the stand and under withering and accusatory cross-examination by both the Judge and Assistant US Attorney Jonathan Kravis (formerly a White House lawyer for Barack Obama with a long reputation for the abuse of his power as a prosecutor particularly in his investigation of the Presidential campaign of Congressman Ron Paul-), Stone said “I apologize to the Court for posting an image that was open to misinterpretation. It was not my intention to threaten anyone”.

Stone admitted his own “stupidity” in posting the image but his abject apology did not satisfy Jackson, who had also never held a rifle with a scope in her hands and wouldn’t know a gun’s sighting crosshairs if she fell over one, but kept insisting it was exactly a point which Stone continued to deny, correctly pointing out that the logo was based on a Celtic cross as confirmed later by the graphic artist who created it.  Jackson tried to insist that there was a discrepancy between his explanation on the stand and what he had said on Infowars, but there wasn’t. Prosecutors wanted Stone jailed, but Jackson knew she had overplayed her hand by throwing Paul Manfort into solitary confinement prior to his conviction of any crime, which did not sit well with other Judges in the DC circuit who had a higher regard for the Constitution. Stone left the Courthouse with his freedom, but he was hobbled by a constitutionally questionable gag order. Now the fake news deconstruction of Stone could really begin.

Stone did seem shocked that his own lawyer Bruce Rogow, who is known more as an appellate lawyer than a criminal defense attorney, called his own clients actions “reprehensible” instead of bolstering Stone’s adamant denial.

Among those who just flatly reported the image was a “crosshairs” despite testimony to the contrary were CNBC, MSNBC, The BBC, The New York Times, The Washington Post and POLITICO. None of them quoted the insistence by Stone that the image was not a crosshair and other denials wrapped in Stone’s apology. Nor of course did any of them pick up the story of the graphic artist who created the image.

Mueller’s team then subpoenaed three young volunteers who were helping Stone’s defense efforts and dragged them before the grand jury in Washington badgering them to falsely “admit “that they had overheard Stone threaten the Judge.” All three refused to lie. It didn’t matter.

The prosecutors would dredge up this allegation “Stone threatened a federal Judge” again and again as if it was an undisputed fact in their efforts to have him  jailed during trial and again in their contrived attempt to get a 7-9 year sentence in the first sentencing memo that was so outrageous in it’s overreach that senior officials at DOJ criticized  it and issued a clarification memo to the court. Roger Stone was neither charged nor convicted of threatening a federal judge.

Judge Jackson herself would repeat the big lie in her mentally unhinged rant upon sentencing, when she said Stone had engaged in “threatening conduct against the court and the prosecutors” , one of the many falsehoods and wacky assertions  by Jackson, which sources tell CFP will be the basis for a formal complaint by Stone to remove Jackson from the bench because she has a “mental disability”.

Lost in this maelstrom are the words Stone posted on Instagram that day. “Through legal trickery Deep State hitman Robert Mueller has guaranteed that my upcoming show trial is before Judge Amy Berman Jackson, an Obama appointed Judge who dismissed the Benghazi charges against Hillary Clinton and incarcerated Paul Manafort prior to his conviction for any crime” #fixisin.

In retrospect Stone got this part exactly right. The “fix” was indeed in.