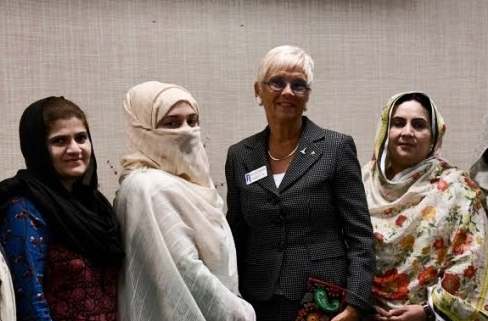 Jan Face Glassman, the current State Committeewoman for the Collier County GOP, is a lot less pro-Trump and pro-America than she would like you to believe.

The Central Florida Post has been made aware that a GOP candidate in Southwest Florida is concealing important information from primary voters with just under two-months before voters head to the polls.

Jan Face Glassman, who allegedly spends most of her time at a residence in New Hampshire rather than in our beautiful Sunshine State, has been endorsed by terror-linked State Attorney Amira Dajani Fox, who we exposed in 2018 for her links to radical Islam and even terrorist linked propaganda. Given the growing danger of Radical Islam, which has moved from far away places to American soil, voters should not only be concerned but also frightened about what Amira Dajani Fox sees in Jan Face Glassman.

Glassman claims to have integrity and count this as one of her strengths on her campaign website, but how honorable and righteous is it to associate with someone like Amira Dajani Fox.

Her family has deep ties to the extremely anti-semitic PLO (Palenstinian Liberation Organization), with her Uncle being one of the co-founders. Her father is also a known bigot who hates the Jewish people and Israel, our only ally in the Middle East.

From our 2018 investigation, so that readers can be refreshed about just who Amira Dajani Fox is. What does she see in Jan Face Glassman and why does Glassman continue to tout and celebrate her endorsement?

Dajani’s father penned a book titled “From Palestine to America” that included passages full of commentary viewed by many to be anti-Semitic, anti-American, and anti-Christian, and anti-Israel.

It included chapters where he expressed anger at the “Jewish Lobby” and the “Christian Right.” Dajani’s father also championed war against Israel and accused Jews of using Arabs as human shields. Amira Dajani has refused to clarify whether or not she holds the same opinions of her father, who dedicated the book to her and has donated $1,000 to her campaign.

Dajani currently serves as a top assistant state attorney to outgoing State Attorney Stephen Russell, who forwarded what he claims was an anonymous tip about Crowley’s participation in a raffle at a campaign event.

Yes, you read that correctly… Amira Dajani’s boss got the ball rolling on a politically motivated charge against her opponent.

Dajani refuses to denounce the adoption of Sharia Law in America and continues to refer to herself as Amira Fox, masking her heritage, which she should not be ashamed of unless she is worried that GOP voters will become unsettled about her ties to a den of Jew haters.

On top of this, Glassman is a rabid Never Trumper, having donated big bucks to Mitt Romney, thousands over the years. She even donated to a Republican pro-choice organization as well. Even worse? She was part of the Never Trump movement and was quoted as saying she was “disappointed that Trump was running” and that he “wasn’t taking it seriously.”

“He’s the only person I don’t see taking it totally seriously,” said Jan Glassman, a Republican activist. “I’m disappointed that he’s running, if he’s going to act like this is ‘The Apprentice.’ This is real life.”

Glassman is being backed in a big way by the GOP establishment in Southwest Florida, the same establishment cronies and powerbrokers who wanted to deny candidate Trump the nomination and then conspired with Democrats to stop him from becoming President of the United States. Vote Glassman, OR ELSE is the sentiment that several Collier County Republicans have confided in this publication privately for fear of retribution if they went public with their upset and fear.

JoAnn DeBartolo, her opponent in the August primary, seems like a far more viable candidate for the MAGA movement in Collier County. DeBartolo was the 2016 Chairwoman of Collier County for Trump Campaign and helped Collier County earn one of the largest turnouts for President Trump in all of Florida’s 67 counties.

She was recently backed by patriot Roger Stone, President Trump’s longest serving political advisor and close friend who has counseled Trump for nearly four decades. After earning a huge win for President Trump in 2016, DeBartolo has founded The Patriots for Trump Club and organized several fundraisers and events to help bolster the legal defense fund for Trump advisor Roger Stone.

Alternatively, we have not seen an apology from Jan Face Glassman for her hateful attacks on President Trump or her involvement and financial support for an organization that pushes pro-choice policies that contribute to the butchering of innocent babies.

While we are not keen on telling our readers what to do or how to vote… we want to finish with these final questions that we believe will help you consider where your vote belongs in this race and others where similar dynamics are at play.

Does Jan Face Glassman support the rabidly anti-jewish Palestinian Liberation Organization? If not, why hasn’t she denounced and denied the endorsement from Amira Dajani Fox?

How long has Jan Face Glassman evangelized for the pro-choice movement and how many babies have we lost dues to her providing both financial and political assistance to pro-choice organizations?

Why hasn’t she apologized for her hateful remarks about President Trump and does she still hold those viewpoints?

Why hasn’t she apologized for contributing so much to Mitt Romney’s failed campaigns that led to another term for Barack Hussein Obama and a march towards socialism in the United States?

It is often said that who you surround yourself with says volumes about your character. Jan Face Glassman associates with a woman with connections to terror-linked groups and people.

JoAnn DeBartolo stands shoulder to shoulder with President Trump and his allies like Roger Stone, who refused to bear false witness against our beloved President who is doing God’s work in restoring our nation.

Who would you pick?