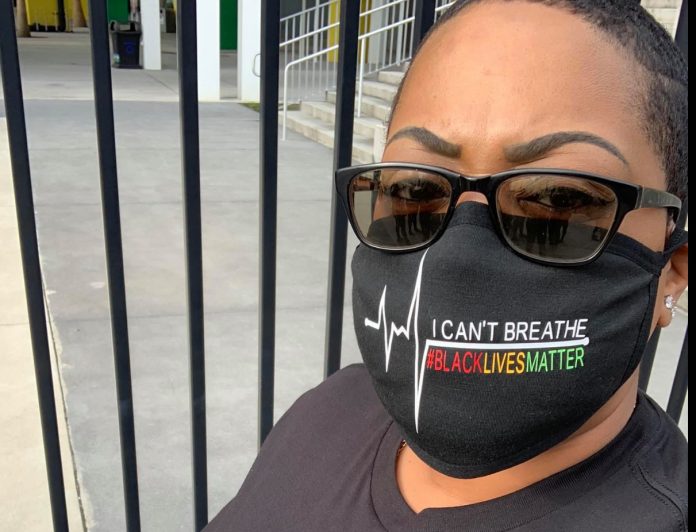 Sources are telling the Central Florida Post that the Sanford City Commission is going to pick Sheena Rena Britton, a low level city employee who is heavily involved in the Black Lives Matter movement.

The residents of Sanford’s 1st district are worried that the City Commission is poised to pick a leader of the local Black Lives Matter movement to fill the vacancy in Sanford’s 1 District, which includes all of the Historic District and all Downtown businesses.

Sheena Rena Britton has been heavily involved in the Black Lives Matter protests that have disrupted commerce and polite society in Sanford over the past few weeks. Britton, who claims to “love Sanford” in her application submitted to the city commission to be considered for the appointment, doesn’t seem to care about the negative economic impacts businesses across America face from the rowdy and often violent BLM “protests.”

Her Facebook page is littered with posts supporting the movement. She has refused to condemn domestic terrorist activity exhibited by both BLM and Antifa. They have rioted, looted, burned, murdered. But for Britton, it’s just a “peaceful protest” that needs to continue until everything she and others deem offensive or racist is canceled or erased from American culture.

It’s odd to learn that the City Commission, which leans Republican, is even considering a radical BLM activist for this vacancy. Black Lives Matter’s rallying cry is to defund police departments and even abolish local governments. Imagine the type of “representation” the City of Sanford would get from Britton. Statues torn down, endless protests that are unpermitted and sapp the entire police force, constant race baiting motions at City Commission meetings.

Ironically, the Chief of Police in Sanford marched alongside Britton’s allies while they chanted BLACK POWER, as we reported weeks ago. The group shut down Downtown Sanford, was unpermitted, and not required to reimburse taxpayers for the use of police resources (the entire police force was distracted by this march for several hours).

Sanford city officials have confirmed that they will never require a permit from BLM protesters, while anyone else wanting to shut down public roadways has to be permitted and pay fees to the city, which often include hiring police officers. The Sanford Police Department has yet to provide the Central Florida Post with the total cost to taxpayers resulting from multiple BLM demonstrations over the past month.

The Sanford City Commission should reconsider their plans to install Ms. Britton in the District 1 seat. Not only is it unwise, it’s also flat out stupid. Appeasing the BLM mob by appointing one of their leaders will not stop the disruption or erasure of our culture.

Take a stand and JUST SAY NO.