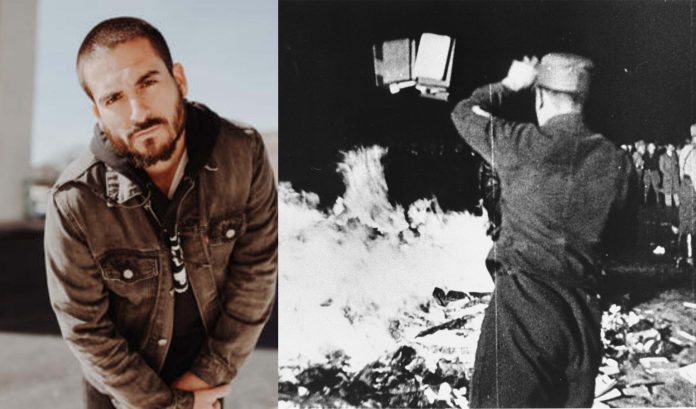 Vidal also goes on to say that white people need to “silence” themselves before actually consuming literature by people of color.

Juan Vidal, a radical alt-left writer who contributes to deranged anti-Trump websites like The Daily Beast and Rolling Stone, published an article on NPR’s website demanding that white people “decolonize” their bookshelves by removing all books written by white people and requiring they be replaced with books that are written by people of color.

In removing those books, Vidal leaves no explanation what to do with them, but we all know what he means. This radical left “anti-fascist” writer is advocating for modern day book burning of content from a specific racial or ethnic group, the same exact thing that Hitler and his Minister of Propaganda Joseph Goebbels ordered done during the Third Reich, where “literary garbage” and books of “un-German” origin were set ablaze.

If you are white, take a moment to examine your bookshelf. What do you see? What books and authors have you allowed to influence your worldview, and how you process the issues of racism and prejudice toward the disenfranchised? Have you considered that, if you identify as white and read only the work of white authors, you are in some ways listening to an extension of your own voice on repeat?

Vidal also goes on to say that white people need to “silence” themselves before actually consuming literature by people of color.

Anti-racist books will only do a person good if they silence themselves first and enter into the reading — provided they care enough to do so.

The modern left has made it clear that they will stop at nothing and let no boundaries be broken or crossed in their lust for power and total control over the American people. Adolf Hitler and his National Socialists felt the same way. To understand their similarities, consume the below quote from Minister of Propaganda Joseph Goebbels speech at one of the most iconic book burnings in Nazi Germany, hosted by the German Students Union in Berlin’s Opera Square.

Revolutions that are genuine stop at no boundaries. No area must remain untouched. Just as it revolutionizes people it also revolutionizes things. “Therefore, you are doing the right thing as you, at this midnight hour, surrender to the flames the evil spirit of the past. There the intellectual basis of the November Republic is crushed to the ground. But from the rubble will arise victoriously the Phoenix of a new spirit, a spirit that we carry forth, that we nourish and to which we give decisive weight.

19th century German-jewish poet Heinrich Heinie, who was the victim of book burnings of his and others work in his era, encapsulated what happens when you start burning books.

“Where they burn books, they will also ultimately burn people.”