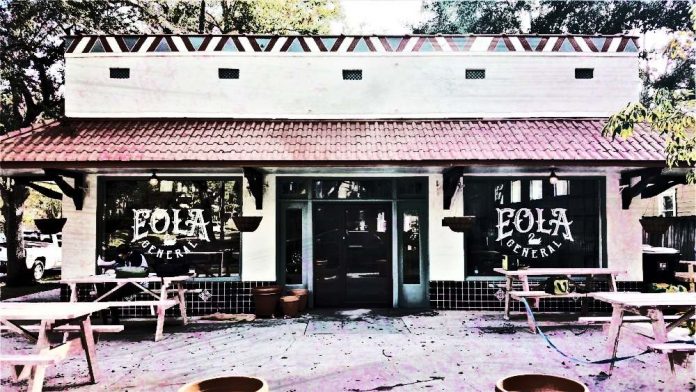 Days after Eola General ousted a vendor for an offensive tweet made years ago, the Central Florida Post has learned that owner Shaun Ryan Noonan has advocated political violence in the past.

Ever since protests over George Floyld’s death have brought commerce and normalcy to a screeching halt in Orlando, the local progressive community has heaped praise on Eola General and it’s partner businesses for their support of the Black Lives Matter and Antifa fueled protests that have lead to rioting and looting in Orlando.

Crucial emergency services have been sidelined and hampered by the mob shutting down roadways in Downtown Orlando and several local highways and intersate. The “peaceful” protesters have also rioted near the Mall at Millenia, leading to the destruction of several businesses including a jewelry store and several restaurants.

Across the nation, cities have been burned. Law enforcement officers and business owners have been murdered in cold blood by “peaceful” protesters. BLM has openly collaborated with Antifa, a domestic terrorist organization known for their use of violence and intimidation against their political opponents.

Despite these simple facts, Eola General has given their support to the protests in the form of distributing free food and supplies. On June 4th, they announced that they will be donating 10% of their earnings to the efforts that are crippling already struggling businesses in Downtown Orlando. They also confirmed that they are donating $200 daily to “local bail funds” for as long as the protests persist.

When we attempted to get clarification from Mattew Uva, who an employee told us to contact to request comment, Uva was not happy. When pressed about whether or not they were evaluating who the bail money was going to and if their financial assistance was benefitting rioters or looters, he became incensed.

“That’s not on us and we don’t talk to blogs, we only speak with traditional media.”

Uva is one of the vendors and partners at Eola General and like the owner Shaun Ryan Noonan, Uva has celebrated political violence on his Facebook page before. In 2017, as Antifa destroyed the nation’s capitol during President Trump’s inauguration, Uva updated his cover photo to a picture of a limousine set ablaze by members of Antifa. Subsequent news reports would later reveal that the limo belonged to an immigrant trying to put food on the table and build a small business.

He doesn’t care if the bail money frees violent criminals and clearly supports the destructive and illegal acts of Antifa.

After hitting a dead end with Uva, we decided to reach out to owner Shaun Ryan Noonan to see if there was potentially a different side or attitude about the bail fund and domestic terrorist groups like Antifa rioting and looting across America. Noonan ended up being an even more ardent supporter of the domestic terrorist group and political violence.

He responded with memes claiming Antifa is a made up thing by crazy white women. Eventually he said “BLACK LIVES MATTER, FREE PEACEFUL PROTESTERS.” We all know that the progressive left, of which Noonan and Uva are part of, support the “symbolism” of violence and destruction we are enduring at the hands of deranged BLM and Antifa protestors.

Noonan’s FB page includes memes calling for people to be murdered if they don’t support welfare programs or government assistance and calling for pro Second Amendment activists be “sent to an island.”

Another meme uses images from Godzilla to shame people who protested the government shutdowns, despite Noonan now funding and offering support to protests that serve his political interests.

It is unclear if Eola General is being looked into by federal authorities, who have signaled that they will be treating groups like Antifa and others aiding these violent protests as domestic terrorists.

This is a breaking story and will be updated as soon as we know more.