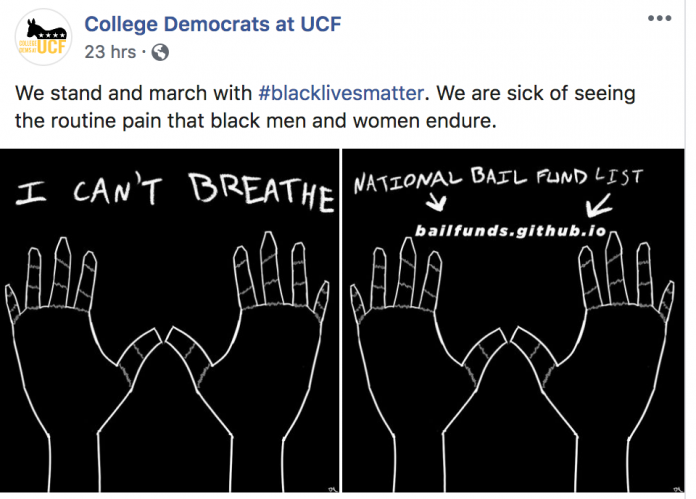 The modern Democrat party has lost all grip of reality since the election of Donald Trump in 2016. So, I guess it should come as no surprise to see their youth auxiliary organization urging people to donate money to bail out violent Antifa domestic terrorists who have been arrested in connection with deadly riots and looting across America.

This means that an organization provided funding by a public university is openly advocating others to give financial assistance to domestic terrorists, which is a crime. Attorney General Bill Barr has already started raiding the homes of Antifa leaders and arresting nests of Antifa across the United States, with President Trump promising a full military response if state and local leaders are unable or unwilling to stop the violence.

The UCF College Democrats have made waves in the past. Just a few years ago they stopped participating in the long held annual remembrance ceremony for 9/11 victims that used to be co-organized with the UCF College Republicans, stating that a meeting with an anti-2amendement group was more important.

President Trump should look at defunding public universities who allow taxpayer dollars be used to support school clubs like the UCF College Democrats who openly advocate for domestic terrorists.

We have reached out to UCF’s communications specialist and will update this story if they provide any comment.