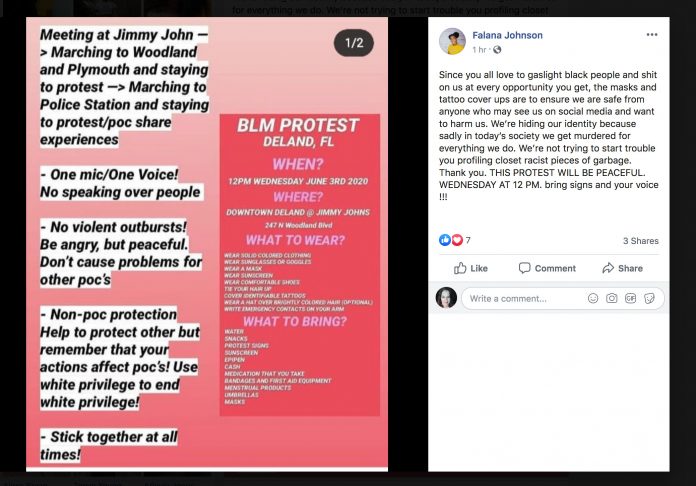 Falana Johnson, a local activist and failed “culinary expert” is reportedly teaming up with domestic terrorist organization Antifa to hold a protest in Downtown Deland tomorrow at noon.

The Central Florida Post has confirmed through multiple sources in Deland, both citizens and law enforcement officers, that Black Lives Matter is teaming up with domestic terrorist organization Antifa to protest in the streets of Downtown Deland tomorrow at 12pm.

Falana Johnson, who appears to be the one who is organizing the event, is believed to have relationships with members of Antifa and has coordinated with them in the past. Antifa and Black Lives Matter have set off a rash of violence across the United States over the past week, leaving cities burning and business destroyed or looted by the rioters. Several law enforcement officers have and citizens have been killed by the domestic terrorists, with hundreds of innocent people also brutally beaten by members of Antifa and Black Lives Matter.

According to Johnson’s Facebook account, which shared a graphic promoting the event,  she is instructing people to conceal not only their faces but also tattoos in an effort to prevent police from identifying them. The poster directs people to gather inside the Jimmy John’s at 247 N. Woodland Boulevard.

Protesters are likely to riot and loot as they have in other Central Florida communities during similar gatherings. The proprietor of the Woodland Boulevard Jimmy John’s told CFP that their business “wants nothing to do with the protest” and that they would not facilitate any type of gatherings at their location or on their property.

Up until two weeks ago, Johnson was working in some capacity at the Sanford location of Keke’s Breakfast Cafe, where she claims to have been a line cook. The manager of the location confirmed to us that Johnson suddenly became a “no call, no show” and has not returned to work since.

Just this afternoon she shared a post from someone asking “how peaceful would you be if (George Lloyd) was your son,” implying that violence is an option at tomorrow’s protest.

This coincides with an increased amount of activity on her social media accounts, which are chock full of postings promoting Black Lives Matter, Antifa and the way they are destroying communities across America. It is still unknown if Johnson quit her job to become a paid agitator.

Deland Police and the Volusia County Sheriff’s office are aware of the potential for rioting and looting as a result of the Antifa-backed Black Lives Matter protest. It is unclear if they will stand down as some law enforcement agencies have due to the depraved and deranged behavior that has become commonplace during these riots.

We will continue to update our readers as soon as we know more. Our suggestion is to stay indoors tomorrow afternoon and out of Downtown Deland.