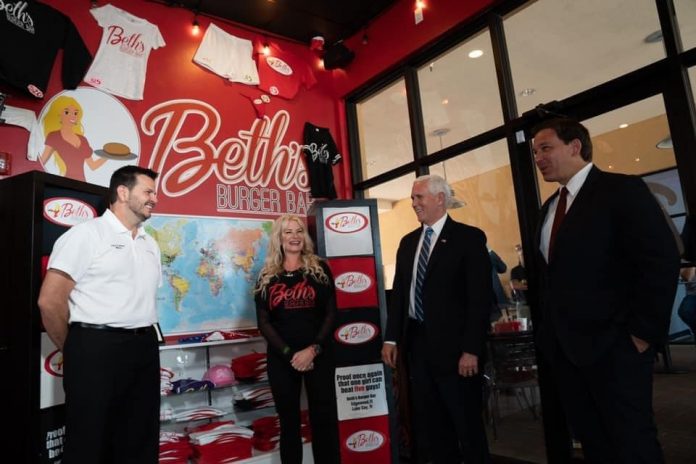 Local progressives are now using this visit to attack the the bar and it’s owner Beth Steele, according to screenshots gathered from the business social media accounts.

Last week, VP Mike Pence was in the Sunshine State for a series of meetings with Florida Governor Ron DeSantis regarding the state’s response to Coronavirus and Florida’s next phase of reopening. They gathered at Rosen Shingle Creek, one of the regions largest hotels, where they participated in a panel with billionaire hotelier and philanthropist Harris Rosen, who has pushed to reopen Florida’s economy and put people back to work.

After this meeting, VP Pence and Governor DeSantis stopped over to Beth’s Burger Bar, an extremely popular eatery in the Central Florida area, to grab lunch and meet with owner Beth Steele and her employees. Steele, who has kept her staff at all three of her locations during the pandemic, is well regarded by business leaders and customers for providing Central Floridians with a great place to work and eat.

Following all CDC guidelines and running at 25% capacity, the visit was neither improper or unsafe. Health officials screened all those present and maintained an atmosphere that was both safe and secure for Florida’s Governor and our Vice President.

Local progressives are now using this visit to attack the the bar and it’s owner Beth Steele, according to screenshots gathered from the business social media accounts. The comments range from wishing Coronavirus on everyone present during the lunch to suggesting that Steele should have instructed her employees to “poison” the Vice President. A post Shane Douglas, a local gay Republican activist detailing the hateful outbursts, first uploaded on Facebook, has now been shared over 2,000 times.

Pagano is encouraging people to show their support for Beth’s Burger Bar by frequenting on of her three locations and to leave positive reviews or comments to outweigh the hateful left’s blitzkrieg on the businesses digital media accounts.

This is par for the course when it comes to how deranged and unhinged modern day progressives are about the success of President Trump and the desire of elected Republican leaders wanting to get America back to work in order to restore the historic economic gains made under Trump’s first term. Shame on them.