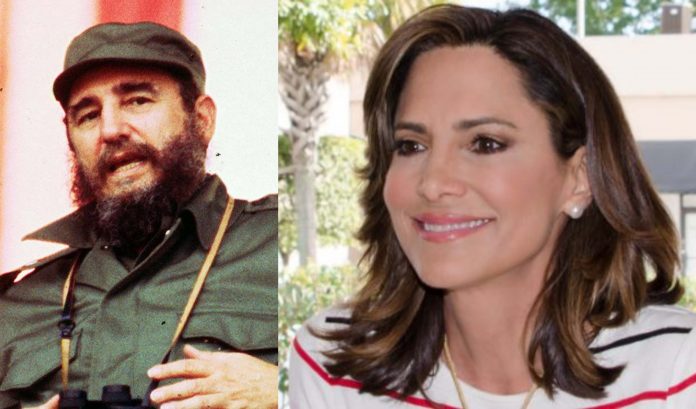 Salazar, who secured the GOP nomination in 2018 and went on to lose against Donna Shalala in Miami’s 27 congressional district, appeared impassioned and upset about Sanders fondness of Castro’s murderous Communist regime. However, according to Miami New Times, Salazar’s outrage is downright manufactured and pretty hypocritical.

So here’s the truth about Castro:

-He imprisoned & enslaved homosexuals
-He murdered thousands of innocent people
-He forced thousands to flee, many by rafts. Including my parents.

Less than two years ago, Maria Elvira Salazar, a former TV journalist and current Republican candidate for Congress in Miami, said her words were being taken out of context when her opponents pulled up an old interview she conducted with Fidel Castro during which she called the dictator “comandante” and “un revolucionario por excelencia” — an honorific for “commander” and a compliment saying Castro was an exceptional revolutionary.

Referring to Castro in such endearing terms is just about the last thing you want people to hear, especially in this South Florida congressional seat that is heavily populated with Cuban exiles who have lost family and friends to Castro’s authoritarian dictatorship.

To make matters worse, CFP has discovered a video uploaded on Twitter showing Salazar, who spent decades as a TV journalist, interviewing the nephew of war criminal Che Guevara, a close ally and high-level participant in Castro’s murderous regime and rise to power.

Can you imagine being “honored and privileged” to be in the presence of the DNA of Lenin or Hitler?

And if those to displays weren’t enough to make you sick to your stomach, news reports from Univision in 2013 reveal that she chastised anti-Castro activists for opposing the release of Castro-linked spies during the Obama administration.

For Salazar to act like she is upset or offended by Sanders’ pro-Castro stance is a stunning act of hypocrisy. Yes, people can change and sometimes that change can be dramatic. However, the recent article from the Miami New Times Jerry Iannelli that we referenced earlier proves the exact opposite. Salazar threatened legal action against one of her GOP primary opponents in 2018 for airing aids showcasing her kind interactions with Castro.

The primary elections take place in late August in the state of Florida, where Salazar will face three other contenders, including Latinos for Trump state director Enrique Tarrio.