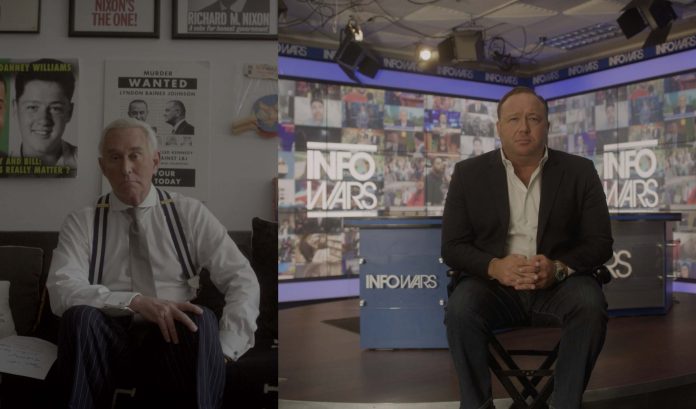 Most recently, El Ride Productions was involved in the release of journalist and author Mike Cernovich’s film Hoaxed. They also produced Oliver Stone’s 2015 film A Good American, which focused on NSA whistleblower Bill Binney’s time at the agency and how they used programs he developed to illegally spy on the American people.

As Roger Stone continues his high-profile legal battle to secure a new trial and judge, El Ride Productions has released their long awaited film Sensational, which chronicles the origins of sensationalism and propaganda.

According to a press release from the production studio, it also features Infowars founder Alex Jones, longtime Trump advisor Roger Stone… and commentary from fellow conservative journalists and media figures like Lee Stranahan, Lionel, and Florida based journalist Jacob Engels.

This is a time where we need to unite. Throw off your political beliefs…

Come together and fight the looming censorship. The corruption of our information system is tearing us apart.

Sensational follows the journey of citizen journalist Steven O’Rourke as he researches the history behind propaganda and sensationalism in the United States over the past century.

Throughout the film, viewers are taken down the rabbit hole of internet conspiracies and the expanding power of the “Deep State”. How far will the “Deep State” go in silencing citizen journalists who criticize them? Who are their allies and how powerful are they? What happens when you stand up to the “Deep State”?

The film is available on Vimeo and will soon be released on Amazon Prime according to the filmmakers. This Gateway Pundit reporter had the chance to watch a screening of the film several weeks ago and it was eye-opening. As someone who has researched sensationalism and propaganda for several years now, even the most knowledgeable on these topics have much to learn from Sensational. The origins of what we now know today as Fake News or propaganda have not ever been as thoroughly explored as they are in this very timely film.

Most recently, El Ride Productions was involved in the release of journalist and author Mike Cernovich’s film Hoaxed. They also produced Oliver Stone’s 2015 film A Good American, which focused on NSA whistleblower Bill Binney’s time at the agency and how they used programs he developed to illegally spy on the American people.

Barret Brown, a journalist with ties to Anonymous who was targeted by the “Deep State” for his release of hacked emails exposing the military industrial complex, also stars in Sensational. Charles Ortel, a researcher and journalist who was critical in exposing what he called the “false philanthropy” efforts of the Clinton Foundation and it’s related organizations, examines the power that was accumulated and misused by the Clintons through their “charitable efforts”.

“The project started in 2017 with interviews that become more relevant with every day that passes. Sensational features men and women from both sides of the political spectrum, but their messages were eerily similar. Everyone involved was concerned with the ever expanding powers of the ‘Deep State’ and the fact that when their power grows, our liberties and freedoms become increasingly diminished,” observed David Lugo, who directed Sensational along with Matt Schwartz.

RT’s Caleb Maupin, a self described Communist, and left-leaning anti-war journalist Max Bluementhal, provide their insight from the progressive end of the political spectrum in Sensational. Journalists Amanda Alcantra and Ellis Henican also provide their opinions on the origins of sensationalism and the state of journalism today in America.