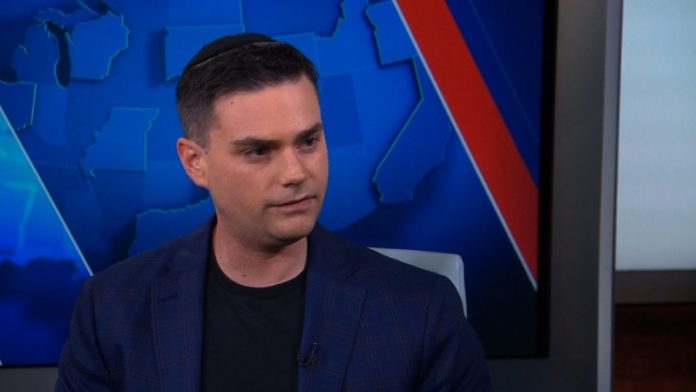 Conservative, INC… a collection of establishment GOP outfits trying to be relevant in the Trump era, love to promote Ben Shapiro as a leader in the America First era. However, Shapiro is an anti-Trump loser.

Years ago, Ben Shapiro’s shtick of debating campus liberals with his long-winded and condescending dissertations was mildly entertaining. At face value, he sounded like he really meant what he said. He challenged the idea of 67+ genders, a ballooning national debt and championed the freedom of speech. These are good things to dissect and discuss.

However, the Ben Shapiro of late should not be hailed as a leader in Trump’s Republican party or the America First movement. He routinely calls anyone who has an issue with continuing to provide a blank check to the extremely wealthy and self-sufficient state of Israel as a “Nazi” or worse. Shapiro has used his Twitter account to espouse pro-impeachment talking points and to slam President Donald J. Trump on numerous occasions.

In the current political climate, there can be no compromise or room for limp-wristed Republicans like Shapiro, who can’t even muster words when confronted face-to-face by people he has called Nazis. When he was confronted by Nick Fuentes outside a TPUSA event in South Florida, Ben “The Great Debater” Shapiro froze. His Conservative, INC allies and anti-Trump liberals then attacked the journalist who tried to speak with him.

Far-left campus groups attempted to stop the University of Central Florida SGA from allocating $17,875 in student activity funds to cover the final half of costs needed to facilitate Ben Shapiro’s March 23rd campus talk that is being hosted by the UCF College Republicans. Young Americans for Freedom, is reportedly covering the other half. Ultimately the UCF Student Government Senate approved the expenditure.

That’s the process and we have nothing wrong with that. Honestly, it sounds a little steep to me, but those were the costs that the Young Americas for Freedom and UCF College Republicans agreed to.

So why should both the left and right in Central Florida protest Ben Shapiro’s presence on the UCF campus?

1). Shapiro is not beholden to or rooted in any real core thought other than making money hand-over-fist. For both those on the left and the right, if you get in his way, Shapiro will work to de-platform you from social media and ruin your good name. He is a nasty and VERY SMALL individual in every sense.

2). He is comfortable behind the podium talking down to the audience or through his live-streams, but he can’t take even the slightest bit of criticism when forced to do so face-to-face. This demonstrates his cowardice and inability to engage in an actual debate. Yet has made a fortune claiming to “bring debate” to campuses across America. If you can only “debate” when the audience is subdued or exist online… is that really a debate?

3). To see Shapiro charge a fee of nearly $40,000 — even if some of that goes into covering security costs, is exorbitant and outrageous. That doesn’t mean the people who pay it or convince organizations to foot the bill are rubes… well it actually kind of does. A few things more worthy of nearly $18,000 of student funds; LITERALLY ANYTHING.

There are a litany of other reasons that could be listed for whatever side of the political spectrum you are on. On March 23rd, I will find myself standing in solidarity with the progressive left in Orlando as we protest Shapiro’s visit to UCF. They might resort to violence as they usually do.

Here’s to hoping somebody shoves a camera in his face. Ask him why America First means America First on everything, except when it comes to prioritizing our financial needs before cutting blank checks to self-sustaining nations like Israel or continuing the endless foreign wars in the Middle East? Why did he stand with Democrats during the impeachment process? Why does he want to deplatform and censor anyone who isn’t in bed with the moneyed special interests propping up Conservative, INC?

The rabid left-wing loons have their own questions… and they should ask them as well.