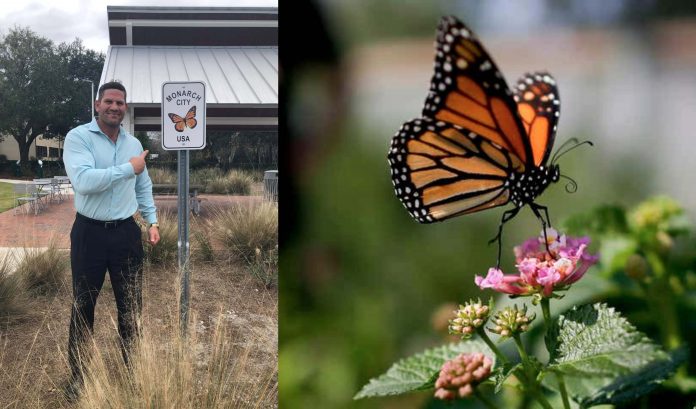 Efforts lead by Longwood Mayor Matt Morgan to earn a “Monarch City” designation for the City of Longwood proved successful last week when Longwood was named the first “Monarch City” in Seminole County.

Longwood Republican Mayor Matt Morgan has scored another victory for the residents of the City of Longwood, this time working with a non-profit dedicated to restoring the monarch butterfly population across the United States. Monarch City USA is based in Washington State and works to provide cities across the United States with the tools necessary to become a sanctuary for Monarch Butterflies.

“Establishing a monarch city in Seminole County is both good economically and environmentally. It increases pollinators, which in turn creates healthier plants and landscapes. This increases property values and the jump in pollinators also help reduce Co2 emissions, improving the quality of the air we breathe,” said Ed Young, the Chair of the Seminole Soil and Water Conservation District.

At little cost to the City of Longwood, Morgan’s idea to have Longwood designated as a “Monarch City” is an example to Soil and Water Chairman Ed Young of how he has spent his time as Mayor focusing on reforming Longwood from the ground up and becoming bogged down in one big building project or development plan.

Ultimately, all that was needed was some milkweed plants and an official sign to place at Reiter Park in Longwood, where the Monarch Butterfly sanctuary is located.

“Mayor Morgan’s efforts here another example of how he focuses on a lot of little things that strengthen a city, instead of legacy building projects that often cost too much and yield little to no results.”

When contacted by the Central Florida Post, Mayor Morgan said that he started working on this project several months ago.

“I knew our residents would be very passionate about this. To be recognized as the only monarch city in all of Seminole County is quite an honor. I know our entire city is very proud of these monarch butterflies at Reiter Park.”

“Not only is this something that our city can be proud of, but it my hope that other cities will follow suit. This is another big win for Longwood,” concluded Morgan.