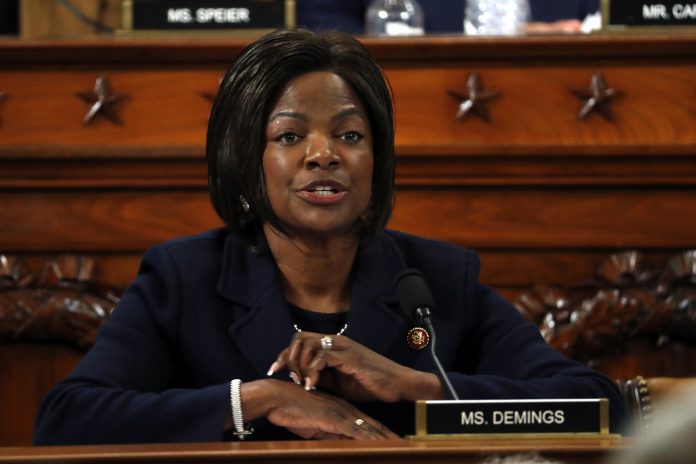 One of Pelosi’s impeachment managers has quite the history.

Orlando Congresswoman Val Demings has become on of the central figures in Nancy Pelosi’s impeachment proceedings against President Donald J. Trump. If you have followed her tweets or watched her performances on the House Judiciary or Select Committee on Intelligence, you understand that she is your run-of-the-mill deranged Democrat obsessed with removing Trump from office, despite the fact that he has committed no crimes or impeachable offenses.

What might surprise and upset many Democrats idolizing Demings? How about the fact that she begged to be seated with Roger Stone at an event I organized in Orlando several years ago? Demings, who had not planned on attending the Tiger Bay Club of Central Florida’s monthly meeting where I had booked Mr. Stone as a speaker, approached several people involved with planning the event at the last minute asking to be placed next to Stone as we ate lunch while the program began. As I made my way around the room, I even heard Demings asking Roger Stone for advice on campaign strategy in the upcoming 2018 election.

Demings gleaned what knowledge she could from the master political strategist and who could blame her, except maybe the entire House Democrat caucus and mainstream media who think Roger Stone is a literal demon who gave us President Trump, who they believe is Satan reincarnate. Congresswoman Demings colleagues should ask her why she would want to hold court with someone like Roger Stone. What did she know and why didn’t she beg for a meeting with Clinton strategist John Podesta instead?

For those that don’t know the Demings history… here are some of her “greatest hits”.

As the appointed Chief of Police for the City of Orlando, a job her well-connected husband secured for her, Demings left her department issued firearm in an unlocked police SUV where it was stolen and never to be found again. She is virulently anti-2nd amendment and a big believer in gun control, yet she couldn’t even control and secure her own pistol. Who knows how many crimes have been committed or people hurt because of her poor gun safety. Worse yet, according to the Orlando Sentinel, a duffel bag with ammunition, handcuffs and a baton were also swiped from Demings unlocked SUV. As a result, she was censured by the Orlando Police Department’s internal affairs division.

Before she had congressional ambitions, Demings raised and spent over $250,00k in a short-lived campaign to become the Mayor of Orange County. Instead of following state statutes and campaign finance guidelines, Demings made irregular reimbursements, almost entirely to well connected political consultants and insiders who already made hand-over-fist pimping her mayoral ambitions.

In the spring of 2017, when Demings was just settling in as a new member of congress, someone responded to a photo of her with anti-gun groups on Facebook with a question about her stolen gun. Here’s how Deming’s responded.

“My First Amendment right is different from yours.”

Now, as a member of congress, Demings refused to condemn or denounce the violent riots led by Antifa and other alt-left domestic terrorist groups in 2017.

“I thought it was a beautiful sight — as we encourage people to get involved, what direction and instructions and how can we have a more organized effort so that they can be a major tool in moving our agenda forward? Anyone who feels that they can answer this question? Thank you.”

In the wake of the Parkland shooting, President Trump took decisive action on many levels, including allocating funding from the anti-terrorism budget to allow for armed teachers to protect our students from mass shooters.

Following the firebombing of a government facility in Tacoma, Washington by a high-ranking member of Antifa, Demings ignored multiple requests for comment asking her to denounce the attack and label Antifa a domestic terrorist group.

From my reporting in the Central Florida Post. CNN’s Manu Raju confirmed her outburst in a tweet shortly after it happened.

According to our sources, Demings “shrieked like a harpy”, visibly upset that the criminal coup led by her and Adam Schiff was being derailed. How embarrassing!

This is one of the Impeachment Chieftains ladies and gentleman! If you needed any more of a reason to stand up to the deranged Democrats, this should make you extremely upset and motivated to take meaningful action. Central Floridians have long wondered what the result of an IQ test on Ms. Demings would return, with most of us concluding that she should be known as Val “Braindead” Demings.

So… where’s that gun Congresswoman Demings?

P.S.—Central Floridians are sorry for hoisting this harpy on you America. Just remember we gave you Walt Disney World and Universal!