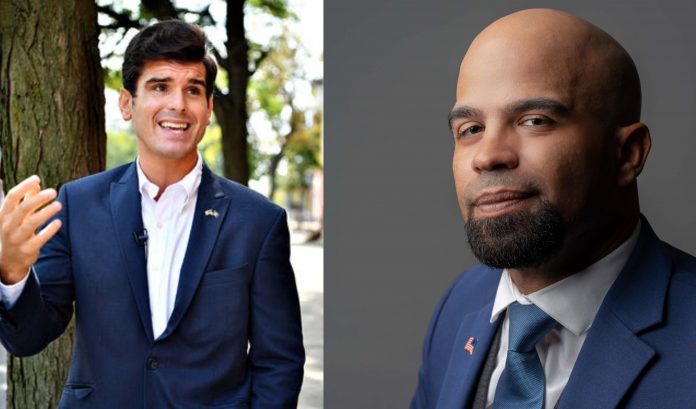 House Speaker Nancy Pelosi told the American people that it was a somber occasion. However, shortly after the Democrats delivered the only totally partisan impeachment against a duly elected president, Democrats were heard cheering and seen taking selfies.

Both Enrique Tarrio and Bobby Jeffries issued a damning rebuke of the impeachment vote moments after the gavel came down. Tarrio is a Cuban American Republican candidate and founder of the Proud Boys and is running for a South Florida congressional seat. Jeffries is a businessman who is mounting an aggressively pro-Trump campaign in Pennsylvania.

According to a release from Tarrio’s campaign that was sent to TGP, the first generation Cuban exile decried the Democrats for shifting America towards the type of hollow government that so many have tried to escape when fleeing from Socialist and Communist totalitarian regimes.

My family escaped Fidel Castro’s brutal dictatorship many years ago, but we didn’t all make it to the Land of the Free. At this very moment, I have relatives who are being held captive for daring to stand up and speak out. For daring to stand up against the political establishment in Cuba.

What they are still experiencing and what my family escaped is now the new normal in America thanks to Democrats like Donna Shalala. Refusing to settle our differences at the ballot box and resorting to sham trials is the very definition of treason. Anyone who has aided and abetted the efforts of the Democrats should be detained immediately.

Donald J. Trump is the duly elected President of the United States. He has committed no crime. I refuse to stand idly by while the Democrats and their handmaidens in the media ravage our nation with their deranged coup d’état.

Jeffries campaign issued a similar statement, calling the impeachment vote a new and sad chapter in the Democrats satanic saga of resistance against Trump.

Having gone berserk ever since the moment Hillary Clinton was defeated in 2016, the Democrat Party has made it clear with tonight’s impeachment vote that they no longer favor settling our differences at the ballot box. They wish to emulate their leftist idols of both bygone eras and present regimes, despots and dictators who use show trials to exact revenge on their political enemies.

Damn the constitution. Damn the facts. Damn you for questioning them. Damn anyone who stands against their violent and illegal resistance.

Every single Democrat member of the House of Representatives, and any witness who aided in this impeachment coup, should immediately be charged with treason. They have bastardized the rule of law to upend the election of Donald J. Trump as President of the United States.

We have entered an extremely dark chapter in this satanic saga against President Trump and all those who stand for his unifying America First agenda.

Earlier this month, Jeffries and Tarrio organized an America First Xmas Party ahead of President Trump’s historic rally in Hershey, PA. It was attacked by the hacks in the mainstream media and threatened by Antifa, leading to a last minute venue change.

Despite this, the event continued and was able to gather hundreds of dollars for local families in need this Christmas season. Speaking of Christmas, the “totally unbiased” Washington Post celebrated Trump’s impeachment with a in-your-face tweet wishing everyone a “Merry Impeachmas”.

Maybe they should be held accountable for their role in this mess as well.