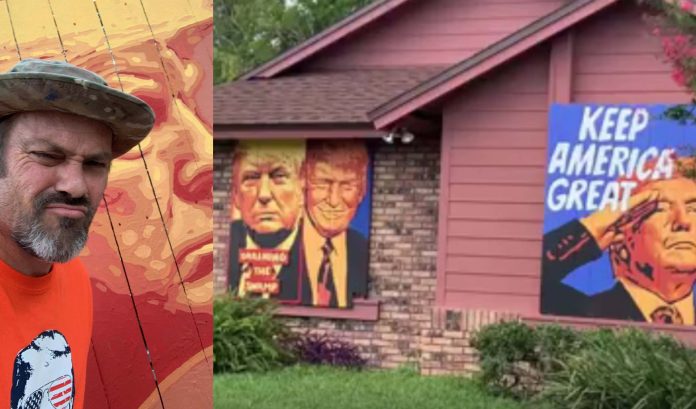 Jeff Sonksen, a prolific artist based in Central Florida, is well-known for not only his art but also his political activism. We profiled Sonksen during the 2017 Longwood City Commission elections.

As Hurricane Dorian inches closer and closer to Central Florida, Longwood resident Jeff Sonksen is making a statement while also trying to keep his home and family safe. Known for painting on wooden fence frames, he has won numerous awards over the years. It all started when he started painting a fence on his parent’s property that runs the length of a busy multi-purpose trail in Longwood, Florida.

After receiving compliments on his work, he continued to paint. Over the years Sonksen’s work has featured everyone from celebrities to fallen police officers across the nation. It has become known as “Paint The Trail”, amassing millions of views and tens of thousands of followers on social media. Following the election of Donald Trump as President, Sonksen started a new project called “Paint The Trump”, which he has described as one of his most popular series.

Earlier this month, Mr. Sonksen received the Key to the City Award from Longwood Mayor Matt Morgan, a former WWE professional wrestler and first time elected official. Sonkesn was one of Morgan’s most outspoken advocates during his campaign for Longwood City Commission in 2017, painting a replica of the Morgan that he would take to busy street corners to encourage his neighbors to cast their vote for the 7-foot tall, who promised to stand up to special interests, eliminate corruption and provide more funding for first responders.

We profiled Morgan’s campaign and Sonken’s involvement in this mini-documentary.

Ever since Sonksen revealed his Trump themed hurricane shutters in a video posted to his Facebook profile, it has garnered over 30,000 views. Reception has been “overwhelmingly positive” from his neighbors and he says that people keep stopping to take selfies and show their support for President Trump.

Watch the video… this is the kind of patriotism and culture we need in America!