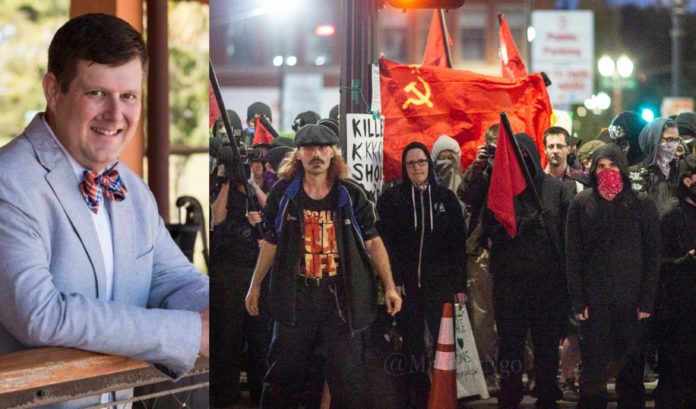 Lauren Poe, the alt-left Mayor of Gainessville, Florida tweeted his support for the domestic terrorist group over the weekend.

While every American with a conscious and ounce of sanity is denouncing the domestic terrorist actions of Antifa, Gainesville Mayor Lauren Poe is siding with the group known for their acts of violence. Hiding their identities behind black masks, Antifa has launched a campaign of violence that has spread across this country since the election of Donald Trump in 2016.

Recently, an Antifa leader firebombed an ICE detention center in Tacoma, Washington before being gunned down by police. Prior to that, independent journalist Andy Ngo, who identifies as a gay man, was beaten so badly during an Antifa gathering in Portland, Oregon that he was hospitalized due to a brain-bleed. The crazed shooter who left 9 dead and dozens injured in Dayton, Ohio was an active supporter of Antifa and their thirst for blood.

This past weekend in Portland, Oregon, a coalition of free speech activists lead by the Proud Boys and combat veteran Joe Biggs, organized the “End Domestic Terrorism” rally which aimed to get the United States government to label and acknowledge the group as domestic terrorists. Hours before the scheduled gathering, President Trump said he was watching the situation in Portland and that consideration was being given to labeling Antifa a domestic terrorist group.

Antifa showed the world once again that they behave like and hold all the characteristics of domestic terrorists. By definition, a domestic terrorist seeks to intimidate political opponents through acts of violence, and they brought a whole host of violence to Portland. The “End Domestic Terrorism” rally ended after less than an hour with a prayer and call to action directed at Portland Mayor Ted Wheeler to denounce Antifa and expel them from the city.

With most all organizers and attendees having already returned to an undisclosed location for a barbecue, Antifa singled out the remaining few on the streets of Portland. Two independent journalists were assaulted as they tried to cover Antifa, an elderly couple were left on the ground, beaten and maced by the group. As buses of activists presumably leaving the “End Domestic Terrorism” rally were spotted leaving, Antifa threw cinder blocks and other projectiles from afar, before breaking out the bus window and dousing passengers with mace. A man donning a Spartan style outfit was also assaulted and hunted on the streets of Portland by Antifa, despite the presence of his young daughter in patriotic garb.

In total, over a dozen violent radicals were arrested and numerous weapons were confiscated. Despite progressive Mayor Ted Wheeler and the mainstream media ginning up fear that the “End Domestic Terrorism” rally would bring violence to Portland, it was their own homegrown group of domestic terrorists that once again spread across the city in a violent wave of insanity.

The demonstration cost the city over $2million according to sources familiar with the figures. Proud Boys Chairman Enrique Tarrio, an Afro-Cuban, said that they would continue to visit Portland until Mayor Ted Wheeler denounces Antifa.

“Sooner or later, he will run out of money and his counterparts in government will no longer take him seriously. The path forward for Mayor Wheeler is simple, free your city from the grip of Antifa, take direct and meaningful action. Otherwise, the citizens will grow weary of you wasting tax dollars and the time of first-responders with your ridiculous political posturing. Declare Antifa an enemy of Portland and restore order. The American people will thank you and the people of Portland will thank you,” concluded fellow organizer Joe Biggs, a combat veteran who was twice awarded the Purple Heart.

With Mayor Poe openly praising the actions of Antifa, one has to wonder if Gainesville could be the site of a future “End Domestic Terrorism” rally in the coming months. Ironically, Poe was able to condemn white nationalist Richard Spencer as a terrorist, yet he is unable to do the same with Antifa. All sane Americans can agree that Richard Spencer’s white nationalism is disgusting, as is Antifa’s domestic terrorist activities. Why Mayor Lauren Poe cannot reach that same conclusion should worry the citizens of Gainesville to no end. How long before Mayor Poe allows Antifa to march through the streets of Gainesville wreaking havoc on citizens and destroying property?

We attempted to get further comment from Poe and his colleagues on the Gainesville City Commission, with all but one of the elected officials refusing to respond to our questions. Even though Commissioner Helen Warren offered a response and condemned violence, she refused to name Antifa and condemn their actions directly.

Instead, Commissioner Warren alleged that my efforts to get her and the other commissioners on record condemning Mayor Poe’s praise of Antifa and the organization as a whole, were “disingenuous” and “baiting.” If Commissioner Warren believes that, shame on her. Even though that is not what I was doing, if it was, the fact that any elected official would need to be baited into condemning Antifa as a domestic terrorist group is disturbing.

Gainesville has long been known as a hot-spot of progressive and alt-left activities, with numerous radical groups operating in and around the University of Florida and Sante Fe College, where Mayor Poe doubles as a professor.

This is a breaking story.