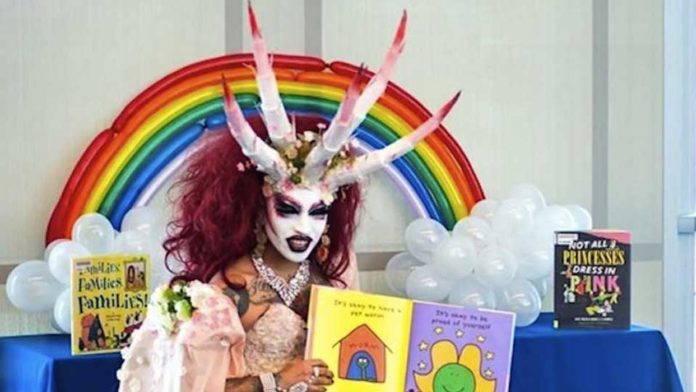 The LGBT community, of which I am part of, has consistently been pushing the idea of “drag kids”, with the most well-known example being “Desmond Is Amazing”, a 12-year old boy who has been allowed to perform in drag at seedy nightclubs with grown men throwing money at him.

Following a nationwide push, the Drag Queen Story Hour phenomena will return to Central Florida on July 18th. According to the official Facebook page for DQSH, local drag queen Gidget Galore will read aloud for children “Pink Is For Boys”, a short story written by anti-Trump author Robb Pearlman.

DQSH events have been heavily criticized in the past few months for sexualizing extremely young children with suggestive readings or dancing. At one event, children were allowed to lay upon a drag queen. One drag queen storytime reader was found to have previously been charged with assaulting a child under the age of 14.

Some have engaged in mentally deranged demonic screeching and other crazed outbursts that are just flat out weird.

The LGBT community, of which I am part of, has consistently been pushing the idea of “drag kids”, with the most well-known example being “Desmond Is Amazing”, a 12-year old boy who has been allowed to perform in drag at seedy nightclubs with grown men throwing money at him.

This type of behavior is clearly child endangerment, as no pre-teen should be performing late at night at sex obsessed nightclubs.

As far as DQSH goes, the stories that are read aloud range from mostly innocent discussions on being whatever you want to be, to hyper-sexual tales of gender fluidity and sexual appetite.

While the registration for the July 18th Orlando event at the LGBT Center in Orlando has now closed, we hope that media watchdogs are allowed to monitor the stortytime to make sure that sexually explicit content or adult activities are not allowed to occur around school children, some who might be as young as two years old.

I love a good drag show and have attended my far share of them in my adult life… IN MY ADULT LIFE. Forcing discussions of sexuality and gender-fluidity on children so young that they themselves don’t even know who they are or what they want to be is indoctrination in its rawest form.

Frigid stage mothers who sexualize their young girls by parading them around the country in one suggestive outfit after another, even going as far to approve cosmetic surgeries at young ages, is no different to me. Parents who put their children in compromising situations in the pursuit of Hollywood are also just as bad.

How about we let kids be kids. If they want to play with barbies… go for it! If they prefer pink over blue or vice versa… OK!

However, we should let them naturally reach their own conclusions in life, because it is their life. It doesn’t belong to their super-woke social justice warrior parents who are trying to virtue signal how “inclusive” they are.