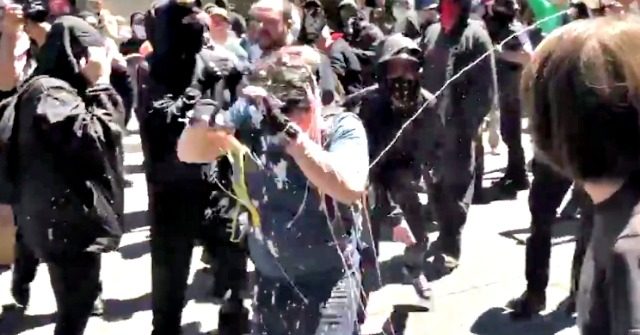 Ngo has become a frequent target of Antifa online because he captures their violent outbursts on camera, showing the American people and the world in whole how unhinged and out-of-control the domestic terrorist group has become since the election of Donald Trump.

Andy Ngo, who frequently covers the violent alt-left group Antifa in the Pacific Northwest, was beaten and bloodied by a gang of masked members of Antifa on Saturday in Portland, Oregon, an ANTIFA breeding ground.

Ngo was attacked during Antifa’s counter protest of the Proud Boys, a men’s fraternal organization known for protecting conservative speakers and celebrities from violent leftists across the United States.

Labeled a domestic terrorist organization by the Department of Homeland Security, Antifa is largely allowed to run amok across the United States with no pushback from law enforcement. Key members of the mainstream media and progressive movement have cheered on their violent tactics, even when the group attacks journalists and the elderly.

Ngo has become a frequent target of Antifa online because he captures their violent outbursts on camera, showing the American people and the world in whole how unhinged and out-of-control the domestic terrorist group has become since the election of Donald Trump.

Antifa famously set D.C. ablaze during Trump’s inauguration, leaving the city in shambles and even torching a limousine belonging to an innocent immigrant just trying to earn a few bucks during the festivities that drew tens of thousands to our national capitol.

Video posted on Twitter shows Ngo after the beating with a busted eye and other cuts on his face. Evidence from previous videos during his livestream showing him being pelted with milkshakes on multiple occasions.

An independent video documents the beating that left Ngo without his recording equipment, as masked Antifa assaulted him with their fists and other projectiles, posted by a reporter for the leftist news outlet The Oregonian.

This is a developing story.

Jacob Engels is an Orlando based journalist whose work has been featured and republished in news outlets around the globe including Politico, InfoWars, MSNBC, Orlando Sentinel, New York Times, Daily Mail UK, Associated Press, People Magazine, ABC, Fox News, and Australia’s New Dawn Magazine and Gateway Pundit. Mr. Engels focuses on stories that other news outlets neglect or willingly hide to curry favor among the political and business special interests in the state of Florida.