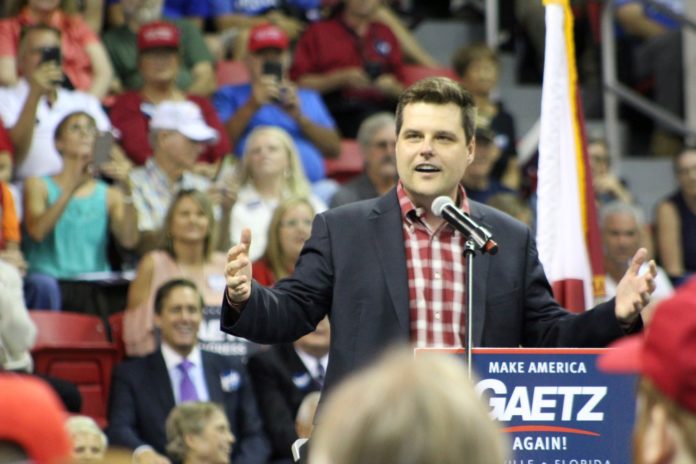 While exiting a community event in his district, the North Florida Congressman had a drink hurled at him by an unkempt female leftist.

Another day and another manifestation of the Democrats and media’s deranged calls for violence against President Trump and his supporters. The latest victim? High-profile pro-Trump Congressman Matt Gaetz.

Mr. Gaetz was holding community events in his district all weekend without incident and to rave reviews from nearly every attendee for his willingness to freely discuss things important to his constituents. That peace ended when Gaetz was exiting Brew Ha Ha neighborhood eatery at the conclusion of one of his last events before returning to DC.

Amanda L. Kondrat’yev, a former far-left Democrat opponent of Gaetz, then threw a milkshake at Gaetz as he was surrounded by a throng of alt-left activists incoherently chanting and waving signs outside the dining establishment. She has since been arrested and released by police.

I think this is the first time the “milkshaking” anti-far right protests in Britain have crossed the pond. https://t.co/NYTXIP077H

The act of throwing milkshakes at conservative politicians started over the course of their recent elections, with violent confrontations perpetrated by left-wing activists following in close succession. The attack on Congressman Gaetz is the first time a conservative figure in the United States has been targeted.

We have discussed how alt-left activists will get violent and be supported by the mainstream media in Orlando during Trump’s upcoming rally at Amway Center. Do not be surprised if you see similar attacks from mentally deranged anti-Trump loons, who will likely face no consequences and be labeled heroes.

It starts with a milkshake and will end with a bullet… remember that. As the media and Democrats cheer this behavior, we must realize how it will continue to push this country to the brink of civil war. At a certain point, conservatives will become fed up with being the punching bag.

If a Trump supporter did this to a Democrat or progressive activist, they would be crucified non-stop and charged to the fullest extent of the law.