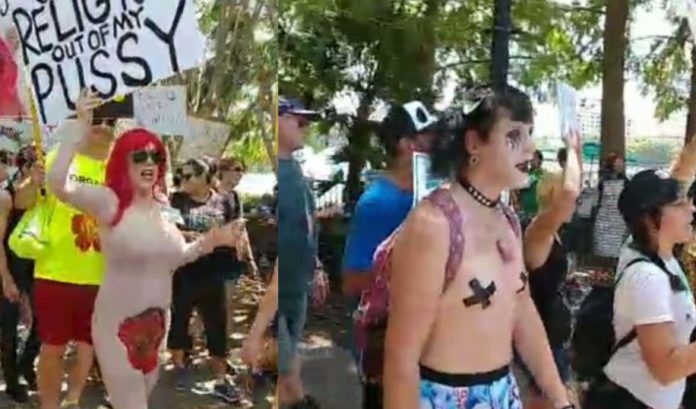 Let me start this article by stating that I care very little what other humans do with their bodies. I personally do not believe in the practice of abortion, but also do not believe in government regulating our body. If what you are doing with your earthly being does not creep into my life, get on with it. That being said, requiring individuals who are seeking abortions to be acquainted with the pros and cons of the procedure doesn’t outlaw abortions any more so than your doctor explaining side-effects of your anti-depressant medication outlaws mental health treatment.

Watching the unabridged live-feeds of Sunday’s pro-abortion / women’s rights / come half-naked dressed like a weirdo march at Lake Eola in Downtown Orlando was bizarre to say the least. “Women” (if that is the gender they identify as today), were dressed in bloody underwear outfits and some with little clothing at all. Sensible cries for reproductive rights (whatever that means), were replaced with profanity laced rants about government regulating the nether regions of creatures that appear to have not been touched romantically in some time.

One has to wonder… does he not see the pro-life demonstrators as human enough to cover, or does is he so far into the crotch of the abortionist movement that he can’t even see his surroundings? Either answer makes it clear that he no longer functions as a journalist, but as an alt-left apparatchik more concerned about HIS idea of social justice.

This doesn’t surprise me, as Xander Peters was busted months ago stealing my work and reporting on it as his own, a major crime in journalism. When confronted, he said that he only links to “actual journalism” outlets, claiming that absolved him of his third rate content burglary. Like so many in the mainstream and alt-left media, Mr. Peters has a hard time with self-reflection. As long as he is “owning Trump” and discovering imaginary Nazis / Russians under his bed… little else matters.

I have always been exactly what I am. A recovering politico who bought a newspaper and decided to start covering the news instead of paying others to do so. I’ve covered local businesses and broken dozens of major stories that have garnered international attention. At Xander’s own game, I have made more of a mark than he has, though I admit I haven’t spent nearly nine years as a low-rate intern writer. At that game, Mr. Peters has me beat.

What is most disturbing about this behavior from the Orlando Weekly and their writer is not that it is unprofessional or against journalistic ethics, it’s that they actually think they are being professional and minding journalistic standards. They are activist writers, nothing more and nothing less. It’s nothing to be ashamed of.

Keep on resisting Xander, let’s see how you do during the 2020 campaign cycle. Something tells me another internship might be in your future. The 15th one is the charm right?